Microsoft has launched an anti-Google campaign, suggesting its rival’s privacy policy changes “make it harder, not easier, for people to stay in control of their own information” and arguing Hotmail, Bing and Internet Explorer are better options. “Putting People First” is Microsoft’s somewhat opportunistic attack on the search giant, a series of newspaper adverts alleging that, despite Google’s claim that it’s gathering no more data than before, in reality the changes are designed to increase “how valuable you at to an advertiser.”

“Every data point Google collects and connects to you increases how valuable you are to an advertiser” Microsoft argues. “To be clear, there’s nothing inherently wrong with wanting to improve the quality of an advertising product. But, that effort needs to be balanced with continuing to meet the needs and interests of users.”

Microsoft isn’t the first to take issue with Google’s changes. Privacy advocates reacted strongly to the streamlined privacy policy, which combined the majority of the company’s product policies into a single document, and members of the US Congress followed up with questions of their own.

“The changes Google announced make it harder, not easier, for people to stay in control of their own information. We take a different approach – we work to keep you safe and secure online, to give you control over your data, and to offer you the choice of saving your information on your hard drive, in the cloud, or on both” Microsoft

That’s something Google denies vehemently, claiming that despite the tweaks its “approach to privacy has not changed.” We’re expecting to see a response to Microsoft’s promotion from Google soon. 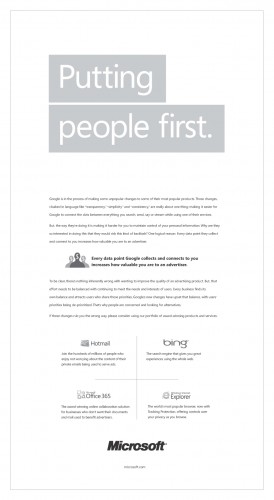