We’ve heard recently that Microsoft was rumored to release its latest Office suite on January 29, and it looks like that’s actually the case, thanks to a tweet by the Microsoft Office Twitter account, as well as a new landing page on Microsoft’s website for Office 365, both of which mention a January 29 release date.

According to the tweet, it looks like Microsoft will be launching Office 2013 and Office 365 tomorrow in Bryant Park in New York City. Microsoft released Office 2013 to manufacturing on October 11 last year, and they made it available to MSDN and TechNet subscribers later on. The company has been pointing to Q1 2013 release date for awhile, and now its finally official. 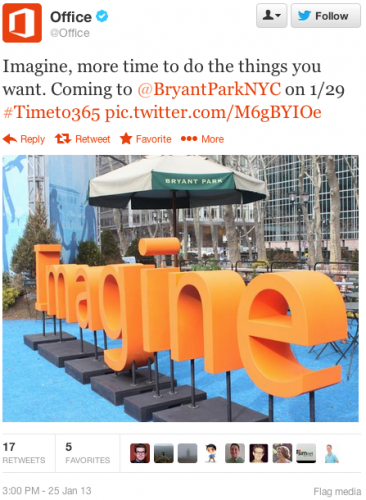 Office 2013 has been available for the Surface tablet for some time, as well OEM Windows 8 machines, but tomorrow will mark the point where desktop users who don’t have the new Office suite will finally be able to grab a version for themselves, as well as take advantage of the new Office 365 subscription service.

Back in November, we were teased with a few leaked screenshots of Office for iOS and Android. While we haven’t heard anything on that front for awhile, we’re curious if Microsoft will make the apps available tomorrow, but we also won’t be surprised if they wait a little while to make the software available on mobile devices. Also, just recently, Microsoft and the City of Chicago signed a deal that would see some 30,000 city employees move to Office 365 for their communication needs, a deal that will see the new subscription service jump to a great start right off the bat.