HoloLens 2 is here, and while we may not be quite the target audience Microsoft has in mind, you’ll forgive us if we get excited about the mixed-reality headset all the same. The second-generation AR wearable promises improvements in comfort, functionality, and software, but there are some key areas where the differences will really add up.

Looking at the first HoloLens, it’s a surprise that any consumer was tempted by it. If the price wasn’t enough to put you off, the fact that it was a huge, bulky headset tipping the scales at 1.3 pounds probably would. Happily Microsoft has addressed that, as best it can, in this second-generation design. 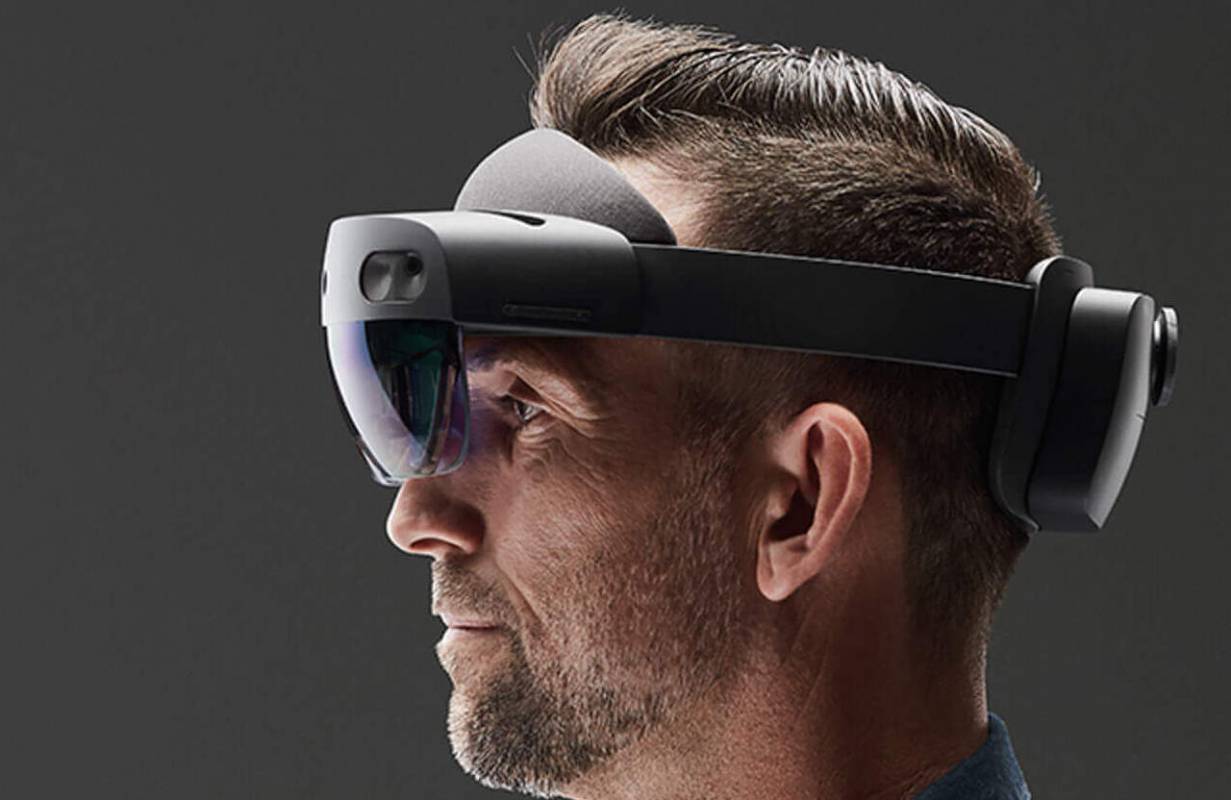 It’s smaller overall, of course, and less bulky. The width has narrowed down, which helps a lot, even if there’s still plenty going on at the front and the back. But what matters more is how the weight is distributed.

Microsoft needs to fit a full Windows 10 PC inside HoloLens 2 still, and so it looked to different materials to change how the balance of the headset is arranged. With a carbon fiber front housing, the center of gravity has been shifted back, closer to the center point of your head. Smaller displays mean that housing can be smaller overall, too, and the front visor now flips up so that you can make eye-contact without taking the whole thing off.

You’re still not going to blend in when wearing HoloLens 2. This is no sunglasses-like smart glasses product, as we’ve been promised by numerous startups (and then, it’s important to point out, typically let down when those startups discover it’s easier said than done). Still, for Microsoft’s target audience the ability to wear HoloLens 2 for more extended periods without discomfort is huge.

The HoloLens 2 field of view change is key

A smaller, lighter headset would only get you so far: HoloLens needed a big step forward in its optics for the second generation. Arguably the biggest complaint those using the first-gen HoloLens had was field of view (FoV). That’s what defines how much of the scene in front of you can also feature digital graphics.

Microsoft’s promotional videos proved to be somewhat misleading here. If you watched a HoloLens demo on YouTube, you’d be forgiven for thinking that the experience of wearing the headset was like being surrounded by an immersive digital world. The reality was a lot less impressive.

Of the clear front visor, only a small proportion was actually transparent display. It meant that, while looking straight ahead you could see digital objects interacting with the real world, if you turned your head a little they’d disappear, or at least get cut off. The first-gen had a 34-degree diagonal, 16:9 aspect field of view, but the new HoloLens 2 expands that significantly.

In fact, according to Microsoft’s Alex Kipman, HoloLens has increased the FoV to 52-degrees diagonal. The shape of that display portion has changed, too: most of the increase is vertical, making it less like you’re looking through a letterbox slot at the digital world. In fact, Kipman says, Microsoft has doubled the FoV from HoloLens to HoloLens 2.

To be sure, we’re still some way off from a completely immersive experience. HoloLens 2 will still suffer from disappearing digital graphics, that drop out of view before you’ve fully turned your head away from them. Still, it’s a huge improvement, and should make a big difference to how usable the mixed-reality headset is.

Even with its limited FoV and its heft on your head, HoloLens’ ability to intermingle the digital with the real could still be beguiling. Problem was, those teasing holograms were still pretty much out of reach. The first-generation hardware could do some basic hand-tracking and gesture recognition, but there was no way to specifically place holograms into users’ hands.

That all changes with HoloLens 2. Now, the headset can not only track your hands in 3D space, but each individual finger. You’ll be able to reach out and pinch a holographic slider between your fingers to manipulate it, or play a virtual piano keyboard. HoloLens 2 will also be able to lock holograms to the location of your hands, so that a virtual object will stay floating in your palm even as you move around the room.

It’s likely to make a huge difference to how HoloLens 2 holds up in everyday use. You can directly manipulate holograms now – dragging them out to make them larger, twisting them to turn them around, and pushing them away when you’re done – rather than gesturing more generically and having them act at a remove. Eye-tracking, meanwhile, means HoloLens 2 knows what you’re looking at. If you want to write a message, just looking at a text box would be enough to select it.

A different type of Windows 10 PC

There’s a war going on inside PCs of late, and HoloLens is no different. Whereas the first-generation headset used an Intel Cherry Trail SoC, HoloLens 2 sees Microsoft mutiny and opt instead for an ARM-based system. Specifically, it’s Qualcomm’s Snapdragon 850.

If you’ve been watching the mobile chipset space for any length of time, it’s a transition that probably won’t come as a huge surprise. Smartphone processors have increasingly been counting high-resolution graphics, 3D sensor compatibility, and multiple display support among their talents, all while keeping power frugality at the forefront of their concern. Apps and services that would typically require a discrete GPU when using an x86 CPU from Intel or AMD, can often be handled by the onboard graphics of an ARM-based SoC.

Sure enough, HoloLens 2 does just fine with the Snapdragon 850’s Adreno 630 graphics, though Microsoft does drop in its second-generation holographic processing unit, or HPU, as well. Together they take the input from the Azure Kinect sensor, the accelerometer, gyroscope, and magnetometer, and the 8-megapixel camera, and work out how the holograms will fit into the real world.

Battery life is expected to say roughly the same as before, so figure on around 3.5hrs on a charge. That may not sound like much, but it’s probably pushing quite how long you’d want to wear HoloLens 2 for in a single stretch, even with the new headset’s ergonomic improvements.

Not for consumers, but we’re getting there

HoloLens 2 is still expensive. $3,500, in fact, and though Microsoft is offering a monthly deployment option at $125/mo, it’s still out of the reach of most consumers. Then again, that’s not the target audience. 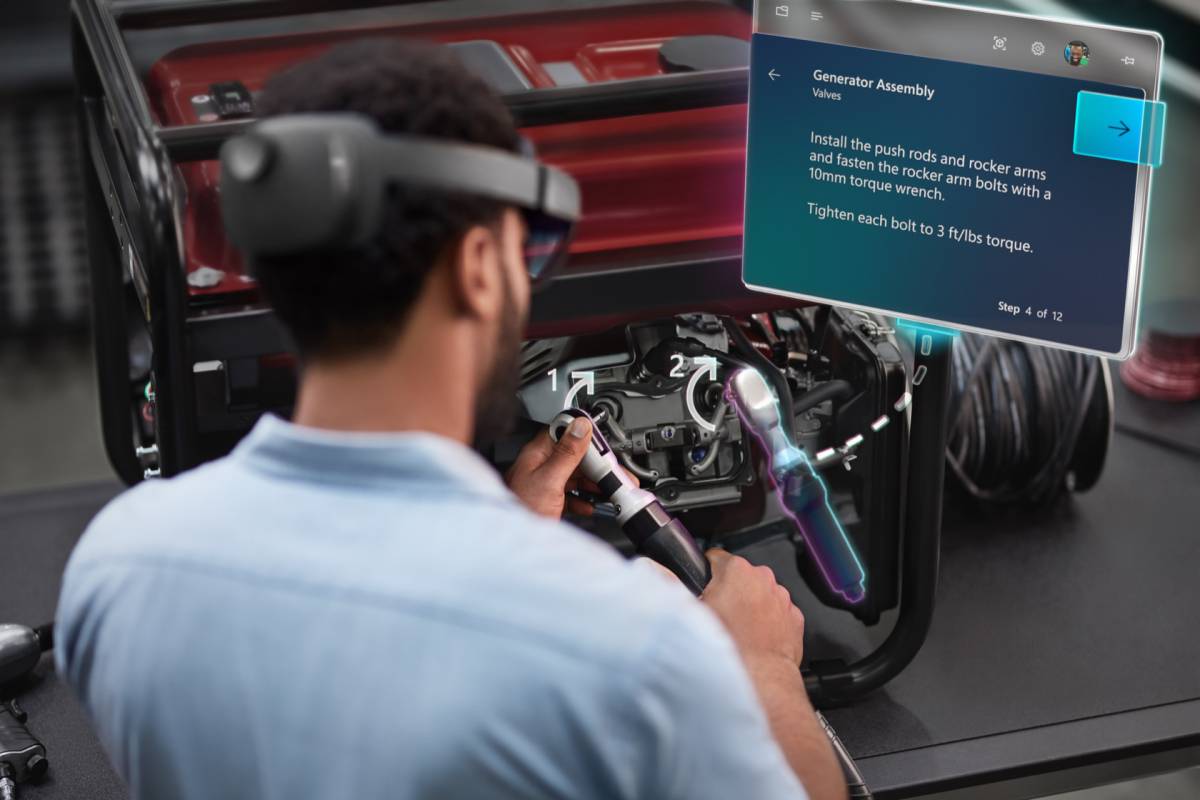 If the original HoloLens was intended to prove there was, in fact, a market for mixed reality, and give developers the hardware required to code successfully for that market, then HoloLens 2 is about broadening the deployment of that code. Features like Dynamics 365 Remote Assist, which will make supporting field workers more straightforward, and Dynamics 365 Guides, which brings a holographic trainer onto the shop floor, production line, or classroom, are perfect examples of where Microsoft sees its mixed reality vision developing.

Down the line, of course, it’s hard not to get excited about HoloLens’ potential for consumers. Mozilla will have a version of the Firefox browser for the headset, it’s been confirmed, while Epic Games has committed to native HoloLens compatibility in Unreal Engine 4. We may not have Fortnite for HoloLens 2 quite yet, but clearly that’s the rough direction we’re headed in.