Just as vocal as the enthusiasm around the new Xbox One reveal were those who thought the console looks like an old VCR; now, Microsoft is fighting back with an explanation as to why, exactly, the next-gen hardware is designed the way it is. Billed as “a new approach to design“, the process of crafting the Xbox One, the matching Kinect, and the wireless controller involved 200 gamepad models, over a hundred sensor-bar mock-ups, and “dozens and dozens” of console prototypes, before the so-called “liquid black” finished product was arrived at.

“Liquid black” sounds like marketing-speak at its finest, but Microsoft argues that it’s a legitimate color scheme strategy. Although the Xbox One has been accused of being slab-sided and drab – especially compared to the stealth-bomber aesthetic of its predecessor, the Xbox 360 – that aesthetic is actually intentional so that the hardware blends in and lets the gaming and entertainment experiences take the fore, Microsoft says.

“The console and Kinect sensor are liquid black so they melt into the background when being used, allowing the content on your TV to dominate the living room. The user interface is overlaid on the same shade of deep black so that the content tiles on the dashboard are more vivid and easier to navigate and interact with” Microsoft

It also echoes the squared-off and crisp-edged design of the Metro-influenced Xbox software, complete with the Live Tiles familiar from Windows 8 and Windows Phone. There, Microsoft’s team took the 16:9 widescreen aspect ratio as its guiding light, making sure that buttons and graphics all “derive their size and shape from various fractions of a 16:9 space” just like the console itself has its own symmetry.

“The console is evenly divided between the matte and gloss –the front in particular clearly reflects this symmetry– and the top brings together two even rectangles, where the vent panel’s edge detail matches the appearance of a selected tile in the user interface” Microsoft

Some of the details may have to wait until the console is on the market to actually be appreciated fully. Microsoft is particularly proud of its injected-resin A/B/X/Y buttons, which have high-contrast colored material pumped into them to mark out their function. 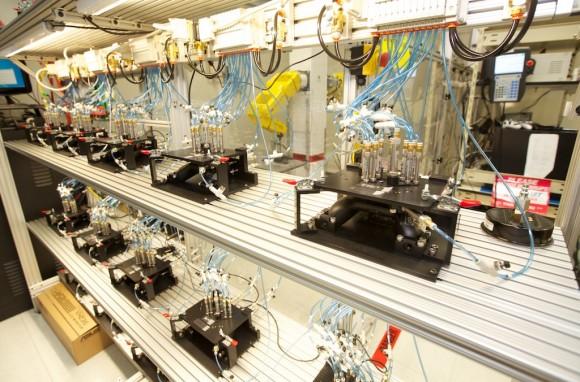 This renewed focus on design borrowed some of the processes Microsoft had already used for its Surface tablet, including heavy use of 3D printing and rapid prototyping. In fact, Microsoft says, the design team was able to cook up a 3D model in the modeling shop and then send it next door, where the engineering team could give feedback on how practical it was. 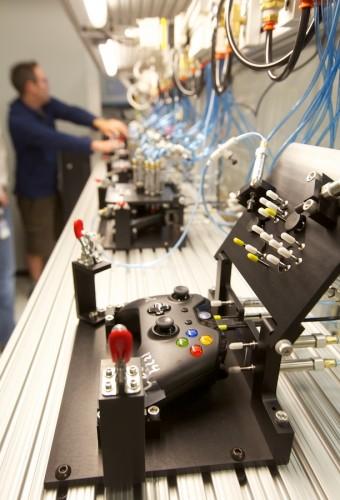 Even with all Microsoft’s focus on how the hardware looks, it’s unlikely to satisfy all of the company’s critics. The discussion will only get louder when Sony finally shows off what the PlayStation 4 looks like. Still, whether gamers will end up noticing the hardware once they have everything plugged in and are getting to grips with shouting at their Xbox One, battering the control pad, and waving their arms around in front of the Kinect remains to be seen.