This week we’re not the only ones getting pumped up about the release of Metal Gear Solid V: The Phantom Pain. One fan has gone the extra mile to customize their PlayStation 3 for the release. While we’re a bit more partial to the shape of the PlayStation 4 at this point, the customization of this PS3 unit makes us wish we’d had the time to make such a beauty a reality. Sprayed and painted, brushed and polished, this is the coolest (unofficial, one of a kind, believe it or not) MSGV:TPP PS3.

This unit has custom shined struts to sit gloriously up upon. It has sprayed maroon tops and bottom bits. It has a golden right side and golden disc cover. The PlayStation logo has been fully buffed and shined. 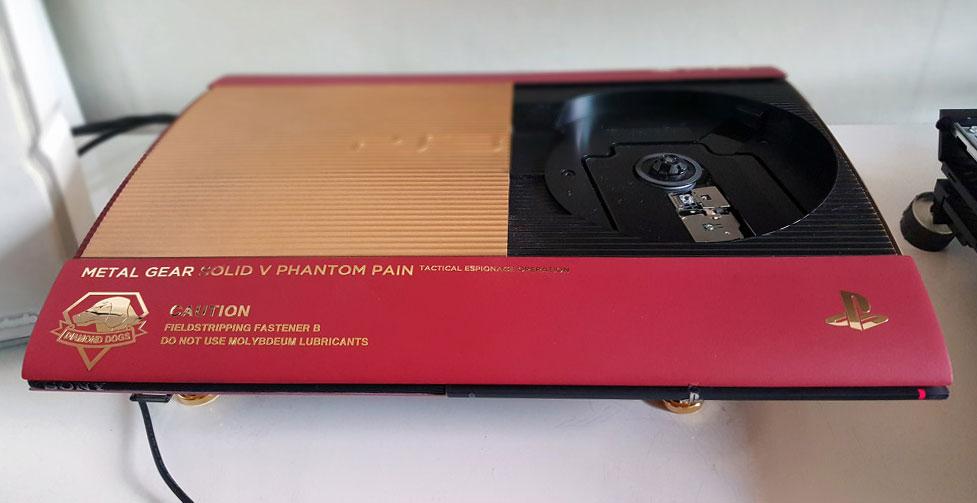 This creator has gone so far as to cut their own Diamond Dogs logo and apply text from the game unto the unit. Behold the mighty power of super-intense devotion to the series.

Stick around for our final extended review of Metal Gear Solid V: The Phantom Pain for PlayStation 4 here on SlashGear next week!

The final release of Metal Gear Solid V: The Phantom Pain is set for September 1st, 2015 for PlayStation 4, PlayStation 3, Xbox One, Xbox 360, and Windows PC. If this glimpse of a customized piece of hardware isn’t enough for you, have a peek at the strangest (official!) customized hardware of all.