A hot finger and a set of smart glasses could change the way we interact with the digital world, with Metaio tackling augmented reality interaction by turning every surface into a virtual touchscreen. The company’s Thermal Touch system uses infrared and regular cameras to track the heat signature left when the user touches a surface, whether that be a display or a wall, and then overlays digital content on top.

Of course, for that digital content to actually be applied, the user will have to be using some sort of augmented reality eyewear, like Epson’s Moverio BT-200. Another possibility is holding up a tablet and looking “through” its camera feed at the augmented view, though that’s obviously somewhat more clunky an implementation. 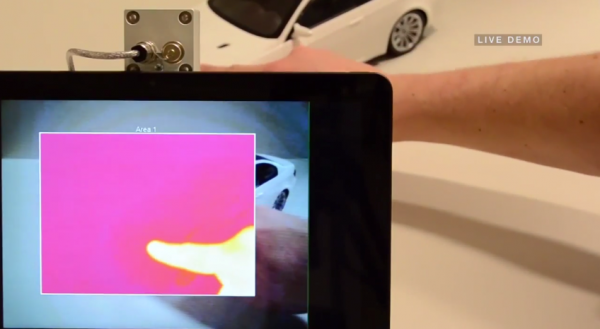 Traditionally, augmented reality tracking relies either on glyphs of some sort – such as QR codes – or computationally-intensive object recognition. Meta’s Meta Pro headset, for instance, can track individual fingers, by differentiating them from the background scene.

Metaio’s system relies on heat instead, and the difference in temperature between a fingertip and the surrounding area. With it, you could touch a physical model and have digital graphics added to that point as you look at it through your semi-transparent wearable display, for instance, or treat a blank wall like a huge touchscreen.

Thermal Touch is, Metaio admits, not yet ready for primetime. The company estimates that, even if wearables firms jump on heat as a tracking system, it may be 5-10 years before we see infrared cameras fitted as standard on devices.