Mercedes’ self-driving car is in San Francisco, but it’s still on the leash

Mercedes-Benz may have brought its self-driving F 015 Luxury in Motion car to the streets of San Francisco unexpectedly, but so far the autonomous concept hasn’t been let off its human leash in the city. The F 015, unveiled back at CES in January, was spotted over the past few days in a variety of locations around the West Coast city, and though Mercedes apparently used a trailer for the main transportation, several bystanders reported seeing it in action. At the time, however, the concept’s silvered windows meant it wasn’t possible to see whether a human or a computer was at the wheel.

In fact, while the F 015 Luxury in Motion is indeed capable of plotting and following its own route, Mercedes-Benz confirmed to SlashGear today that so far on the San Francisco trip it’s been a regular driver in charge.

The self-driving concept has both a normal steering wheel and pedals where you’d expect to find them, though they can retract when the F 015 is switched into autonomous mode. Then, the front seats rotate around to face the rear, turning the interior into a “lounge” mode with a central table that slides into place. 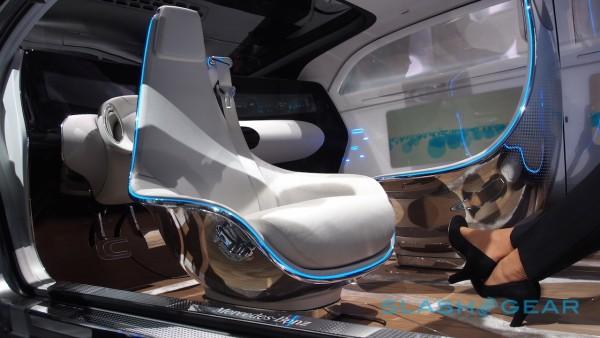 According to the company, the F 015 has been brought into the Bay Area so that the engineers at the nearby Mercedes-Benz Research & Development center in Sunnyvale can work on it and its self-driving technologies.

However, since Mercedes couldn’t resist a photo opportunity, the car was also taken out to a number of locations in the city so that footage could be recorded.

Although the F 015 Luxury in Motion is never going to get the green light for production in its current form, that’s not to say the systems it relies on to bypass the driver won’t show up in future models. Mercedes already uses similar road-tracking technology for lane-detection and intelligent cruise-control, for instance, available on cars like the S-Class.

Some of the concepts more outlandish tech seems unlikely to show up any time soon, however. The laser-firing front grille, for instance, which projects a crosswalk for pedestrians is probably not going to be an optional extra on production cars, while the ability of the interior windows to show virtual scenes rather than what’s actually going past outside only really makes sense if those inside don’t really need to see the road at all.