CES 2015 has been dominated by automotive news, but arguably overshadowing it all was Mercedes-Benz’s F 015 autonomous concept. Dubbed “Luxury in Motion” and bringing decades of self-driving research to life in a vast working prototype, the eye-catching car delivered CEA president Gary Shapiro to Mercedes’ opening keynote, and previews the same technology that the company hopes to deliver to its customers in the coming years. There’s more than just doing away with the driver, though – read on for four of our favorite features.

It still has a steering wheel

Mercedes isn’t trying to kill driving pleasure, just make sure it gets saved for the very best roads. At over 17 feet long the F 015 is hardly going to be a canyon carver like the Mercedes-AMG GT S, but for those roads too fun to be left to the AI, a driver can take over. 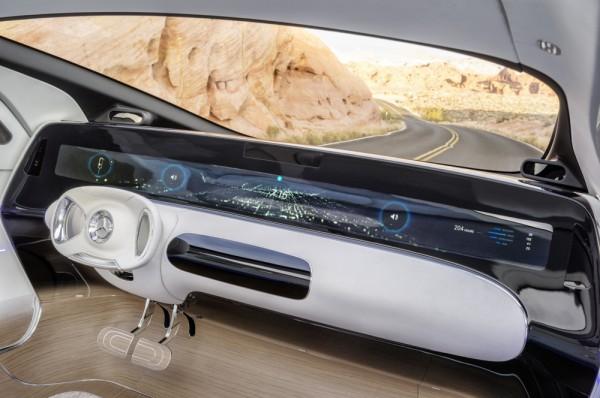 Hit a button and the white leather-clad steering wheel extends out from its stowed position in the dashboard, and then you can take manual control. The pedals are almost too beautiful to stomp on, with their aluminum and real wood inlays, but with 272 HP and 295 lb-ft of torque the F 015 can still run 0-62 mph in a matter of 6.7 seconds.

On the outside, meanwhile, the whole front grill changes from blue, signifying autonomous mode, to white, letting other road-users know that there’s a human at the wheel.

It may seem more “James Bond” than “Home, Jeeves”, but the F 015 includes a laser integrated into the front grill. Mercedes isn’t using it to vaporize traffic jams – even if you’re not driving it yourself, you’ll still have to suffer through the road congestion like regular car users – but to help pedestrians co-exist with autonomous vehicles. 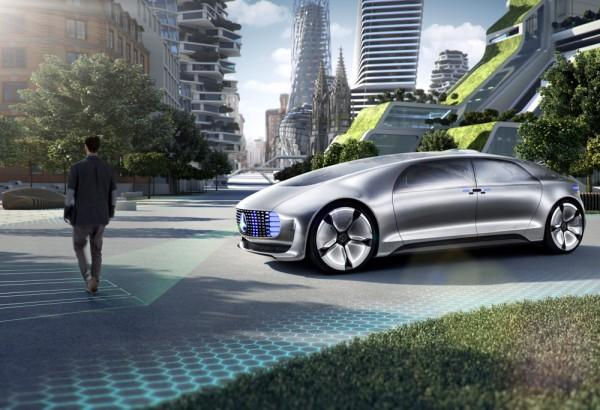 Since the F 015 lacks the non-verbal cues a human driver would share with a pedestrian hoping to cross the road, like eye-contact to acknowledge they’ve been spotted, and perhaps a friendly hand-wave to encourage them to cross safely, Mercedes has given the concept the digital equivalents.

A crosswalk can be projected onto the road, like an oversized version of the red laser keyboards that were briefly popular at one point, and the LED grill follows them with an illuminated patch as they cross, for a little reassurance that the car isn’t going to suddenly surge forward. The F 015 even speaks, an external speaker playing canned phrases to encourage pedestrians over.

It talks about you with other cars

If you’re paranoid, or self-conscious about your driving abilities, the F 015 might not help your anxiety. Mercedes is a big advocate of car-to-X, basically communications between other vehicles and the city infrastructure itself, and the autonomous concept embodies that just as much as it does doing away with tedious driving. 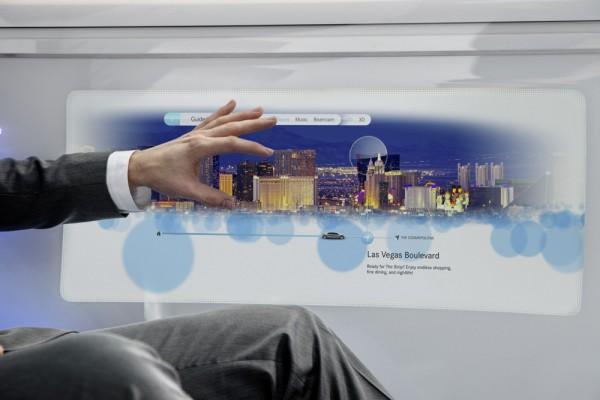 By feeding data about traffic conditions – think Waze but baked into the car itself – not to mention weather, road status, and other data, Mercedes believes a self-driving fleet could actually end up making driving better for everyone, manual or autonomous, because we’d have a better real-time understanding of urban environments.

It’s not just about autonomous driving

True, the F 015’s biggest party trick is its ability to drive itself, but that’s not the only thing it has going for it – and some of them may come to production cars far quicker than the robo-chauffeur. The clamshell doors – which Mercedes calls “saloon doors” – feature a brand new rear hinge design, for instance, which allows them to be opened regardless of whether the front doors are open or not. 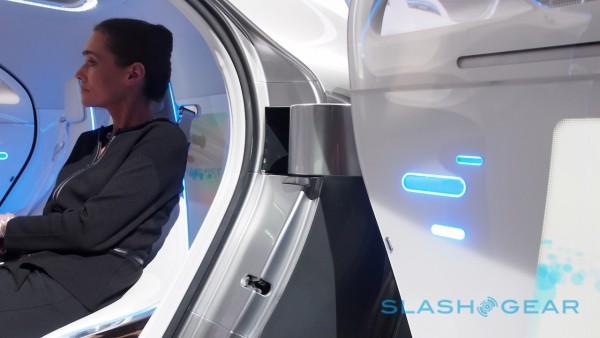 The magic is in a double hinge mechanism, which draws the doors back and then open. They’re likely to show up on future Mercedes SUVs and minivans, allowing for far easier loading of kids, pets, and shopping bags.

Meanwhile, the fuel-cell engine architecture and the high-tech touchscreen interface in the cabin – which moves controls so that they’re close to your fingers when you reach out – are also likely to help shape future production models. It may still be a while before your Mercedes-Benz drives itself, but that won’t be the last we see of the F 015’s talents.