It doesn’t seem like it now, but the words ‘Mazda’ and ‘rotary’ go hand-in-hand like roast beef and mashed potatoes. And in recent news, Mazda could give the upcoming MX-30 electric vehicle a rotary generator, harking the return of Mazda’s famed rotary powerplant. Although this time, the rotary engine will be smaller, lighter, and more compact, and it’ll function primarily as a range extender rather than a source of high-revving horsepower.

Mazda is celebrating its centennial anniversary this year, and it’s due to release several 100th Anniversary Special Edition models to commemorate the event, but none of it will have a rotary engine. On the other hand, Mazda’s first-ever all-electric MX-30 crossover is slated to arrive in Europe next year. The brilliant thing about it is it managed to remain quirky without polarizing the senses.

It doesn’t look like an EV, but it stands out from a conventional small crossover. All you need to see are those magnificent suicide doors on each side, which Mazda lovingly calls ‘freestyle doors’ or ‘center-opening double doors.’ This also means the MX-30 has no B-pillars like in a conventional car. In fact, it pretty much resembles the door arrangement in an RX-8 sports car – the last ever production Mazda equipped with a rotary gasoline engine. 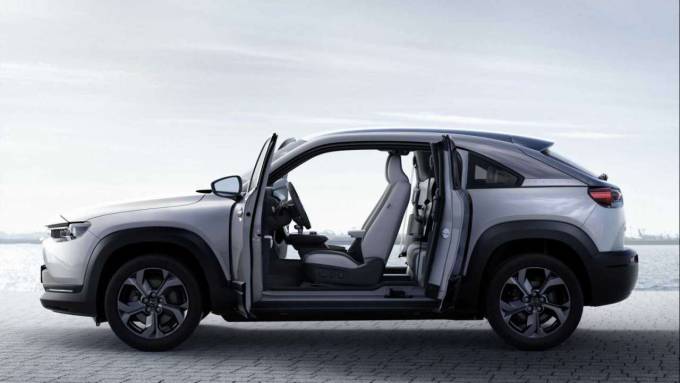 And based on Mazda’s recent press release, the rotary engine is making a comeback in the MX-30, which evidently makes it the first rotary-equipped electric car. But instead of having the screaming histrionics of the RX-8’s rotary engine, it will primarily function as a range extender when the batteries run dry. Apparently, the rotary might also provide some boost to the MX-30’s single electric motor, but we’re purely speculating at this point.

However, this brilliant set-up will finally lay to rest the MX-30’s biggest waterloo. Equipped with a dinky 35.5 kWh battery pack, the incoming Mazda MX-30 is only good for around 130 miles of range, which is a dismal figure compared to similar EVs like the Hyundai Kona Electric and Nissan Leaf. In fact, the Leaf has a 40 kWh battery pack in base trim, which is still more than what the MX-30 has to offer. 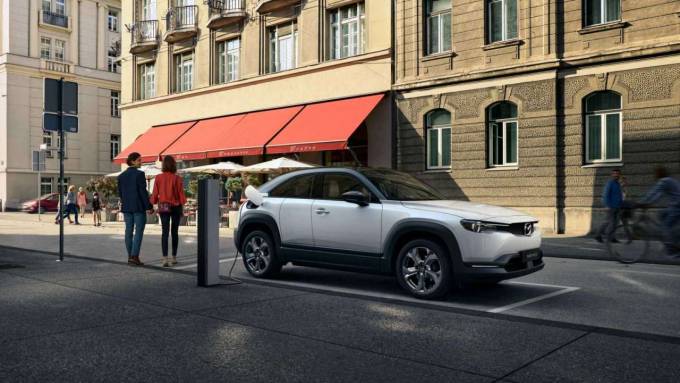 But the game changes with the addition of a rotary-powered on-board generator. This brings to mind the Mazda2 EV concept, a mini hatchback equipped with a 0.33-liter single-rotor rotary generator. It generated 38 horsepower and is fed by a small 2.3-gallon fuel tank. The Mazda2 EV concept also had a small 20 kWh battery pack for a total range of around 110-120 miles. But with the rotary range extender, it achieved a combined 236 miles of range.

We’re expecting a similar arrangement in the Mazda MX-30 EV. In its current form, the MX-30 has a single electric motor driving the front wheel. Producing an adequate 143 horsepower, the MX-30 also benefits from Mazda’s proprietary e-Skyactiv powertrain with G-vectoring to deliver the ‘zoom, zoom’ driving experience. 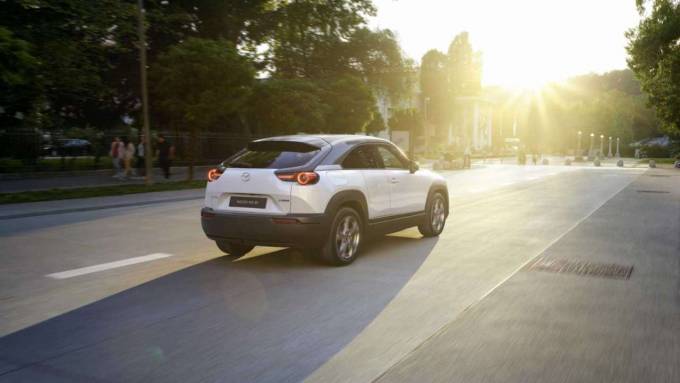 However, Mazda didn’t make it clear if the MX-30 is arriving in North America. But if there’s any hope, the official images revealed a left-hand drive MX-30 even though initial models are destined for European (right-hand drive) consumption.