If you thought Samsung was ever going to stop attempting to create smart devices with every single different screen size, Galaxy S to Note to Tab, you were wrong! Today some anonymous sources have let it be known that two new Samsung smartphone/phablet devices by the name Samsung Galaxy Mega will be coming forth some time this year. We’d had some previous insight into at least one of the display sizes due to an accessory release made public during the Samsung GALAXY S 4 reveal event, while the other comes as a bit of a surprise!

What the folks at SamMobile have been told by some sources they trust to the end of the world is that not one, but two Galaxy Mega smart devices will be revealed before Summer’s end. The first of these devices comes in at a lovely 5.8-inches while the second – once again bridging the gap between smartphones and tablets – will be bringing on a monstrous 6.3-inches of display real estate.

Think about how the Samsung release schedule has begun working with naming conventions, cutting off at certain size points. With the Samsung Galaxy S III and 4, we’ve begun to see Samsung ending the growth of the size of the display, with the next level then being the Galaxy Note – but there it ends. Though it would seem to make sense that Samsung would create a scale something like the following, it’s simply not in the cards: 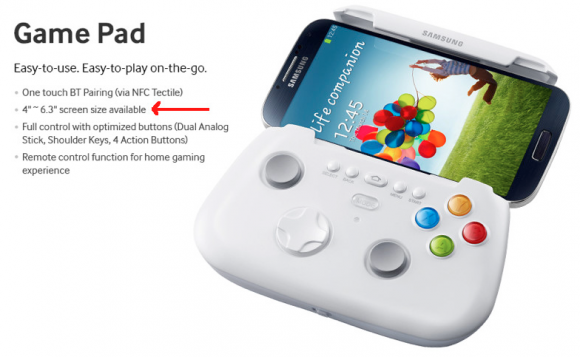