Maru OS tries to bring Continuum to Android with a twist

Microsoft‘s Continuum has most likely sparked the imagination of many a developer. To be fair, it’s not alone or even original. Ubuntu showed off its Convergence idea long before Windows 10 even hit the scene, a dream that has started to become reality with the bq M10 tablet. Now a hitherto unknown group of developers have revealed what they call Maru OS, which brings a touch of Convergence/Continuum to Android. The difference is that you actually have two operating systems on the same device.

With both Microsoft’s Continuum for Phones and Ubuntu’s Convergence, a device, usually a smartphone, runs only one OS, Windows 10 or Ubuntu Touch, respectively. The form of these platforms depend on where content is displayed. On a smarpthone, it takes the form of, well, a smartphone. When connected to a larger external display, the user interface expands to a desktop-like presentation. Whether or not you have access to regular desktop apps depends on the implementation.

Maru’s switching between phone and desktop interface does depend on the display as well. Where it differs, however, is that it isn’t a simple UI switch but a full OS switch. On its own, it runs Android, based on 5.1 Lollipop that Maru OS developers advertise to be ship with zero bloatware, which is true to some extent. It does come with Google Play Store, so installing apps won’t be a problem.

When you connect the phone to an external HDMI display, a different OS kicks in, one based on Debian GNU/Linux. It isn’t immediately evident which implementation Maru has opted to use, but one that quickly comes to mind is a chroot-based method some Linux power users will most likely be familiar with. Here, Maru presents a full and real desktop experience that will be familiar with those who use the GNOME desktop environment. Unlike Continuum, you won’t be limited to apps designed specifically for “universal” use. What you can use on a Linux desktop is available to you, provided Debian has the software packages for them (hint: they almost always do). From word processing to even hardcore tasks like programming or running a web server, all those are supported. Your only limit is the phone’s hardware. 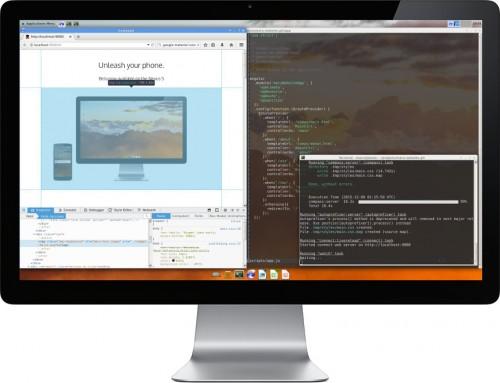 For the time being, that means a Nexus 5, a smartphone that runs on a Snapdragon 800 and has only 2 GB of RAM, which might not be enough for some of the heavier tasks. Installing Maru on it is also something regular Android users wouldn’t want to do, because it is practically the same as installing a custom ROM, which means flashing and wiping the device. And finally, Maru’s desktop switch only works with a wired HDMI connection, so no cheating with a Chromecast. The OS is still in beta, so those limitations might disappear later on.