Put the promo shots of the new Toshiba Libretto W100 next to the leaked renders of Microsoft’s Courier project and you’d be forgiven for assuming one is the production version of the other.  When I talked to Toshiba late last week at a preview for the new Libretto, however, they were keen to distance their new gadget from what was described by one team member as “only ever a design study”.  Of course, two screens and a finger-friendly interface mean the product and the project will inevitably be compared, so just how well does the Libretto W100 live up to the Courier promise, and – more importantly perhaps – where does it most significantly fall short?

A couple of months ago, in the aftermath of Microsoft announcing they had no plans to commercially produce a Courier device themselves, I mentioned Toshiba’s tipped double-display tablet as the potential hardware chassis around which a new, focused build of Windows 7 might make its debut.  As it turns out, Toshiba has done the software work itself – with its so-called LifeSuite of virtual bulletin board apps and touch-centric file browser – and the heart of the device, rumored to be NVIDIA’s Tegra 2, is in fact a more mundane Pentium CULV chip.  The side-effect is dramatically shorter battery life than what we might expect from a Tegra-based machine, just 3.5hrs at most, and no 1080p HD capabilities either.

More fundamental, however, is Toshiba’s positioning of the Libretto W100.  At the press briefing, company execs proudly boasted that the ultraportable “can be used as a primary PC device”, though conceded that for large-scale text entry users might want to hook up a Bluetooth or USB keyboard rather than peck away at the W100’s on-screen ‘board.  That’s worlds apart from how Microsoft’s concept positioned Courier, which was meant to be a task-specific companion device, your digital scrapbook making clipping internet and multimedia – then sharing that with an online community – straightforward. 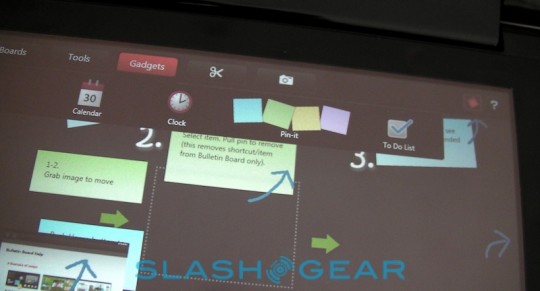 Should we argue when Toshiba are trying to deliver more rather than less?  I think yes, when you take into account the inevitable side-effects of the W100 biting off so much.  Price is the biggest hurdle which the company – and their early-adopters – must overcome: official figures haven’t been announced, but I was told somewhere between £800 and £1,000 was likely ($1,180 to $1,480) which puts it on a par, price-wise at least, with a new MacBook Pro.  Tablets and ultramobile devices have never been cheap options, of course, but then neither have they ever shifted out of the periphery and into the mainstream.

At that sort of range, Toshiba may well find themselves compared with the cheaper iPad and more traditional, more powerful but similarly priced ultraportable notebooks, and I can’t imagine the W100 coming out on top in all but the most unusual cases.  Strong sales of the iPad have certainly indicated that there’s a hunger for touchscreen experiences in consumer electronics, while netbooks have shown that super-compact “full” PCs can find a space in the bottom end of the market, but neither command the sort of price the Toshiba expects.

Ironically, launched simultaneously alongside the Libretto W100 was just the sort of long-life, task-focused device I was hoping we’d see from Toshiba.  The AC100 – which they’re calling a MID but we’d better recognise as a smartbook – is based on the NVIDIA Tegra 2 chipset, promises 1-second resume-from-standby times and up to 8hrs of use with wireless switched on (or up to a week on standby). 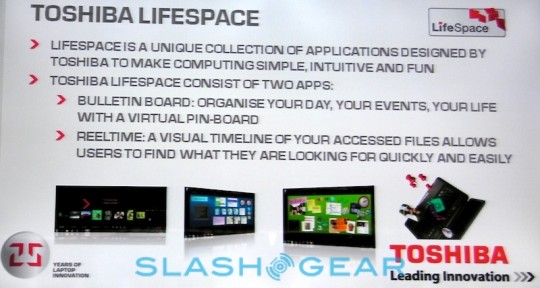 The reassuring thing is that, talking to Toshiba’s team, they’re not unaware of what people want and – though it’s couched in suitably on-message language – the limitations of the Libretto W100 in its current form.  They’re describing the compact clamshell as a test of the water, a niche product that will hopefully get them a fair chunk of feedback both from those sniping from the sidelines and those (few) who actually buy the W100 itself.  Still up for consideration, they say, are alternative platforms – like, indeed, the Android OS on the AC100 – and specifications that would allow them to pull down the price tag to levels more like the iPad.

That’s the crux of it.  Yes, an external camera would be neat, and 3G probably should be fitted as standard; yes, Toshiba’s W100 custom apps are finger-friendly but the rest of Windows 7 falls short.  Active digitizer support would be handy, too: a capacitive touchscreen is fine for pecking at, but if you’re making a digital book then the sort of accurate handwriting a Wacom digitizer is capable of (with its special stylus) is ideal.  There are, of course, dual-mode screens which pair both technologies, and Microsoft have some pretty serviceable handwriting support in Windows 7 and, specifically, their OneNote digital journaling app.

In the end, though, the Libretto W100 has probably been priced out of the market, and that’s a huge shame.  If Toshiba can stay the course, see past what I reckon will be modest sales figures for this first-attempt, and – most importantly – focus in on what made Courier so enticing in the first place, generation-two could be a winner.

Looking for more on the Toshiba Libretto W100?  Check out our hands-on article.