When LG revealed that it was indeed preparing a payment system to take on Samsung and Apple, it was said that it would be different. And by different, it apparently meant it would be different from wireless, mobile payment systems and, conversely, similar to physical payment cards. At least to some extent. Leaked photos from a Korean news site revealed what is supposed to be the LG Pay “White Card”, a credit card like plastic that can actually contain multiple cards and then be used normally like any other card.

If Samsung Pay, with its dual NFC and Mag Strip systems, was a middle ground between wireless and traditional payment systems, LG’s White Card is sort of a middle ground between Samsung Pay and credit cards. The idea of a single plastic card carrying all your credit cards inside it isn’t exactly new. Last year, Stratos, which is shutting down soon, almost had a working implementation. There are still a lot of missing information about LG’s version, but the basic concept and purpose is the same.

The card itself, however, would be unlike most credit cards. There is, for example, a small low-power LCD display, not that different from a digital clock, that displays the status. There are two buttons at the bottom that will let users switch between the credit cards stored inside. And there are gold pins that are supposedly used for charging the card and maybe as a credit card chip. 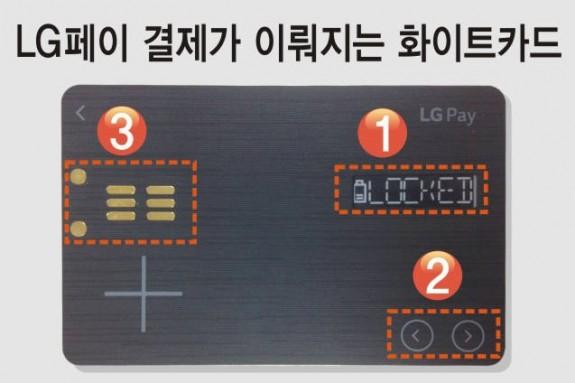 This is where the details get a bit murky. It isn’t clear if the card only supports chip-based terminals or if it also has a magnetic strip. In Stratos’ case, their card supposedly allows rewriting the information on its mag strips, depending on the card being used at the moment. Samsung, on the other hand, transmits that information wirelessly to mag strip terminals.

One interesting detail about the LG Pay White Card is that LG will supposedly allow card companies to directly manage transactions and information on the card, bypassing LG’s servers. This might be more tempting to finance companies who are wary of having to pass through a middle man like Samsung or Apple. LG Pay is scheduled to launch first in Korea but might make an appearance at MWC 2016 next month.