LG hasn’t been shy with the Optimus G Pro, its 5.5-inch 1080p quadcore behemoth, but now we know the oversized Android handset is headed to North America sometime in Q2 2013. Fronted by a 1920 x 1080 Full HD display that’s capable of 50-percent more brightness than rival phones, LG says, the Optimus G Pro also introduces some new software features, including a “Dual Recording” system whereby both the front and rear cameras shoot simultaneously, meaning that whoever is taking the photo also gets included in a 360-degree panorama.

There’s also tracking focus in the camera, something common on standalone shooters but more rare on smartphones, together with a dual-window multitasking system similar to what we’ve seen Samsung do on the Galaxy Note II. Buyers in South Korea will get full QShopping support, for online price comparisons and ordering while you’re browsing physical stores. 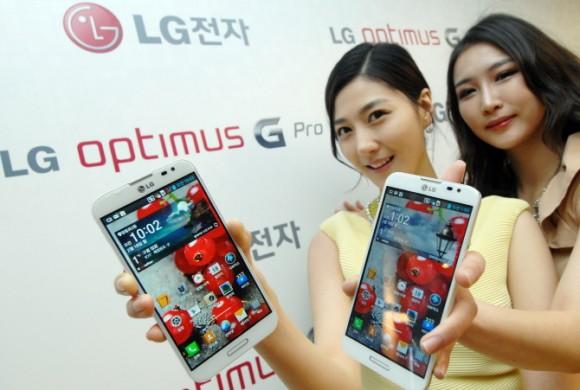 The 1.7GHz dualcore processor – Qualcomm’s 600 Series Snapdragon – is paired with 2GB of RAM, meanwhile, and runs Android 4.1 Jelly Bean with LG’s usual tweaks. The main camera runs to 13-megapixels, while the front is 2.1-megapixels, and the whole thing is powered by a sizable 3,140 mAh battery.

Those in Korea will be able to snap up the LG Optimus G Pro from Wednesday, February 20, across three carriers simultaneously. Those in North America, Japan, and elsewhere in the world will have to wait for a sequential launch sometime in the second quarter, though our guess would be that LG will have more to share at Mobile World Congress next week.