Two years after Levi’s and Google teamed up on their touch-sensitive Jacquard jacket, now there are two new versions of the gesture-responsive clothing that promise to be more affordable and more flexible. The Levi’s Trucker Jacket with Jacquard by Google brings the cost of entry down to under $200, slims down the gadgetry, and coaxes more functionality from your swipes and taps on the sleeve.

The original Levi’s Jacquard jacket was always part product, part proof-of-concept: a way for both the clothing company and Google to figure out just how the technology could coexist with fashion. It had a fairly narrow intended audience, too, of urban cyclists. 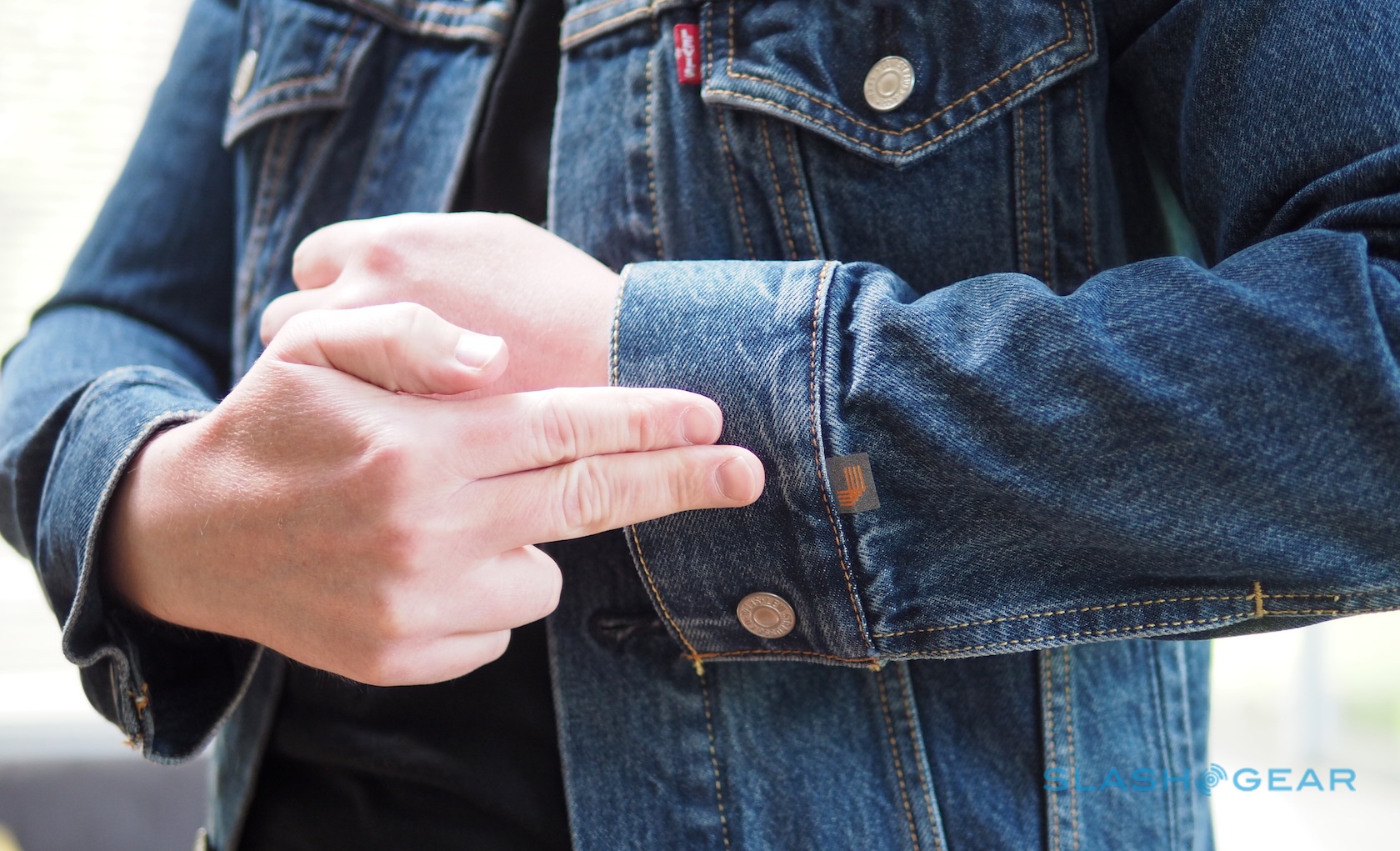 “We knew they weren’t paying attention to the laws that say you shouldn’t text or ride, or regulations that say your phones should stay in your pockets,” Paul Dillinger, VP of Global Product Innovation at Levi’s, explains. “We knew cyclists were doing some pretty dangerous behaviors.”

The result was the Levi’s Commuter Trucker Jacket with Jacquard, a $350 jacket designed for urban cyclists that allowed them to keep their phone in a pocket but still interact – via gestures swiped onto the sleeve and tracked with the special Jacquard fibers – without taking their eyes off the road. Turns out, though, it proved appealing to more than just that group. “Cyclist liked it,” Dillinger says, “but more people were interest than that.” 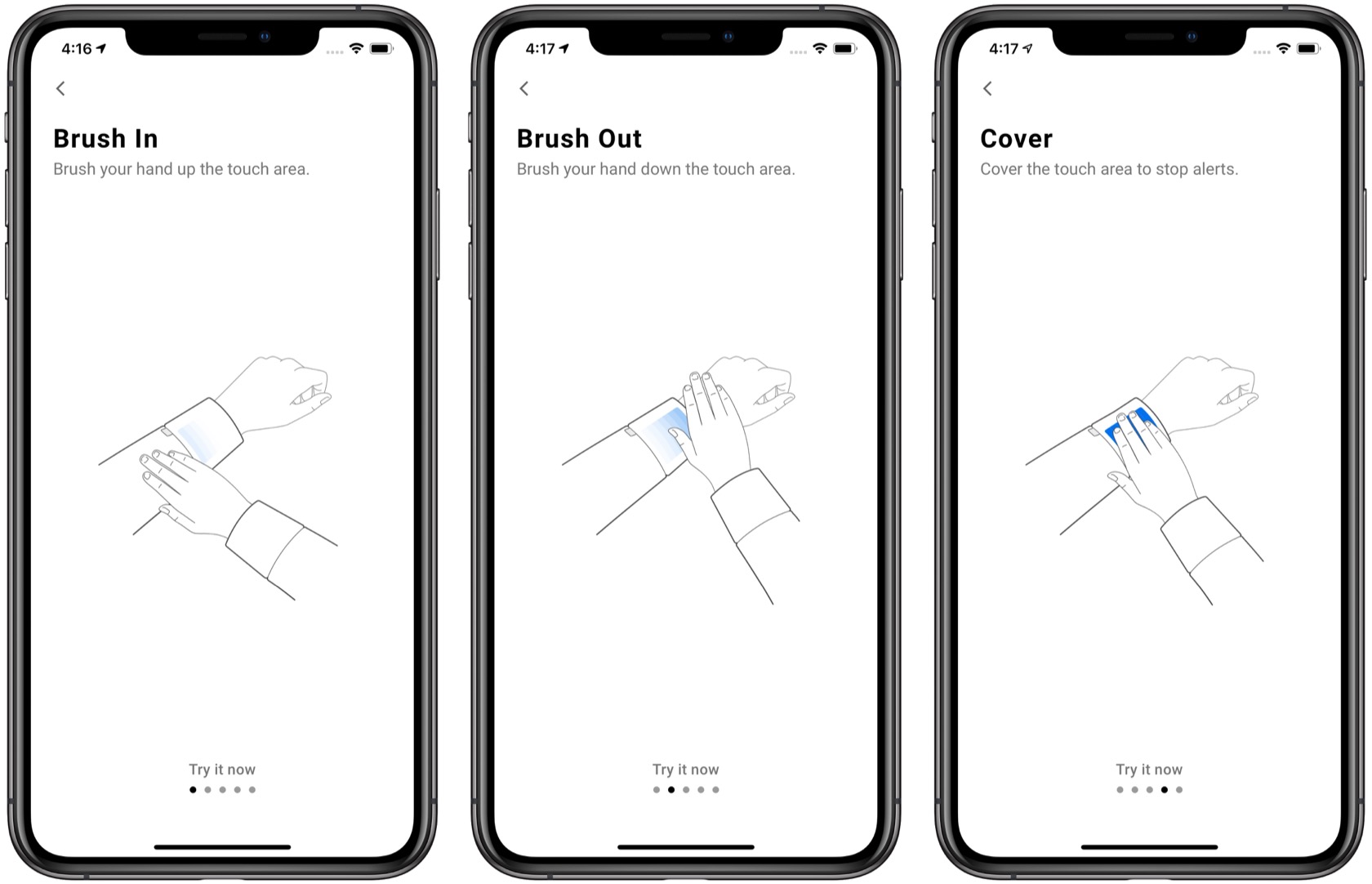 That broader audience had broader demands, however, wanting more functionality from the jacket. The fact that it was too warm to wear year-round was another criticism, as was the price. “We thought that we’d priced it quite low,” Dillinger explains, “many fashion editors gave the feedback that it was surprisingly inexpensive.” Tech editors, however, disagreed. 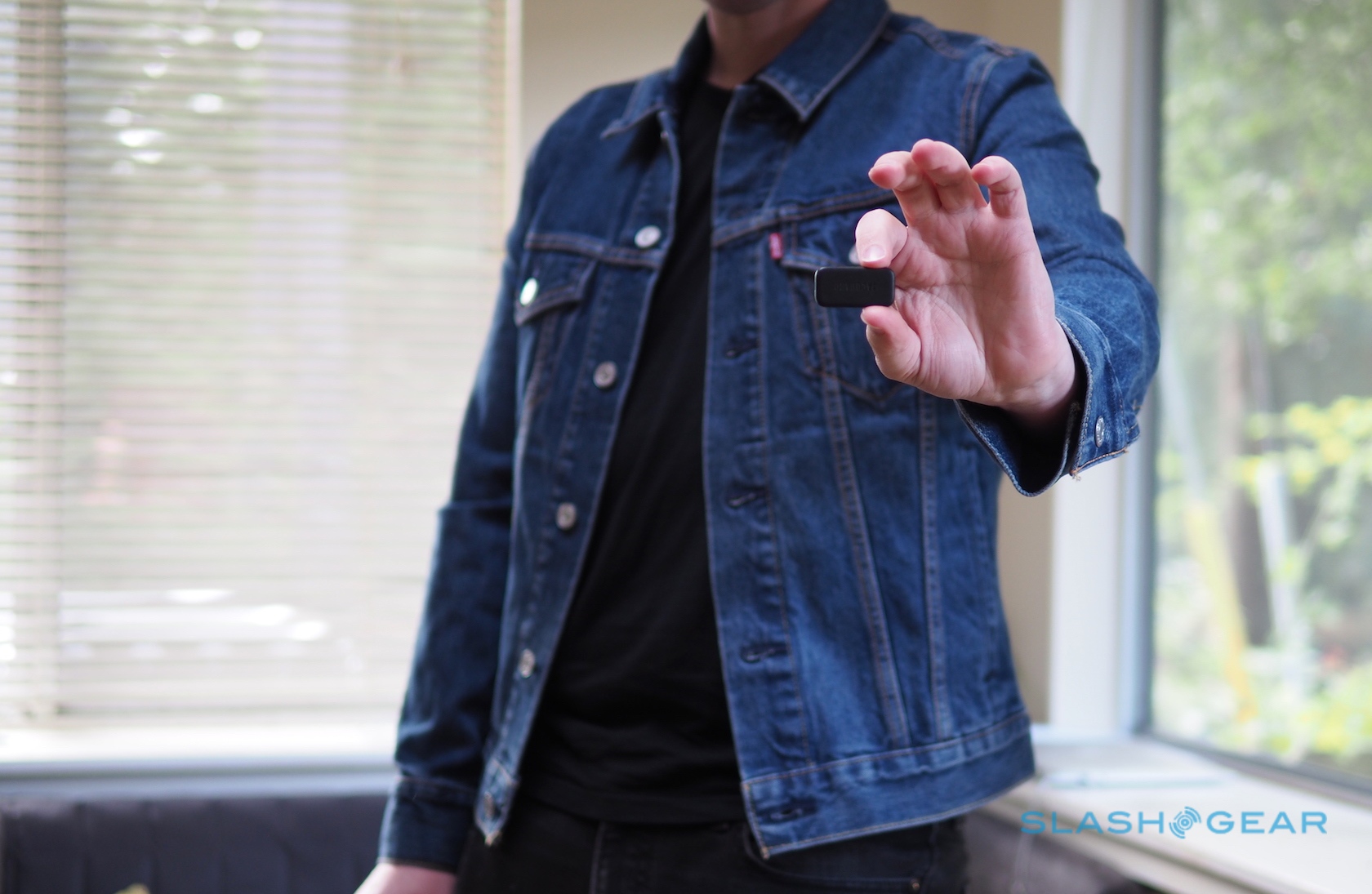 The Bluetooth tag is now smaller, a black lozenge of plastic akin to a small USB memory stick in size. It slots into a socket integrated in the seam of the – somewhat stiff – left cuff, where all the gesture-sensitive yarns are now interwoven. The Trucker Jacket is lighter and more generally wearable than the first-generation Commuter Trucker Jacket, while the Sherpa Jacket is a lined winter version. Both will come in men’s and women’s cuts.

“It’s just an authentic piece of denim outerwear,” Dillinger says, “that just happens to have this magic discreetly tagged into the cuff.” The new tag still has a color-changing LED and a vibration motor for notifications, and it charges via microUSB (not, sadly, USB-C). Removed, the jacket is machine-washable. 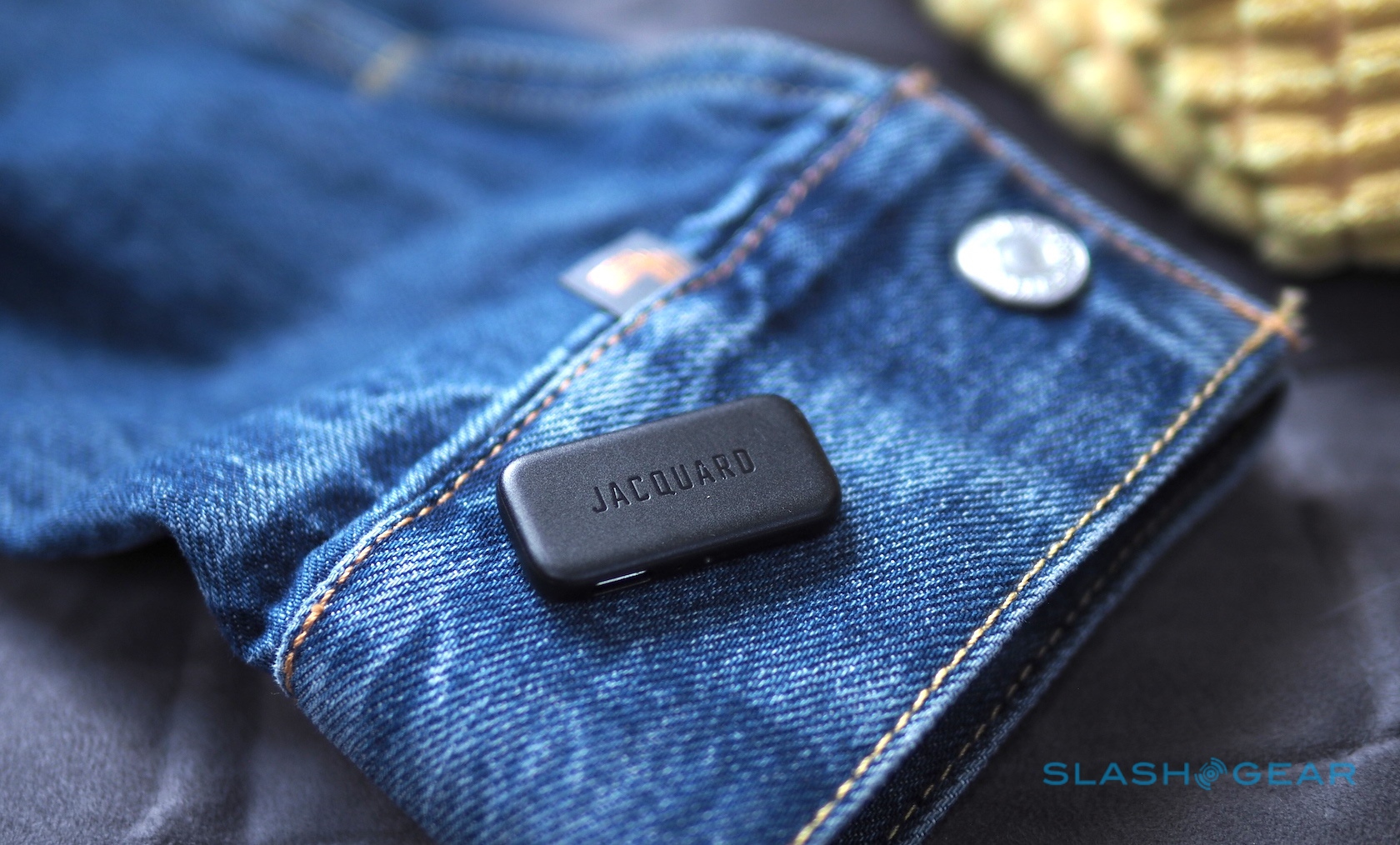 It pairs with an Android phone or an iPhone, and the range of things it can control has expanded, too. “It doesn’t do everything,” Dillinger argues, “it’s not trying to take all the functional value of a smartphone and shove it on your wrist.” Still, the use-cases cover the things you might typically want when you’re wearing an outdoor jacket.

So, you can control music playback, as well as answer and end calls taken through a wired or wireless headset. Another gesture works as a remote shutter release for the camera – complete with a visual and haptic countdown through the Jacquard tag – while it can also warn you if you’ve left your phone behind. For navigation, you can preset an address and get directions there with a gesture, or hear your ETA. 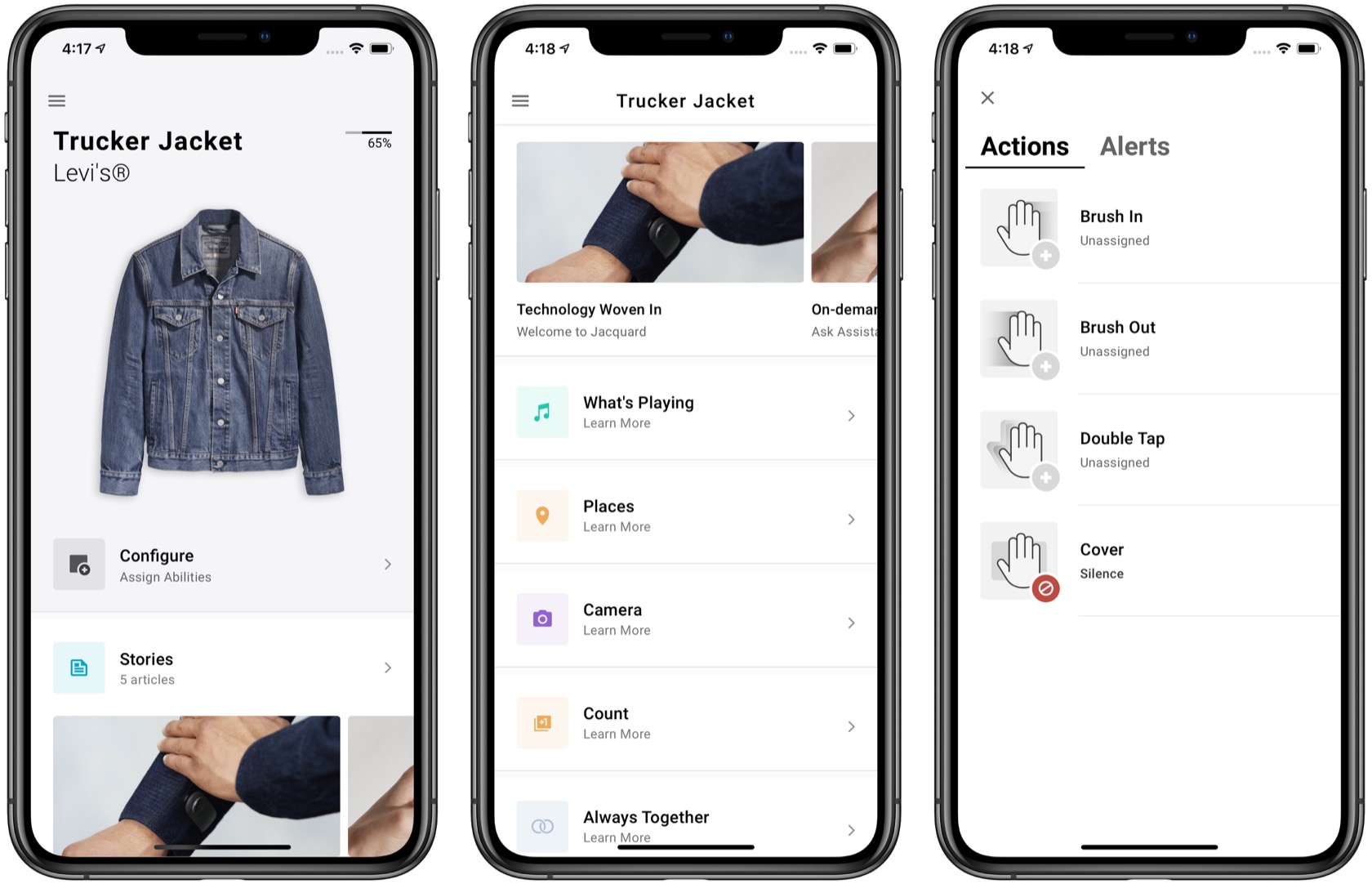 Perhaps the most interesting triggers are the “My Day” and Google Assistant integration. The former gives you a run-down of the day ahead, including a weather report, what the first thing is on your calendar, and how long it will take you to get there. The latter allows you to preconfigure a question for the Google Assistant, and activate that with a gesture.

That could be as general as “What’s today’s tech news?” or as specific as a particular stock price or the latest score of a favorite sports team. Or, since the Assistant can take control over your connected home, you could have a gesture that turns on the smart lights or that locks the doors.

As I found while I was wearing the Jacquard-enabled Trucker Jacket over the past few days, it’s a very different experience from, say, a smartwatch. There’s a natural expectation that a connected device will have an infinitely broad range of capabilities, especially one which integrates with something like the Google Assistant. Levi’s jacket, however, is far more focused. 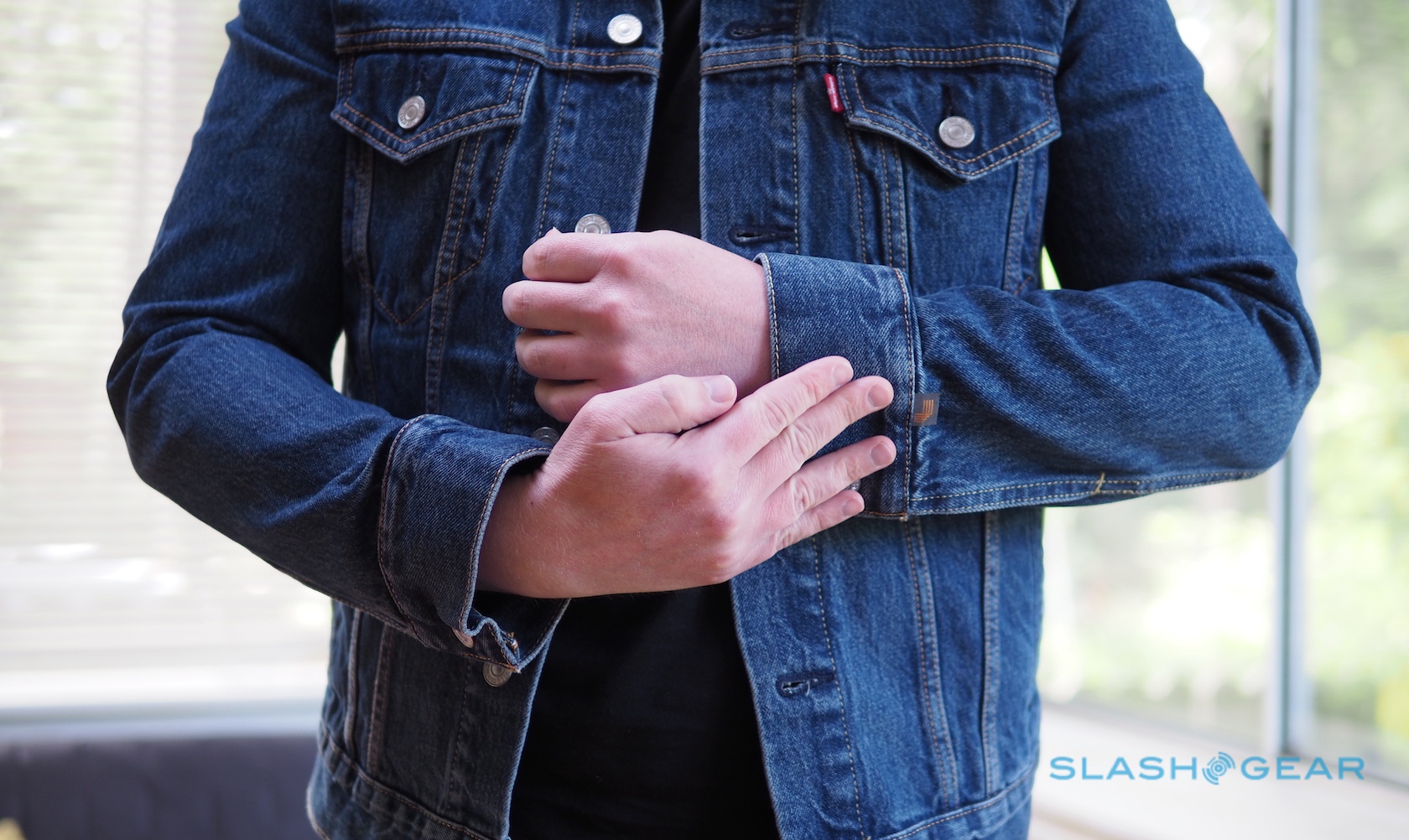 “It’s more of an exploratory work to understand how much AI people can tolerate, and how much AI can be helpful,” Ivan Poupyrev, Director of Engineering at Google ATAP, explains. “So I think we’re going to do incremental steps to understand that, and how useful that can be to the consumer. People perceive technology very different when it’s a band on your wrist versus when it’s integrated into something you wear, like a jacket.”

Having to preconfigure a question for the Google Assistant seems, initially, counter-intuitive. After all, what makes the AI so appealing is really the breadth of its capabilities. Trying to set the new Levi’s jacket up with my iPhone, at first it felt like being offered just one wish by the genie and not wanting to choose the “wrong” one.

You can, of course, reprogram the gesture as often as you want. Still, the idea is that the digital shortcuts will quickly become associated with good old-fashioned muscle memory. You can assign an action to a brush-in, a brush-out, and a double-tap; covering the Jacquard threads defaults to silencing any active alerts. Three colors for the tag’s LED – blue, green, and pink – can be assigned to alerts like calls or texts from a VIP or in general, when you move out of range of your phone, or when your Lyft or Uber is approaching. 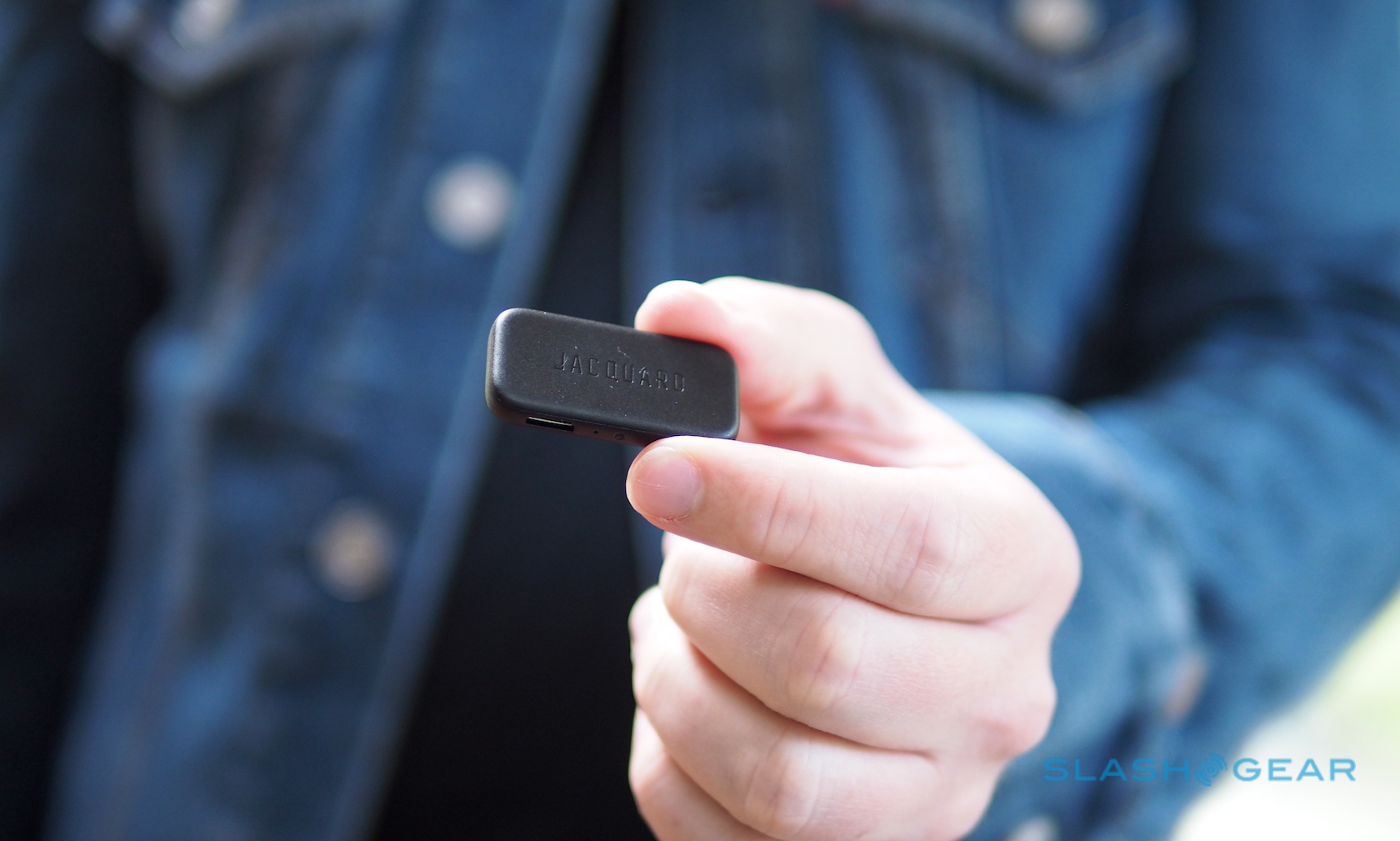 Context plays a role too, and expands how much you can do with the jacket and its limited palette of gestures. If there’s an incoming message, for example, you can brush-in to hear it read out. A brush-in while your rideshare is arriving, meanwhile, will read aloud the car’s make, model, color, and license plate.

“The goal here is to create a very fluid and connected experience where you don’t have to install another app, you don’t need to relearn how to use your hardware,” Google’s Poupyrev says. While clothing – including a recently-announced Yves San Laurent backpack – has been the first arena for that, “we also see this going into accessories and furniture,” Poupyrev confirms.

While Poupyrev’s team may be responsible for the invisible fibers, Google is leaving it up to brands to drive “new use cases” for the technology. What it didn’t intend – but what has happened anyway – is for Jacquard to be so popular with DIY makers. “The first product was built for Levi’s and wasn’t really designed to be expandable,” the Director of Engineering admits, yet people hacked the first-gen jacket anyway. 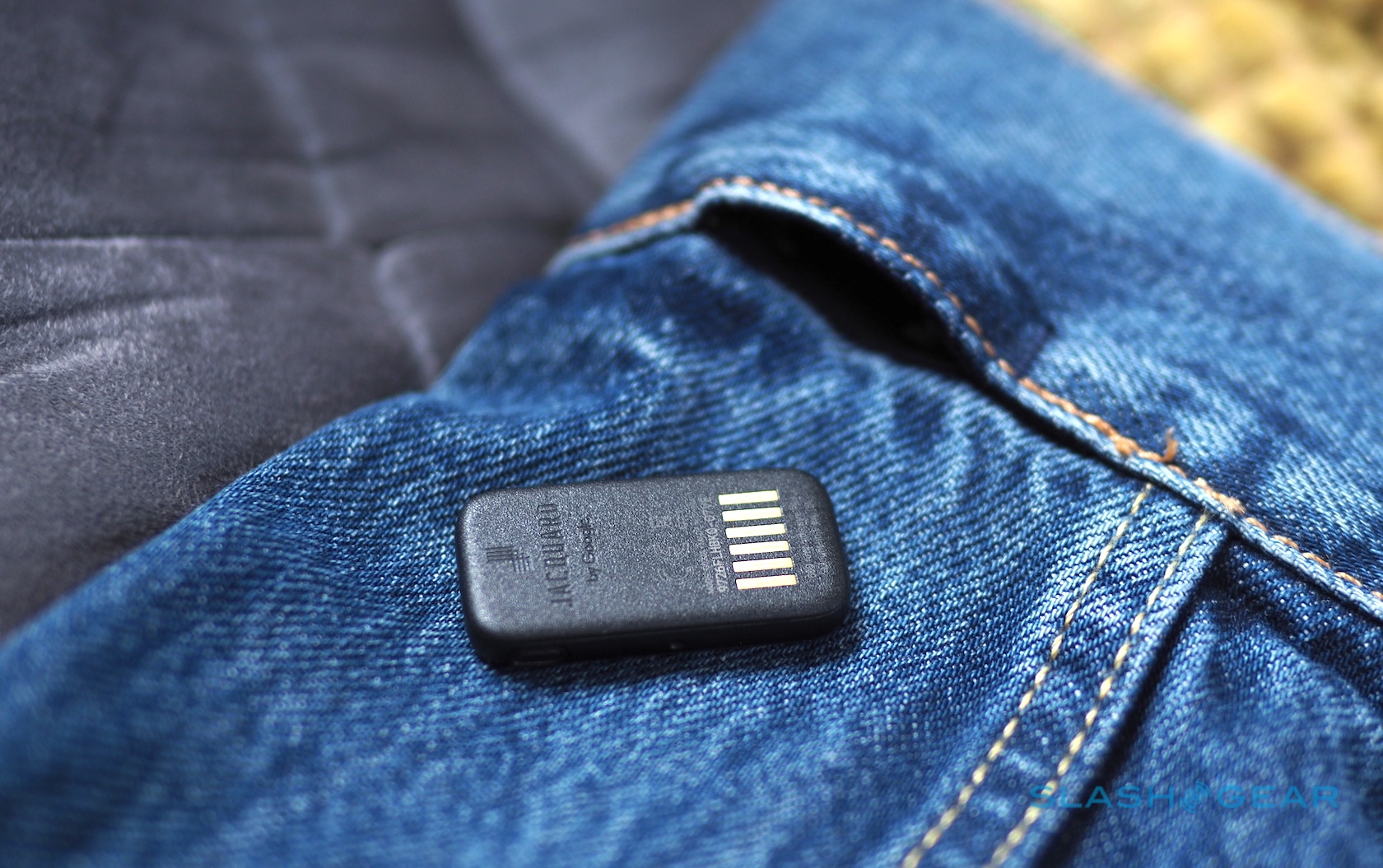 So, there’s now work underway to create some sort of developer kit to capitalize on that interest. “We see this need and this excitement for people to do their own stuff,” Poupyrev confirms, “so we’re absolutely thinking about how we can package that.”

Standardized components will help there, though initially it’ll likely be companies rather than individuals that Google will welcome into the Jacquard fold. Software updates, meanwhile, will bring new functionality to both first- and second-generation versions of the jackets, Levi’s says.

I admit, with a smartphone pretty much permanently in my pocket, an Apple Watch on my wrist, and Bluetooth headphones often in my ears, I was skeptical that Jacquard would bring much extra to the table. The reality, however, surprised me. Just as a smartwatch has helped me pare back my screen time by allowing me to only retrieve my phone to interact with only the most essential notifications, so Levi’s new jacket kept the allure of the touchscreen at an even greater remove. 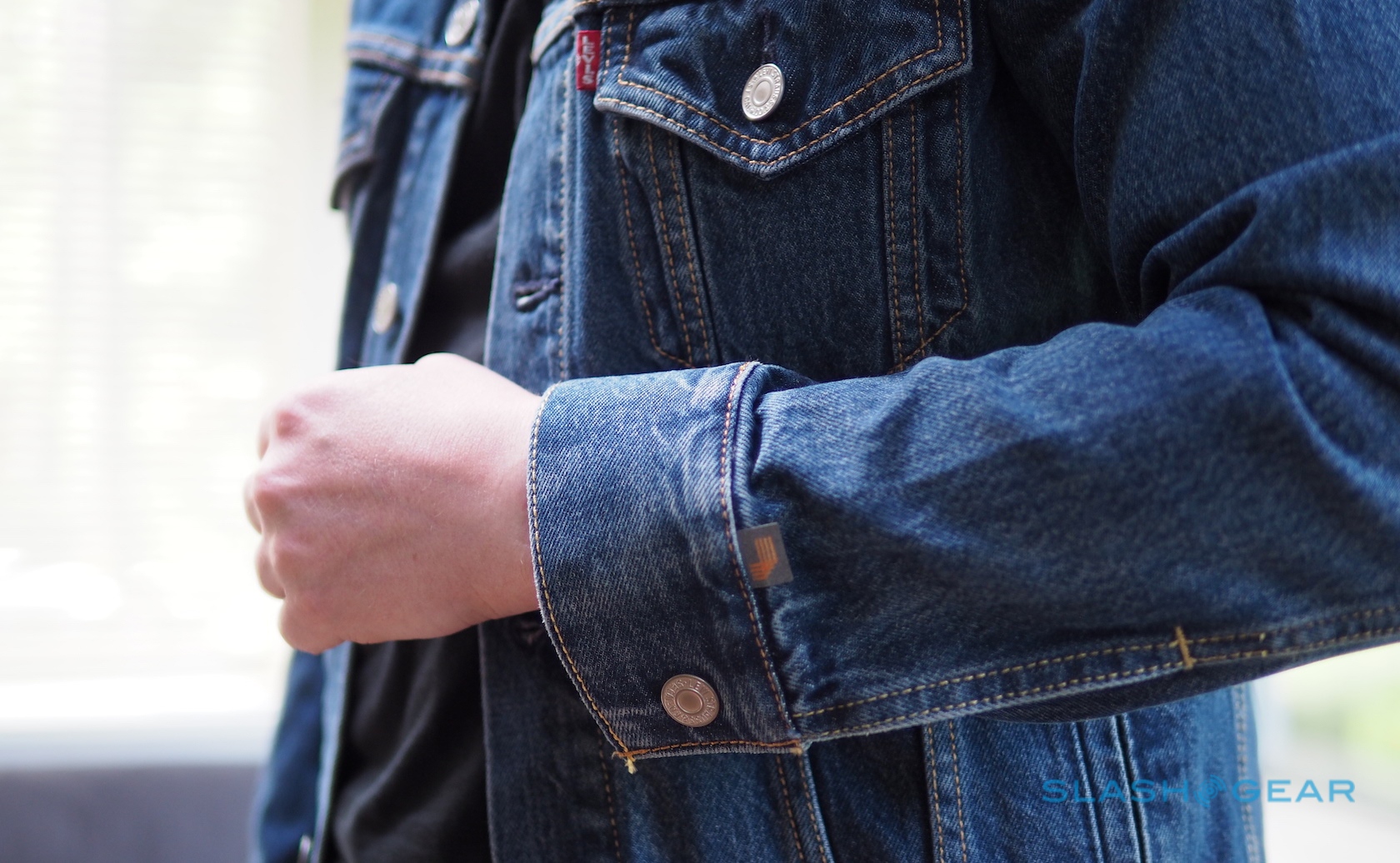 Like a lot of people, I struggle not to use my phone when it’s in my hand. Maybe I started out by responding to an urgent message, or checking a voicemail, but that all too readily progresses to scanning through my notifications, or checking my email, or even bigger time- and attention-sinks like Twitter or Instagram. No, Jacquard didn’t stop that from happening every time, but its version of focus through functional limitations did help cut down on digital distractions.

We’re still a long way from ATAP’s vision of Jacquard interwoven with all areas of our life. Still, I’m more enthused by that idea than I was when the first Levi’s Commuter Trucker Jacket went on sale. More than once I picked up the new Trucker Jacket to wear out, rather than another jacket, simply because it would mean I could use the gesture tech too. I really like the idea of being able to quickly switch the Jacquard tag between whatever it is I’m wearing or carrying.

That will of course depend on whether other manufacturers opt into Google’s vision. For now, Jacquard will be a little more attainable when the Levi’s Trucker Jacket and Sherpa Jacket go on sale in the US, UK, Australia, France, Germany, Italy, and Japan. 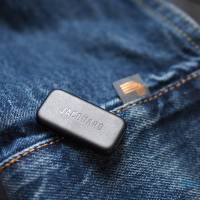 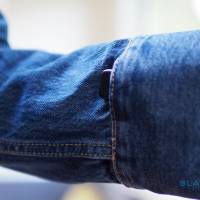 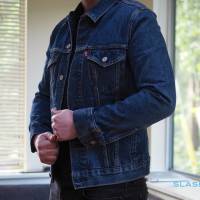 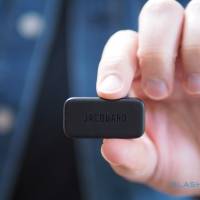 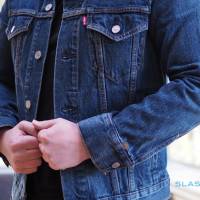