This week we’ve gotten both our first introduction to the newest in Lenovo’s Windows 8 wares and a first hands-on experience with gems such as the ThinkPad Helix. This machine is one of the new breed of transformable tablet PCs running full Windows 8 with a touchscreen monitor and full keyboard, but it’s got a bonus: you can flip it around backward and plug it back in the other way around.

What we’ve seen on this strange beast is a surprisingly thin machine overall (believe it or not) combined with a full notebook ride. While we’ve not had an extended time to see the way it’ll be working in the wild – in our laps, of course – but here at CES 2013 it seems like a rather realistically styled offering. The “Rip and Flip” experience isn’t half bad, either. 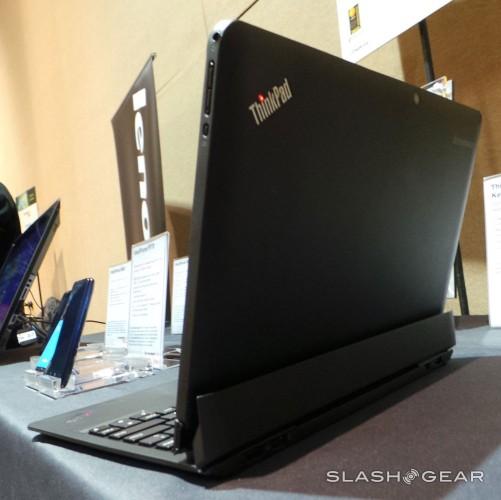 What you do is push down the button on the lower left of the display, pull it out, use it as a tablet, and replace it backwards in its keyboard dock home. With this ability you’re able to treat the machine as not just a notebook and a tablet, but as a stand-up touch PC as well. This is the newest of several ways you can work with a touch-capable Lenovo machine these days, folks, what will they bring on next?

Have a peek at the full Lenovo ThinkPad Helix details as they appeared earlier today here on SlashGear and let us know what you think – and get pumped for the full release later this year, too! Also hit up our full CES portal for more hands-on and up to the second updates all week long!