This afternoon a device has leaked from the halls of Acer with an 8-inch display and a keyboard dock attached along its longest side. This device is an 8-inch display-toting tablet that’s being reported to be carrying Windows 8 Pro 32-bit and an Intel Atom Z2760 processor under its hood. This tablet appears by all means to be detachable from its keyboard base and may be revealed along with the Star Trek-promoted transformable notebook we saw this morning at the start of next month.

This device has appeared in several photos, some as a tablet, some as a one-piece machine with a tablet bit being detachable. What’s able to be seen here is the machine’s ability to take on more than one form. As we’ve seen from Acer in the recent past, the ability to work as a notebook or a tablet is not something the designers at this manufacturer are afraid of.

UPDATE: MiniMachines appears to have had a takedown notice issued – take a peek while you still can! 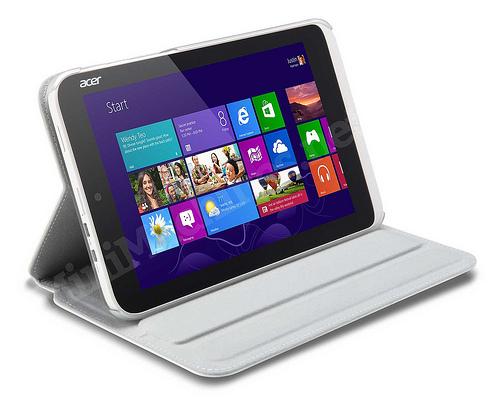 Perhaps the most intriguing image is the one you see below. Here you’ve got the 8-inch tablet set against the back – or is that the bottom – of a notebook. This notebook appears to take on a form that’s just a bit different from the docked version you see above. Is there more than a couple of forms of machine here?

If you compare this device with what we saw this morning in the Star Trek Into Darkness teaser, you see that it’s not necessarily impossible for this device and that device to be completely separate releases. Here in this tablet amalgamation you’ve got what very well could be in one case a keyboard dock attached to a large display (like a standard notebook) and in the other case a dock for this smaller tablet.

Could this be a device that takes the idea of a multi-display machine like the ASUS Padfone and makes it happen with a notebook/mini-tablet combo rather than with a detachable full-size tablet or phone? Stay tuned as we get the full story on May 3rd (if not before!) Stick with us here on SlashGear through our big Acer tag portal as we keep on digging!