Amazon‘s new Kindle Fire HD tablet has only been available commercially for the better part of a week, and new reports are already coming out showing just how stiff their competition will be against Google’s Nexus 7. The popular ad tracking and analysis firm Chitika just released some new data showing the Fire’s already taking 11% of all Kindle Fire web share, but that the Nexus 7 is much higher.

They state that ad impressions for the new Kindle Fire HD is already taking over 11% of all Kindle devices, meaning the adoption rate and sales are obviously doing quite well compared to the other Kindles. Considering the original has been available for more than a year shows the HD has some serious room to grow, and dominate. 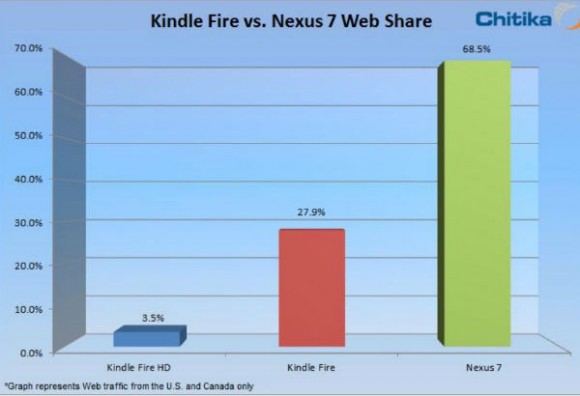 However, according to TheNextWeb Chitika then compares the Kindle Fire HD (or the original for that matter) to ASUS and Google’s popular Nexus 7 and the hill is looking pretty steep. With Chitika calculating the Android Jelly Bean powered tablet accounts for a 68.5% of the web share when compared to the Kindle Fire and the new Kindle Fire HD. That’s a different story indeed!

Obviously there’s a few things to consider here though. For one the Nexus 7 has been available for the better part of the summer and a few months now, while the Fire HD just launched a few weeks ago. Another thing could be the simple fact that more Kindle users are reading books and watching Amazon Prime content, while Nexus 7 users are browsing the web — so that could slightly skew the numbers. Either way both tablets appear to be doing quite well but only time will tell how the HD does overall. Be sure to take a peek at our Kindle Fire HD review, as well as our Nexus 7 review.