Killzone: Shadow Fall was arguably the most impressive of the PlayStation 4 unveil demos earlier this year, and now developers Guerrilla Games have more of the succulent first-person gameplay to tease us with ahead of the next-gen console’s launch. The studio walked E3 2013 attendees through a 21-minute walkthrough – which you can see after the cut – to detail what the PS4 delivers in terms of visual enhancements over the PS3 and more.

The new walkthrough follows a roughly five minute tech demo Guerrilla Games released last month, along with a huge dossier explaining what had been done to cook up the original PS4 demo. Side by side with Killzone 3, the enhancements in figure resolution were clear, for instance. 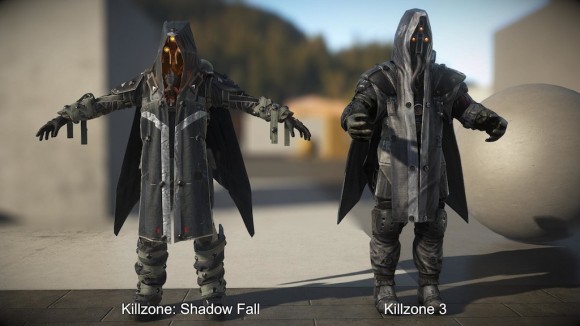 However, it’s how the PlayStation 4 enables the extra detail that will likely get gamers excited in general. Guerrilla had already talked about how the console’s GPU marked a considerable step up from the previous-gen, with similar programming methods to the PS3 that now offload more processing onto the graphics cores from the CPU.

In fact, some of the graphics the developer showed at E3 earlier this month looked more like art renders than they did in-game play, though Guerrilla insists they’re legitimate characters.

Squeezing extra visual gloss out of scenes has been a key element for both Sony and Microsoft with each company’s new console, though they’ve gone about it in different ways. With the Xbox One, for instance, Microsoft offers game developers cloud rendering for less time-dependent graphics.

In fact, Microsoft claims that each Xbox One will get the equivalent of roughly three comparable consoles in its new Xbox LIVE cloud, which can be used to crunch light effects, more detailed backgrounds, and other elements. Sony hasn’t turned to the cloud in such a way, though the Killzone: Shadow Fall examples we’ve seen so far suggest PS4 games won’t necessarily be left missing out.