Jaws dropped during Sony’s demonstration of Killzone Shadow Fall for the PlayStation 4 back in February, and now new information from developers Guerrilla Games gives some technical insight on how the next-gen console runs, what coding for it is like, and just what sort of step up from the PS3 is on offer. The tech demo – which you can see after the cut – shows how the new Killzone title was running on Sony’s demo hardware, while a “postmortem” of the event by Guerrilla Games runs down the improvements of the incoming hardware.

Much of the summary is dedicated to how much more straightforward it is to develop titles for the PS4. The console uses the same concurrency model as the PS3, for instance, with a main “orchestrator” thread and then the rest of the code running in jobs across all the cores; on the PS4, though, Guerrilla found that 80-percent of all code could now be run in jobs, versus 20-percent on the current-gen console. 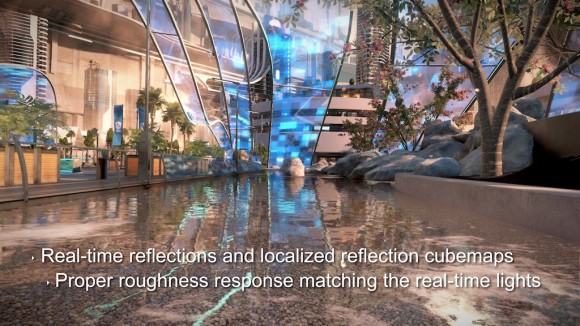 To show how well the game ran, the developers had to cook up their own CPU and GPU profilers, since the official tools still aren’t quite ready. On-screen, there’s a physically-correct lighting model and volumetrics supported on every light, along with real-time reflections. Some of the most obvious improvements are in characters, with far greater detail allowed.

“Our aim for [the] announcement event was to run on PS4 hardware” Guerrilla writes, meaning “1080p, solid 30FPS, [and] no cheats.” The latter is presumably a reference to the Killzone 2 for PS3 demo gaffe, where what was later revealed to be rendered game footage was initially portrayed as running on the console itself.

“PS4 is really easy to program for!” lead tech Michal Valient concludes, and the “GPU is really fast” while “GDDR5 bandwith is awesome” assuming you handle the memory mapping properly. “We’ve only scratched the surface” he says.

Sony didn’t show off the final hardware at its PS4 launch event, only the peripherals and some game demos. It did, however, confirm the core specifications: 8GB of GDDR5 RAM, an x86 CPU, an enhanced PC GPU, and a hard-drive; there’s also WiFi b/g/n and Bluetooth, USB 3.0, gigabit ethernet, and a Blu-ray drive.