The iPad is a computer, at least up until you start to want treating it like one and plug in accessories and peripherals. Then, Apple’s tablet starts to feel a lot like, well, a tablet. At $380, Kensington’s StudioDock aims to make bridging the two worlds – and going all-iPad on your desktop – easier, a docking station with the ports familiar from an iMac, but a form-factor designed with mobile devices in mind.

Kensington offers two versions of the StudioDock, depending on which iPad you have. One works with the iPad Pro 11-inch (2018 on) and latest iPad Air (2020) and is priced at $379.99, while the other is scaled for the larger iPad Pro 12.9-inch (2018 on) and is $399.99. Either way you get a sturdy metal stand in an Apple-esque brushed silver finish, with a plastic docking cradle that twists 90-degrees to cater for both screen orientations. 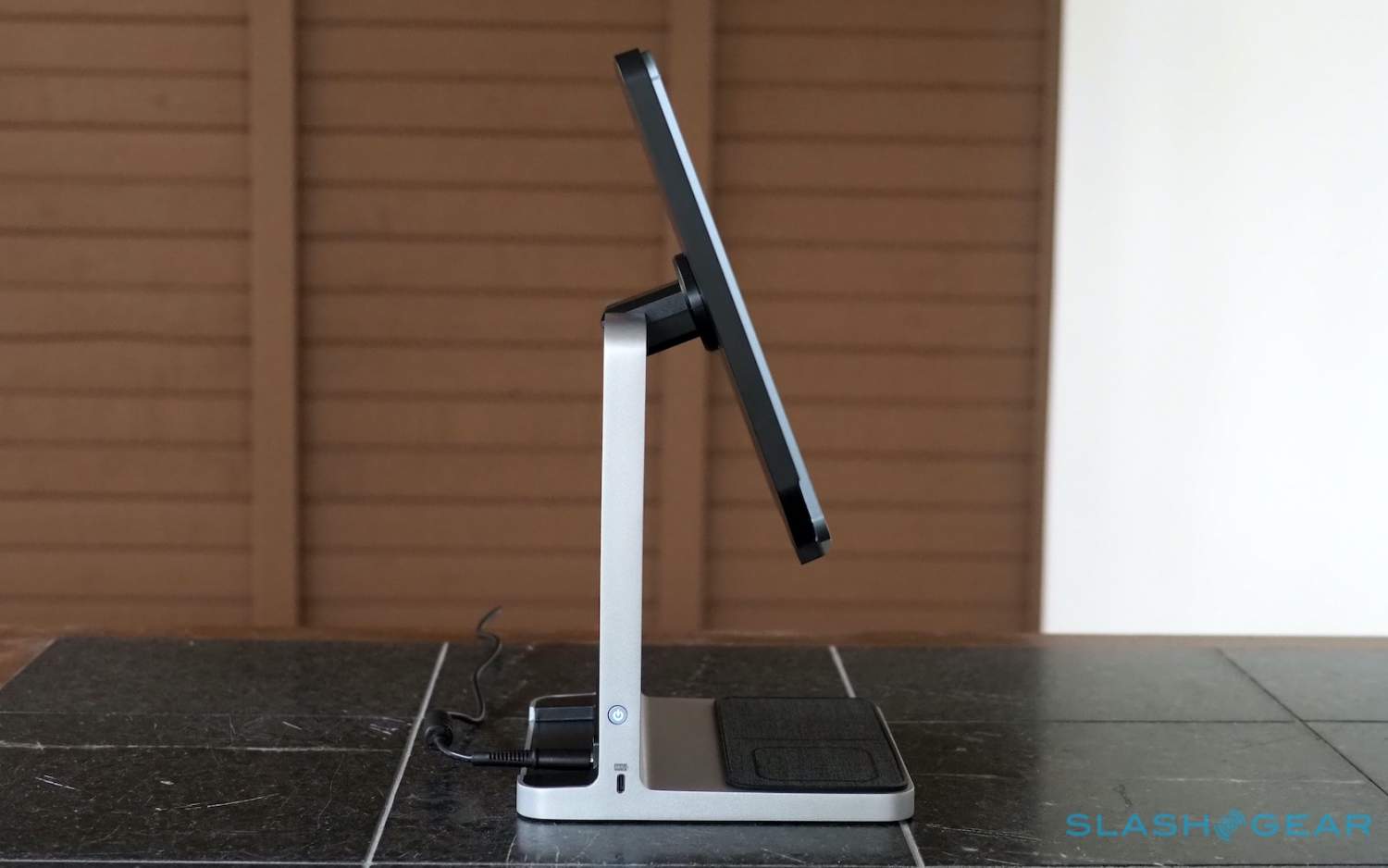 Since suspending hundreds or even thousands of dollars of iPad above your desk could be precarious, I was curious about the StudioDock’s docking mechanism. After all, you want something which is simultaneously so tight in its grip as to be reassuring, but also to release the tablet when you want to go mobile. 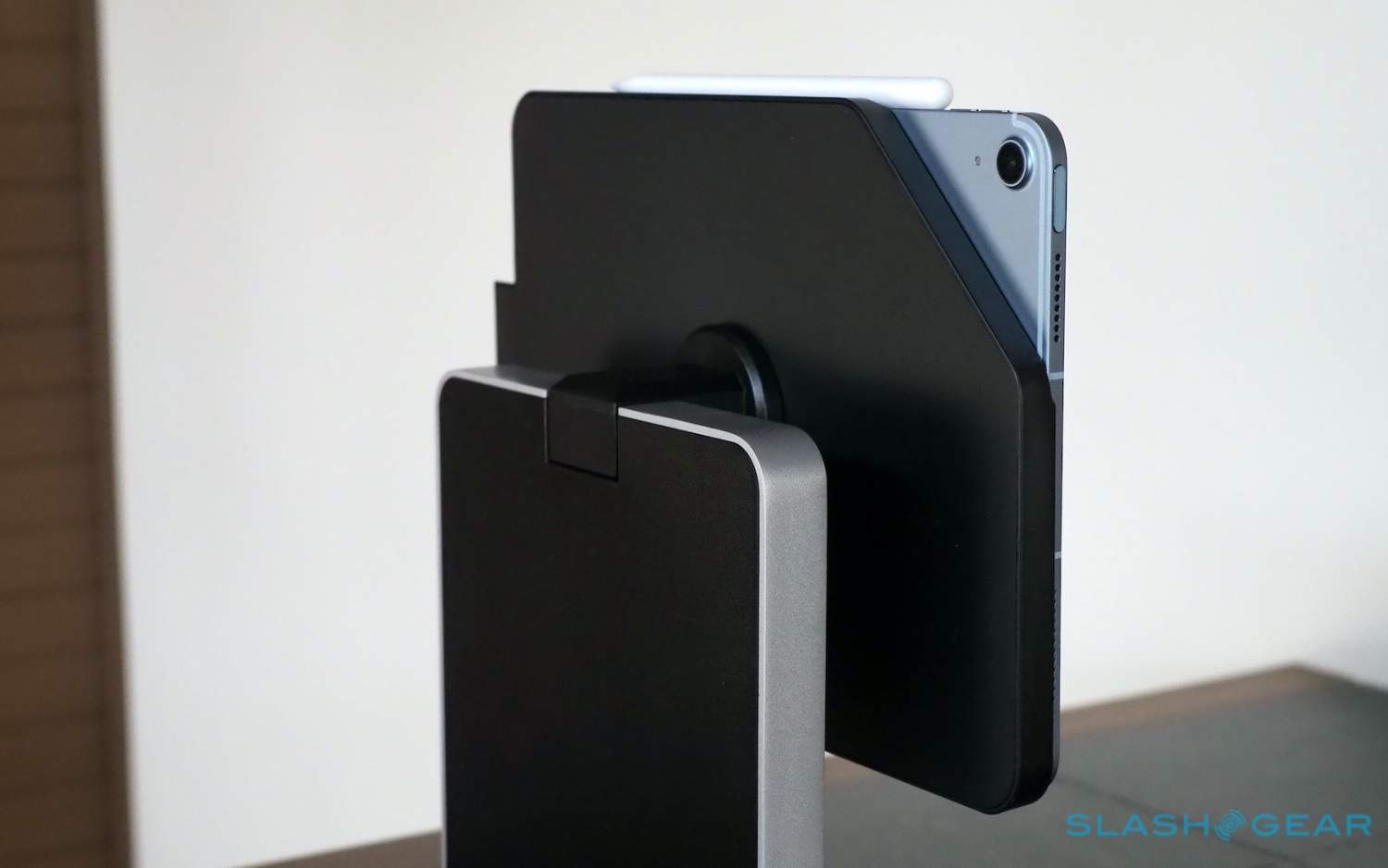 Kensington’s answer is a combination of a plastic bracket and magnets. You slot the iPad in USB-C first, and then press it back into the cradle. Two of the sides – those which have the potential to be on the bottom, depending on how the tablet is oriented – have a slightly raised lip, working with the magnets in the back plate to keep it locked in place. A cutout on the rear corner keeps the camera unblocked, and also works as a good place to pull the iPad out of the StudioDock again.

On the back there are three USB-A ports plus a gigabit ethernet port, HDMI, and the StudioDock’s power input. A UHS-II SD 4.0 memory card reader and a 3.5mm audio jack are on one side side; a USB-C port is on the other. Built into the dock connector are the ports for an optional 5W Apple Watch charger, which clips into place (or, with the supplied USB-C cable, can be used as a standalone charger when you travel). 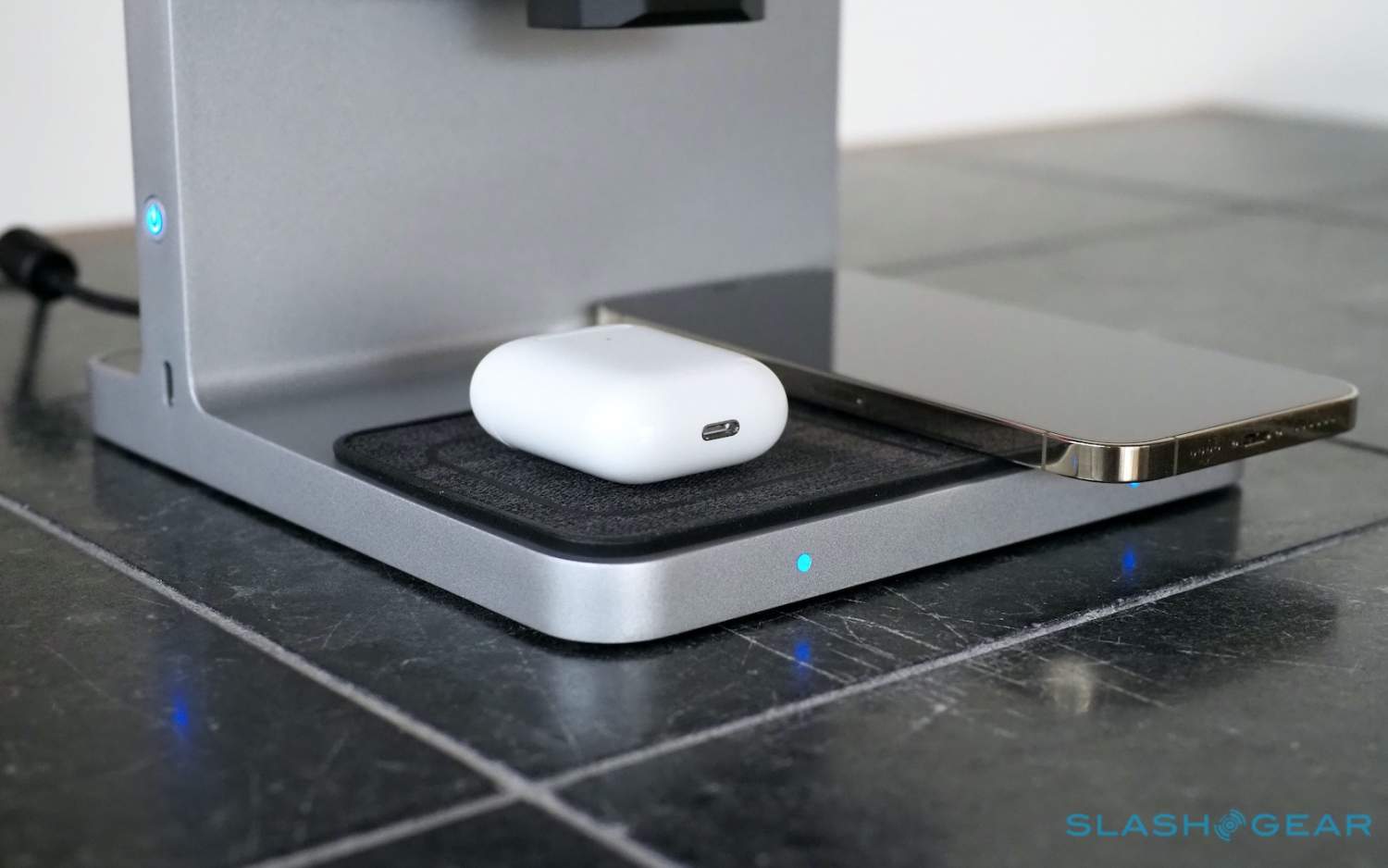 The “foot” of the StudioDock includes two Qi wireless charging pads, and indeed flexible charging almost seems to have been as much a focus for Kensington as iPad connectivity. The pads will charge your iPhone at up to 7.5W and your AirPods at up to 5W (or, of course, whatever Android device you might have; both pads top out at 7.5W). If you need more juice, the USB-C port on the side delivers 5V/3A and 9V/2A; each of the USB-A ports delivers 5V/0.9A. As for the iPad itself, that charges at 37.5W.

Somewhere Kensington seems to be a little ahead of Apple is in video output. The StudioDock supports up to 4K monitors at 60Hz via its HDMI port, and in theory it should just work without drivers or hassle. 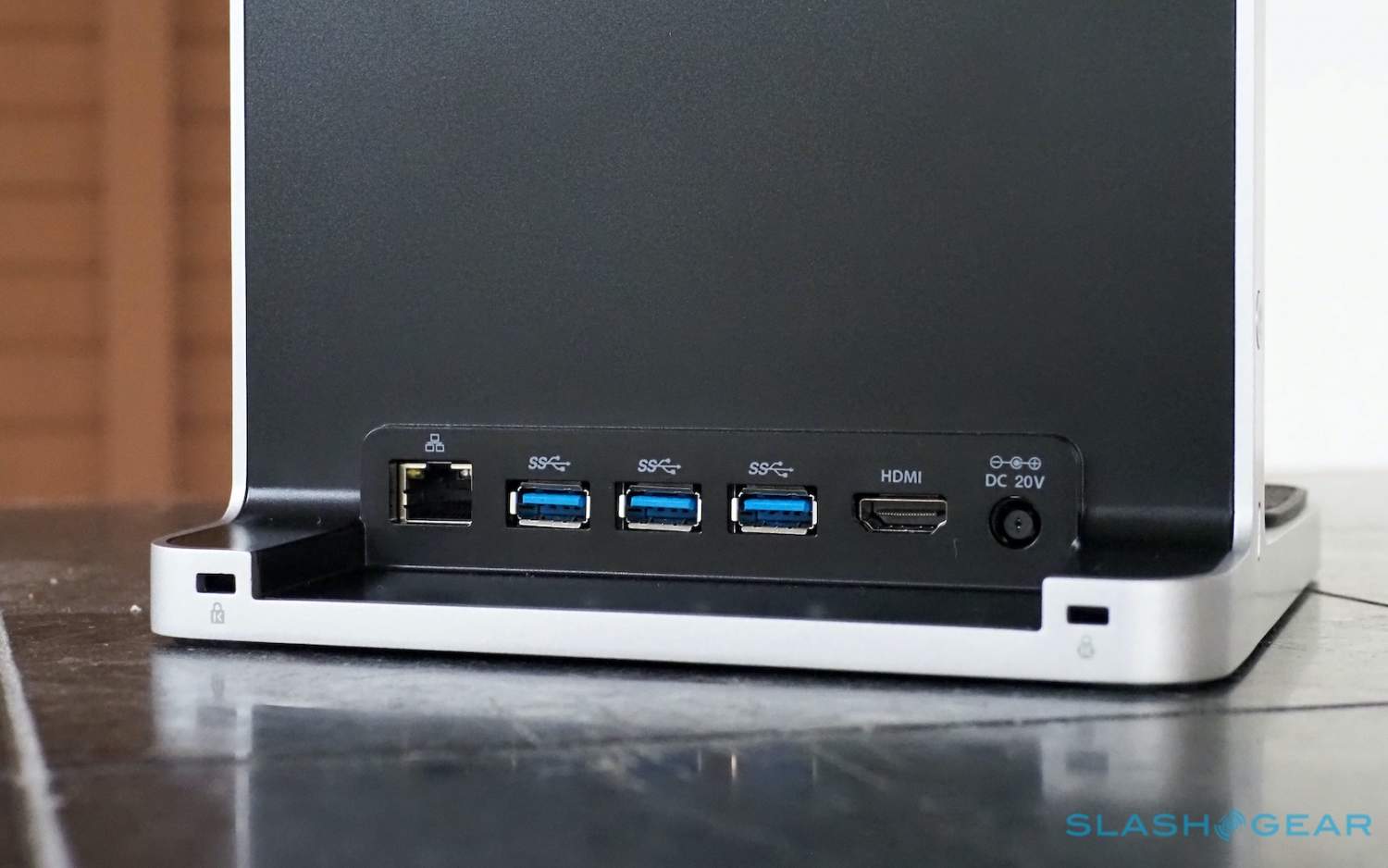 The reality, though, is that iPadOS and the app ecosystem isn’t quite ready for this multi-display world. On its own, having the iPad’s great screen elevated – and easily tilted and rotated – is so much nicer than using it in a keyboard case. It feels spacious and expansive, and even though the 11-inch screen on the iPad Air I used the StudioDock with isn’t exactly huge, the combination of Retina resolution and having it lifted up off the desk so I wasn’t constantly staring down made a big productivity difference. 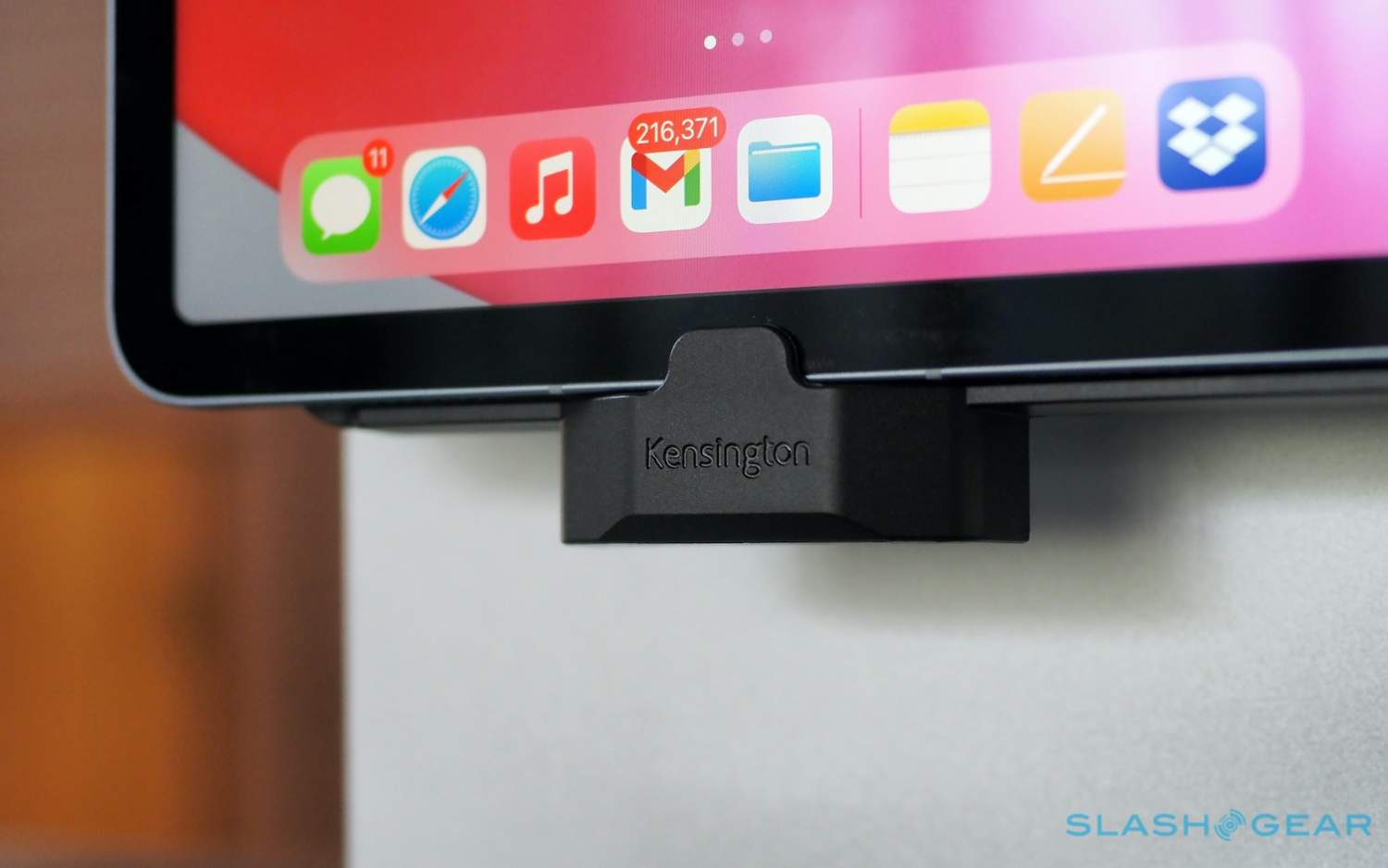 When it works, then, it’s great, but most of the time the second monitor feels wasted. I could certainly see mirroring being handy if you have impaired eyesight and simply want a larger version of your iPad display, but we’re still some way from the true multi-display support that a Mac offers.

All the same, there’s a lot to like about using the StudioDock and an iPad as your desktop daily-driver. Beyond the ergonomics of lifting the screen up and supporting external, full-sized peripherals – which can continue to pair via Bluetooth if you don’t want to use the USB ports – there’s the convenience of working around the dongle lifestyle that has become fairly unavoidable with recent Apple products. 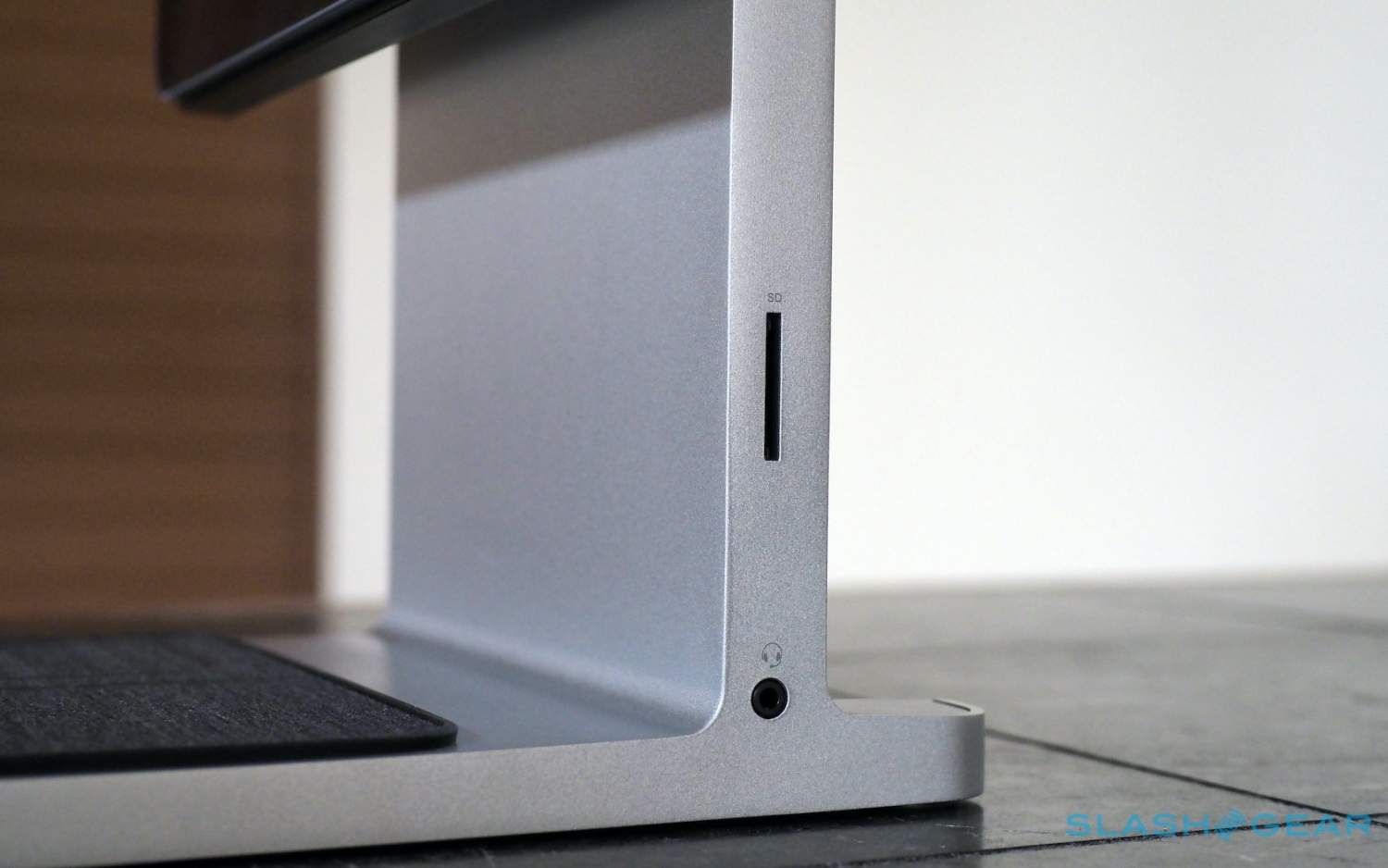 Having an SD card reader for importing photos, for example, has been a joy. I can pull out the memory card from my camera, slot it into the StudioDock, and then have that import images into my photo editing app of choice. If you’re in the habit of using an Apple Pencil for that editing process, the stylus is still readily accessible on the side of the iPad.

Since I do more typing than image editing, Kensington’s ergonomic decisions work out nicely for me. If you’re the opposite way around, though, the height that the iPad is held at could be an issue. I can definitely see arm-strain being an issue for extended art sessions, since while you can adjust the tablet’s tilt – including pushing it back so that someone standing on the opposite side of your desk could see the screen – you can’t change the height. 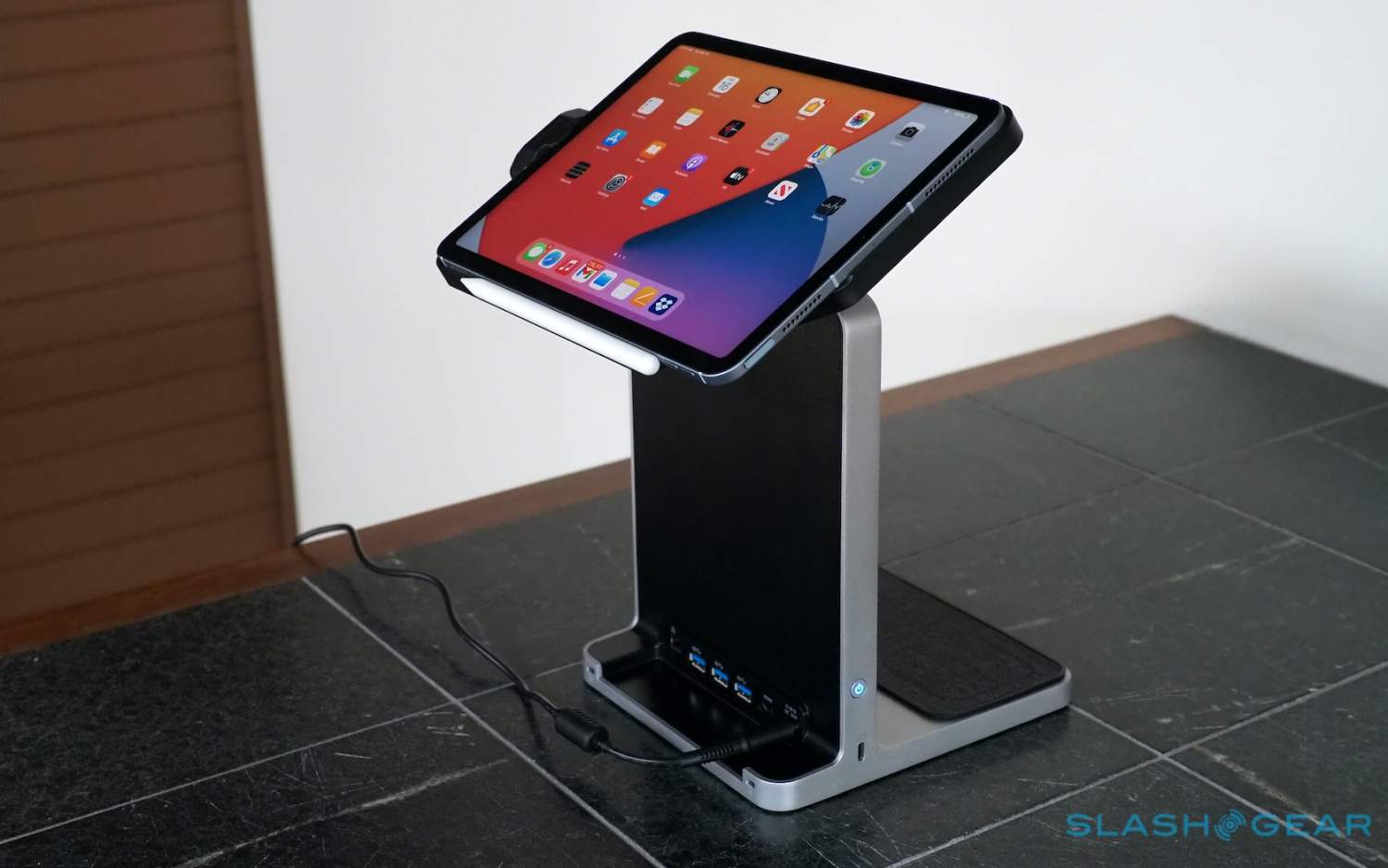 My primary design concern is future-proofing. Kensington doesn’t support interchangeable docking plates, which means that if you switch from, say, an iPad Pro 11 to an iPad Pro 12.9, you can’t bring your StudioDock along for the ride. Similarly, if Apple changes the design of future iPad models, there’s no guarantee that they’ll fit into this current generation of docks.

I’d have loved to see a removable docking system, which could evolve as Apple’s hardware iterates. Similarly, it would make replacing the docking plate itself possible: while the metal stand of the StudioDock is hefty enough to keep standing even as you tap at the tablet, the plastic dock section feels a little cheaper. Not to the point where I’m instantly concerned about longevity, but it’s a shame that if, say, the plastic hinge breaks then you’ll have to replace the whole unit.

I don’t so much begrudge Kensington the StudioDock’s price tag. Yes, $380-$400 isn’t exactly cheap, but then again neither are Apple’s USB-C dongles for the iPad Air and iPad Pro. If you want the Multiport adapter (for HDMI, USB-C, and USB-A), plus an SD card reader, an ethernet adapter, and a more powerful power supply, you’re looking at around $190. Even then, you’ll have to add a USB hub if you want to match the StudioDock’s number of ports, and you still haven’t got the useful desk stand or the dual wireless charging pads. 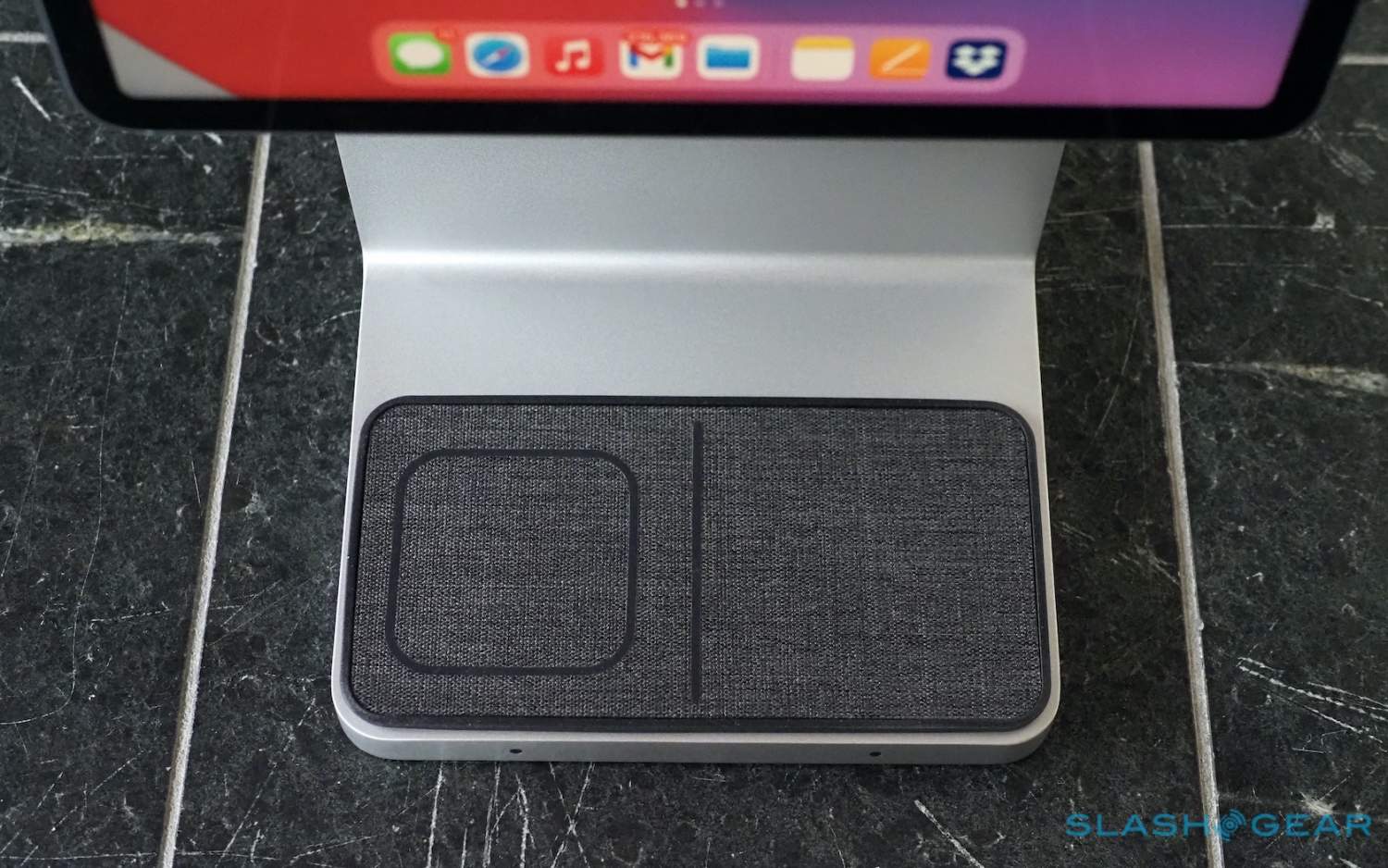 What I struggle with more is the potential longevity – or lack of it. Kensington designed the StudioDock with the current generation of iPad models in mind, and while Apple is known for sticking with the same aesthetic over successive refreshes, there’s inevitably going to be a point where a new tablet arrives that just won’t fit into your expensive docking station. 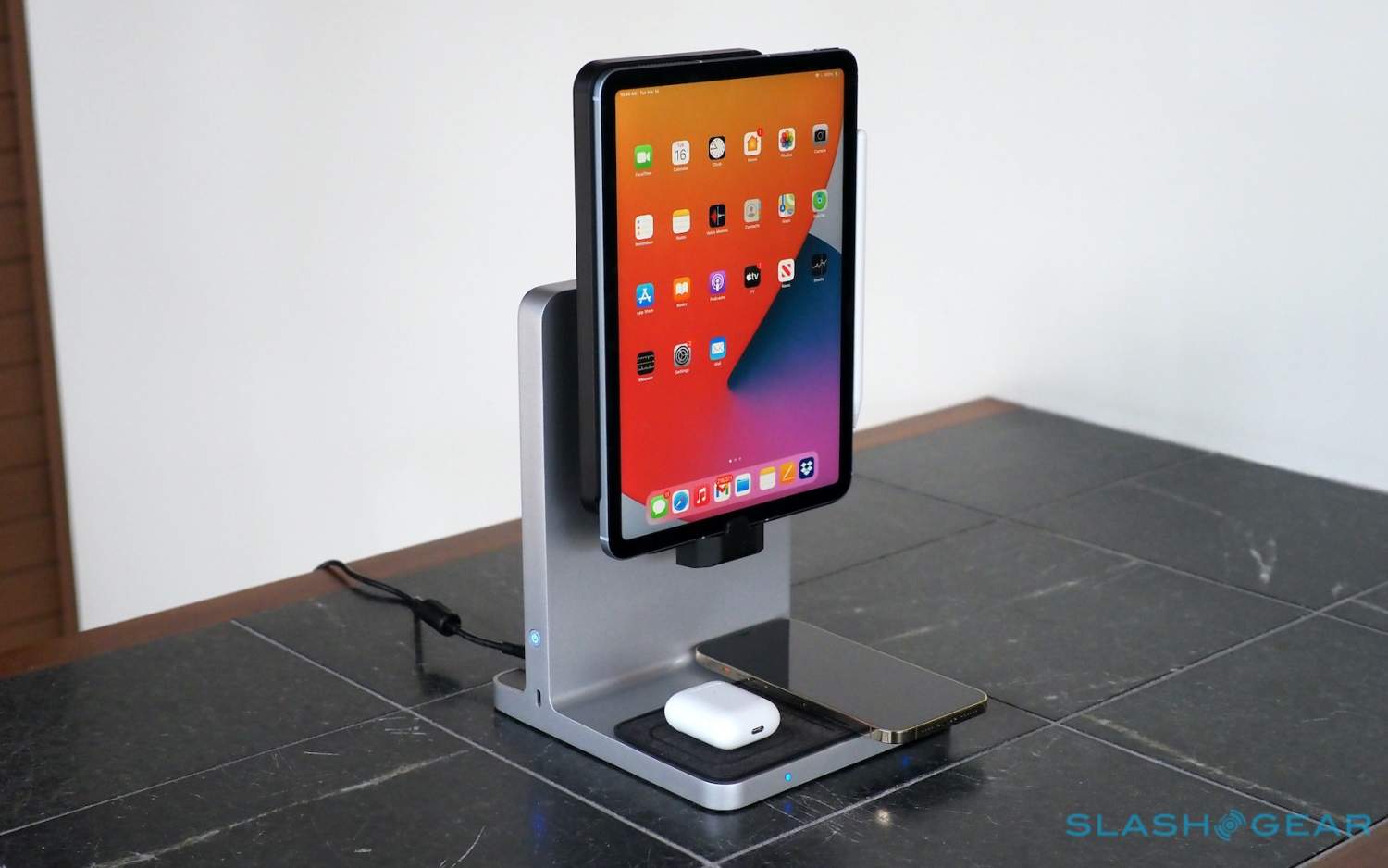 That’s not a problem you face if you have a separate hub, one that connects via USB-C cable for example. Then again, that sort of solution isn’t going to be as neat and aesthetically pleasing as Kensington’s is. Your decision, then, comes down to form versus flexibility, though the fact that Apple’s tablets typically seem to last much longer than the average laptop holds up makes the prospect of sticking to the same iPad Pro a little easier to stomach. If you’ve made the switch to iPad as your primary computer, this ability to turn it into a mini-iMac adds a clear layer of convenience on top of iPadOS, albeit for a premium price.