I’ve been using the new iPad Air (2020) for the past few weeks, throwing everything from writing and emailing to media editing at Apple’s midrange tablet, and I’m struggling to figure out why most people should step up to the iPad Pro. The middle ground between the entry-level iPad and Apple’s Pro series has always been a tricky one, but this latest Air nudges so close to what 90-percent of users are likely to need, it makes an instant case as the go-to Apple tablet right now.

iPad isn’t quite the generic term for tablets yet, but at this point it’s hard to argue that Apple’s game isn’t the main one in town. It has capitalized on that with a full range that spans the entry-level iPad from $329, through to the largest iPad Pro 12.9 at a thousand dollars or more. 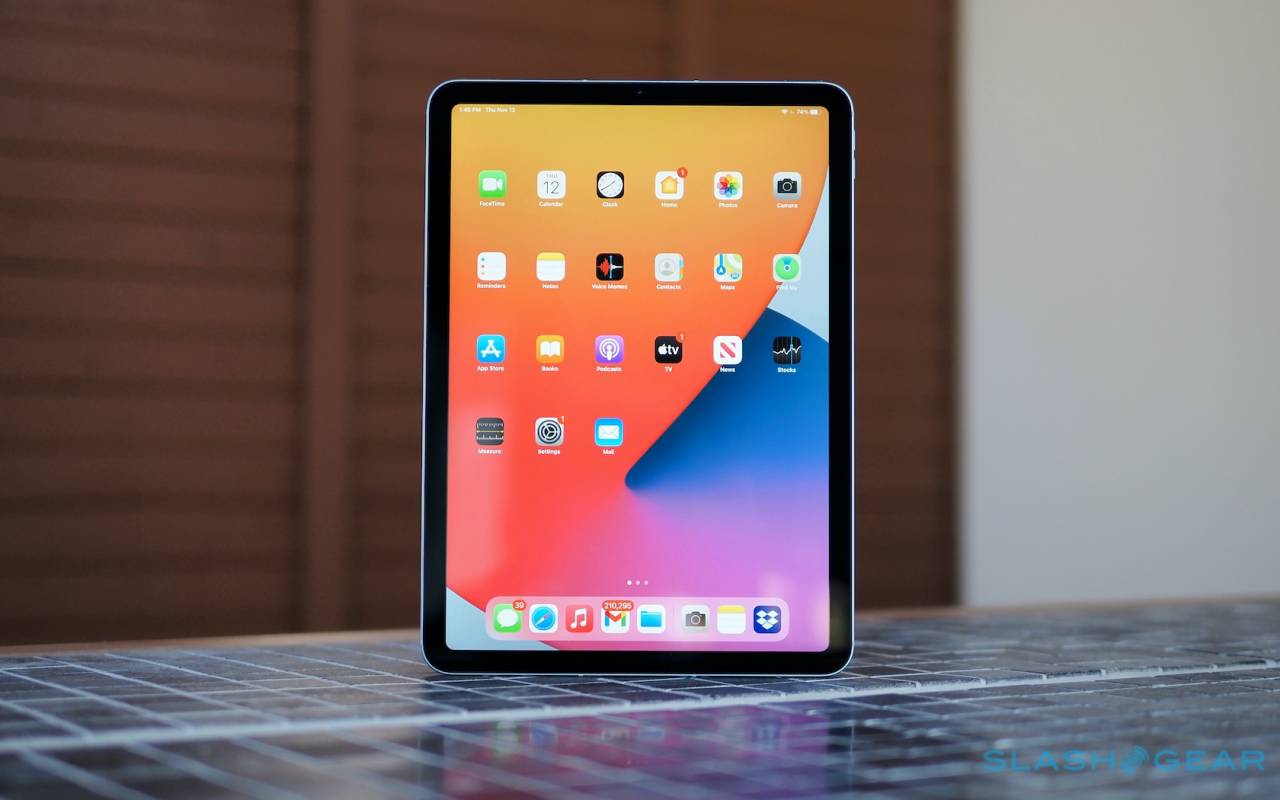 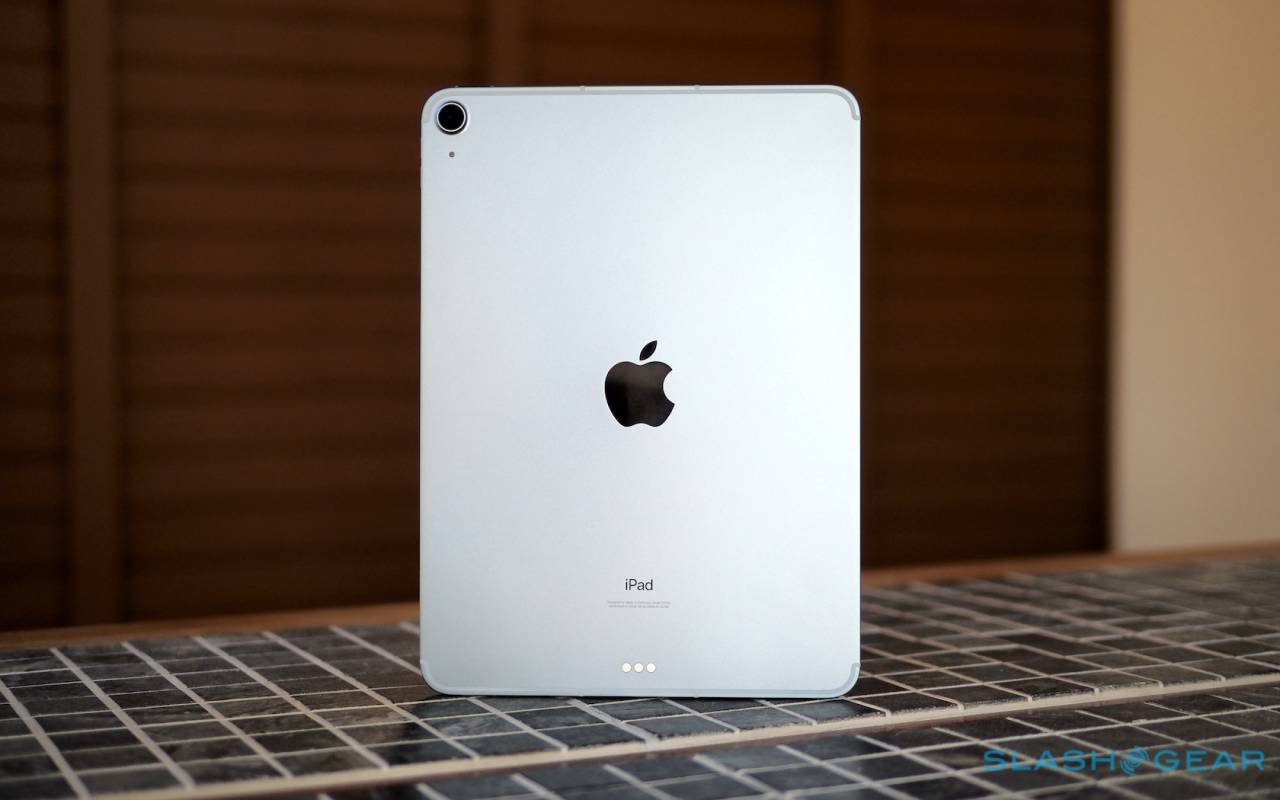 This time around, the iPad Air looks like its more expensive siblings, rather than the entry-level model. Its crisp edges and flat sides have echoes of the iPhone 12 family, too, and like the smartphones it feels expensive and premium in your hands. Along with the normal silver, gray, and rose gold finishes, there are now green and a beautiful sky blue. A 2nd gen Magic Pencil can cling – and recharge – on the side, as on the iPad Pro, and there’s a USB-C port for charging, not Lightning. 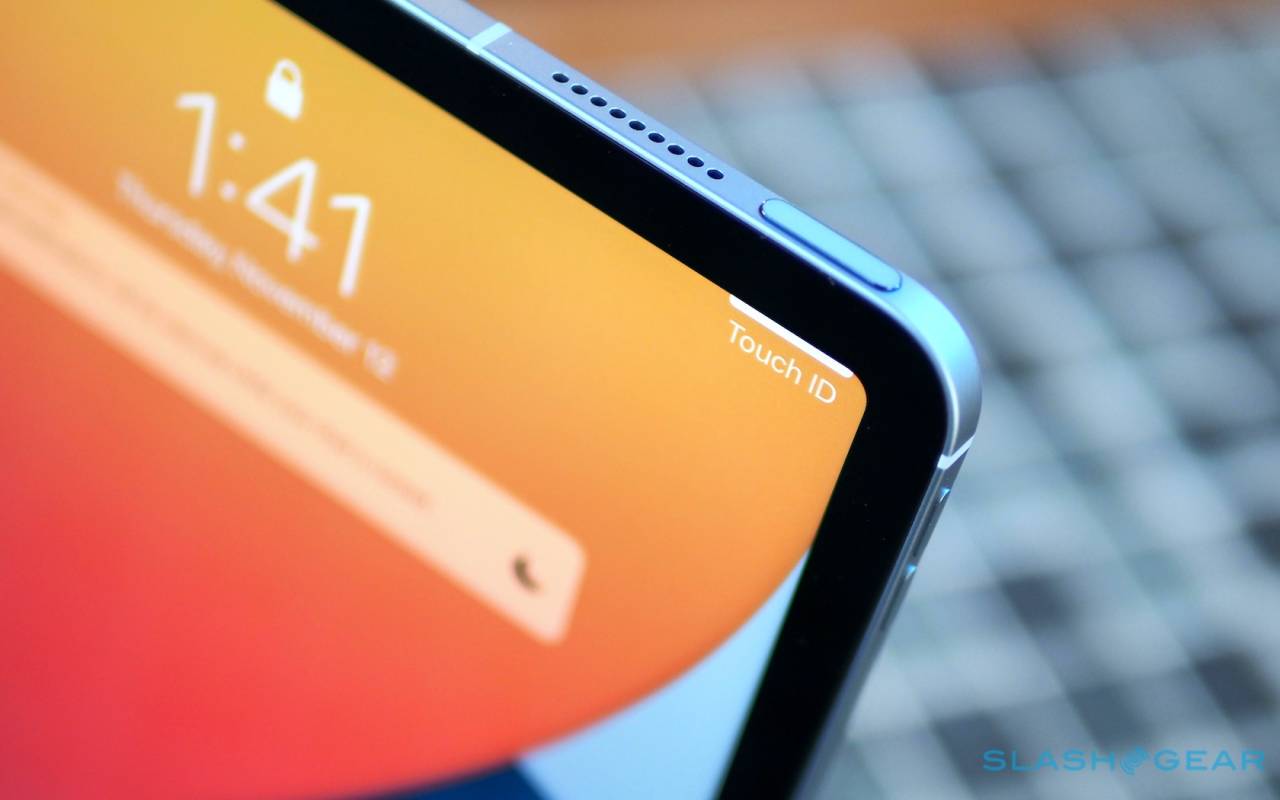 In some ways, I wish the iPad Pro and iPhone 12 copied from the new iPad Air. Not least of these is the power button, which now integrates a Touch ID fingerprint sensor. It’s fast and easy to use, and a reminder that, at the moment at least, trying to use Face ID while wearing a mask is a lingering annoyance.

Apple’s pick of display is slightly smaller and slightly lower resolution than the 11-inch iPad Pro, but since the 10.9-inch iPad Air panel clocks in at 2360 x 1640, both hit 264 ppi pixel density. It’s a beautiful screen, with P3 wide color support and both an anti-reflective and fingerprint-resistant coatings, though glare and smudges do still gather. Peak brightness is down slightly compared to the iPad Pro, at 500 nits versus 600 nits, but that’s not been a problem in my day to day use. 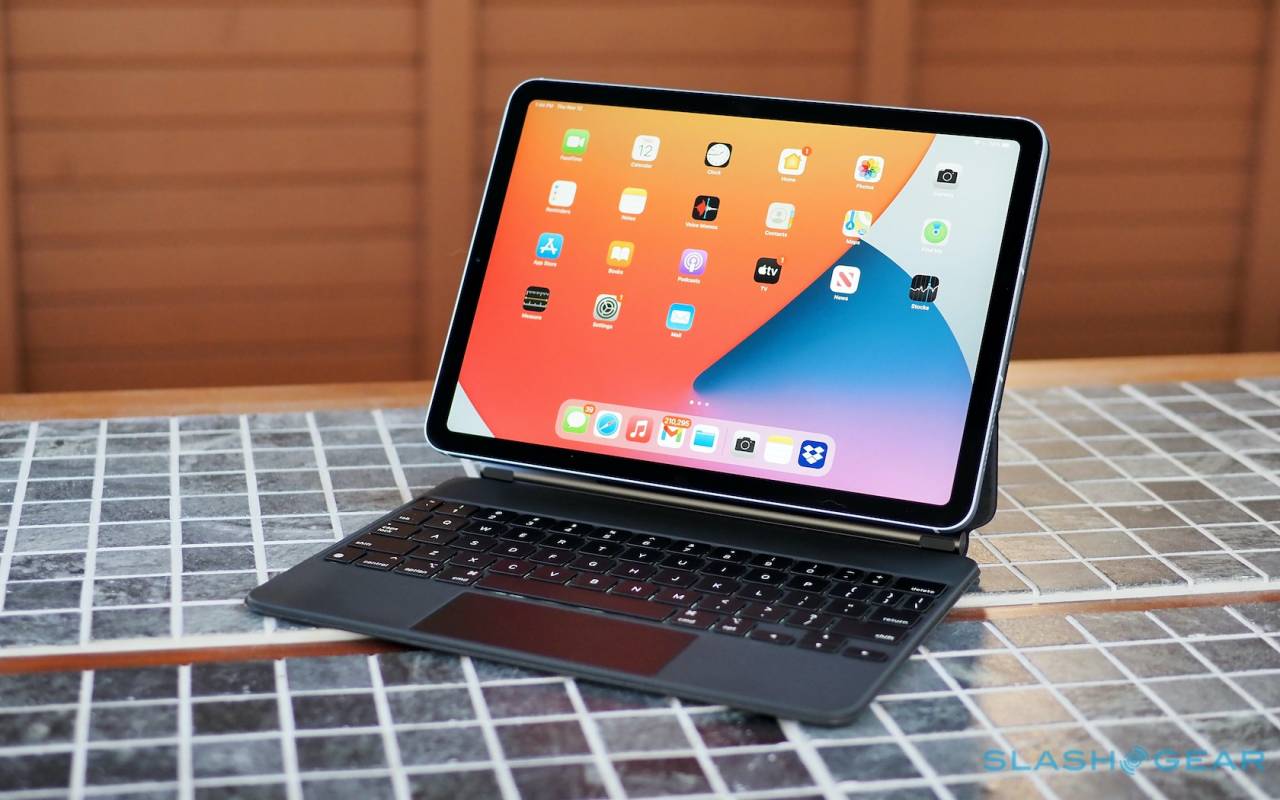 Neither has the absence of ProMotion. Apple’s 120Hz refresh rates look incredible on the iPad Pro, and were I a graphics whizz I might be tempted to step up to the $799 iPad Pro 11-inch just to get the faster screen reaction. iPadOS’ smooth animations, though, still look zippy on the new iPad Air, and so I can stomach the difference. 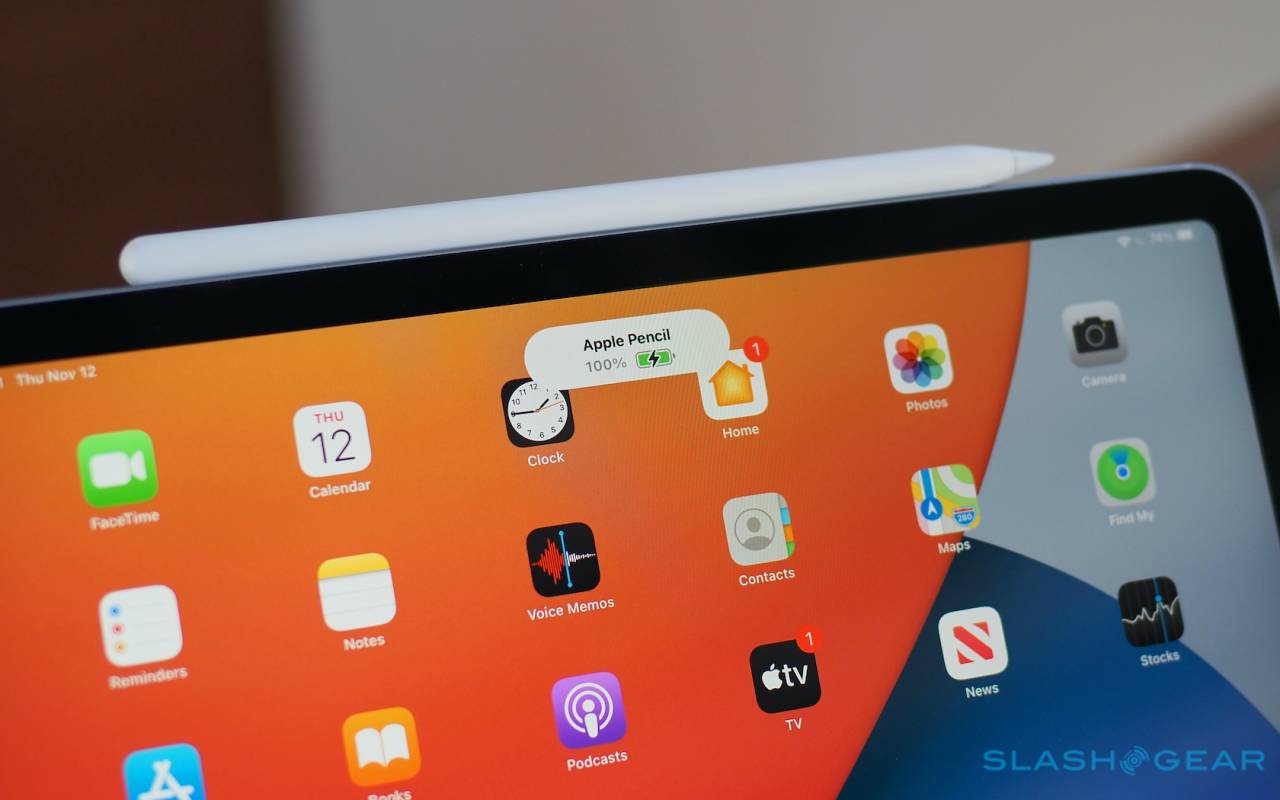 Running all that is the Apple A14 Bionic chipset, the same as features in the iPhone 12 family, and a cousin to the new M1 that will power the first Apple Silicon Macs. Here, it has six CPU cores and four GPU cores: in contrast, the latest iPad Pro models use the older A12Z, so the individual cores are a little slower but the chipset has more of them with eight apiece. 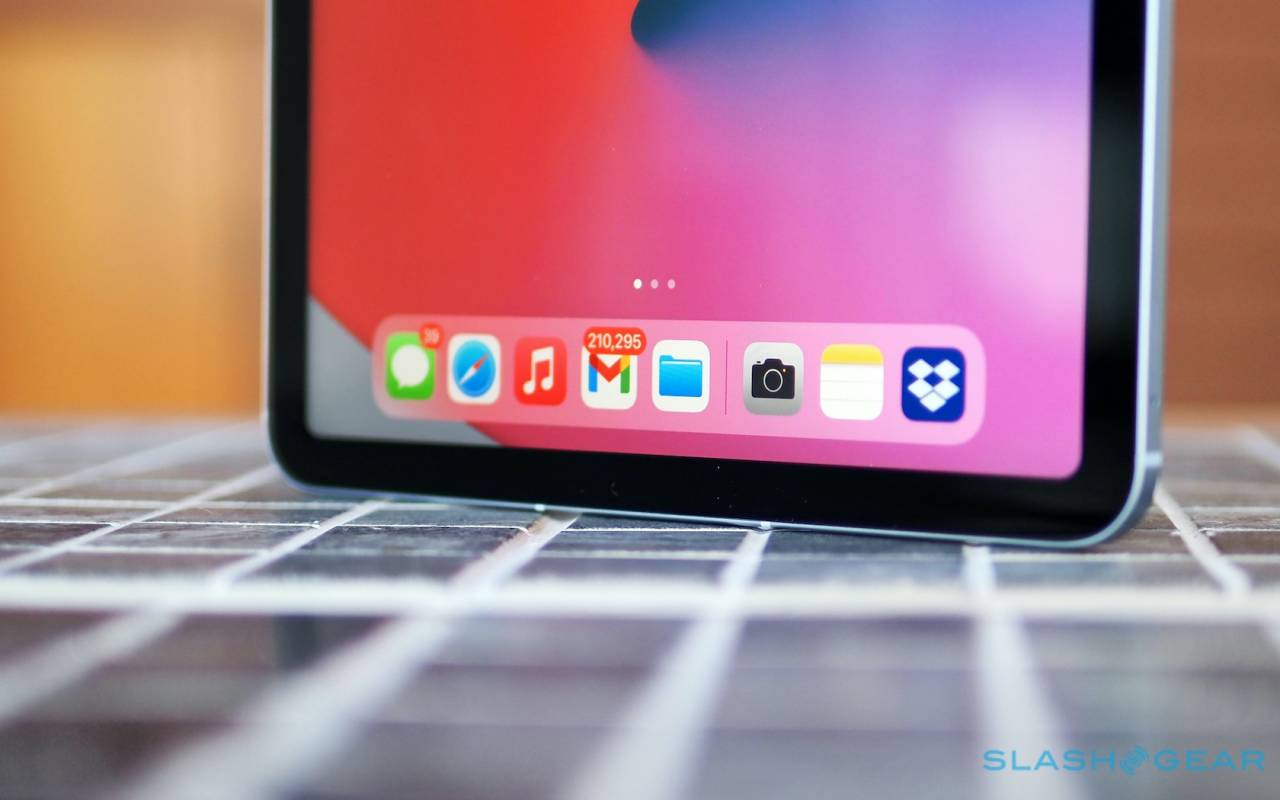 My takeaway is that, just as the iPad Pro demonstrated handsomely that it could do the sort of tasks that previously might’ve demanded a MacBook Pro, this new iPad Air also shows its heels to mainstream (and higher) notebooks. There’s no lag, no sluggishness, no interminable waiting as “busy” icons swirl. Quite honestly, it has me very excited for macOS on the M1, because Apple has absolutely demonstrated its potential when it’s responsible for both hardware and software.

Much in the same way, iPadOS is a more accommodating place than it once was, when it comes to the sort of tasks that might typically have me turning to my laptop. The new floating launcher, summoned with a swipe up from the bottom of the screen, makes using apps in split-screen easier, and the widgets in the Today View are a nice addition. I do wish there was more flexibility to place them anywhere on the home screen, though, as iOS 14 supports on the iPhone. 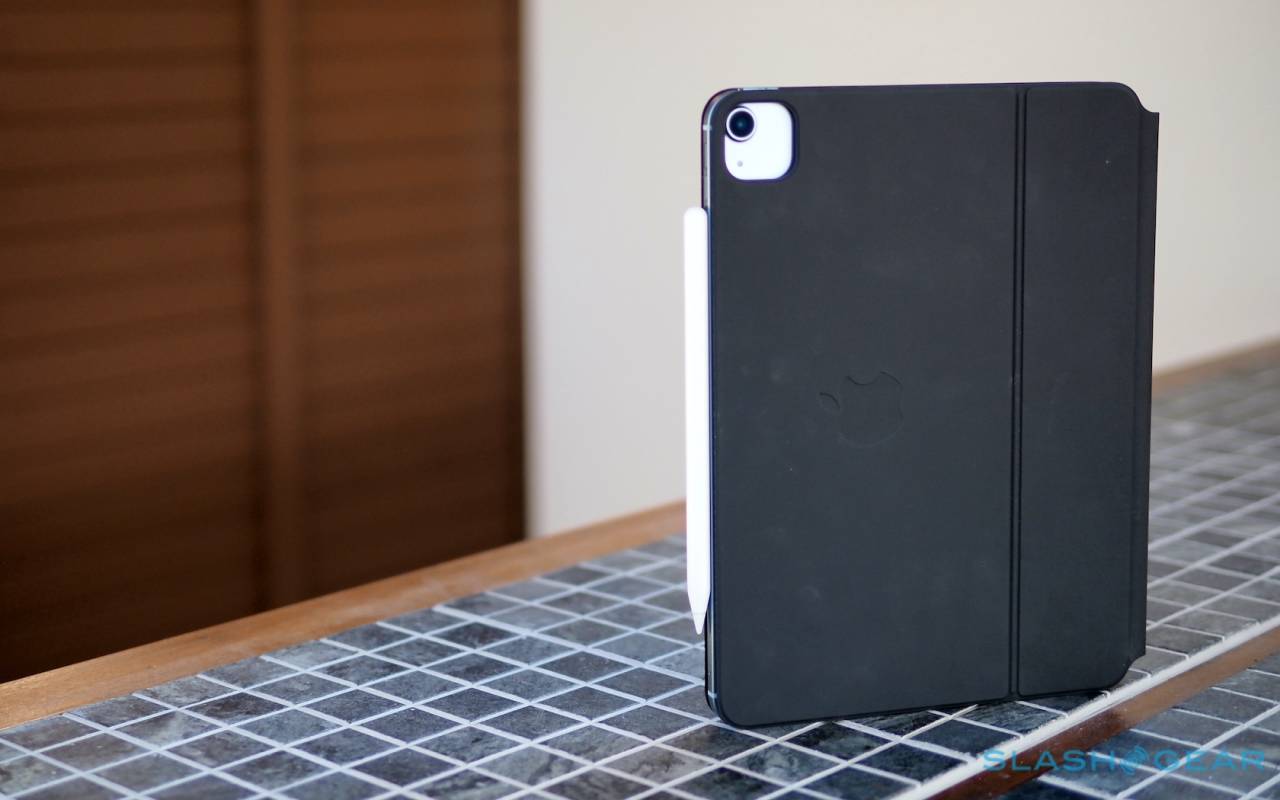 The $299 Magic Keyboard is optional, but it’s hard to imagine most people going without a physical keyboard for any serious use of the iPad Air, and Apple’s does have its advantages. It adds weight and thickness, yes – it’s about 2.34 pounds altogether – but it integrates so cleanly with the magnetic attachment, and the keys are so pleasant to type on, that it’s the obvious pick. 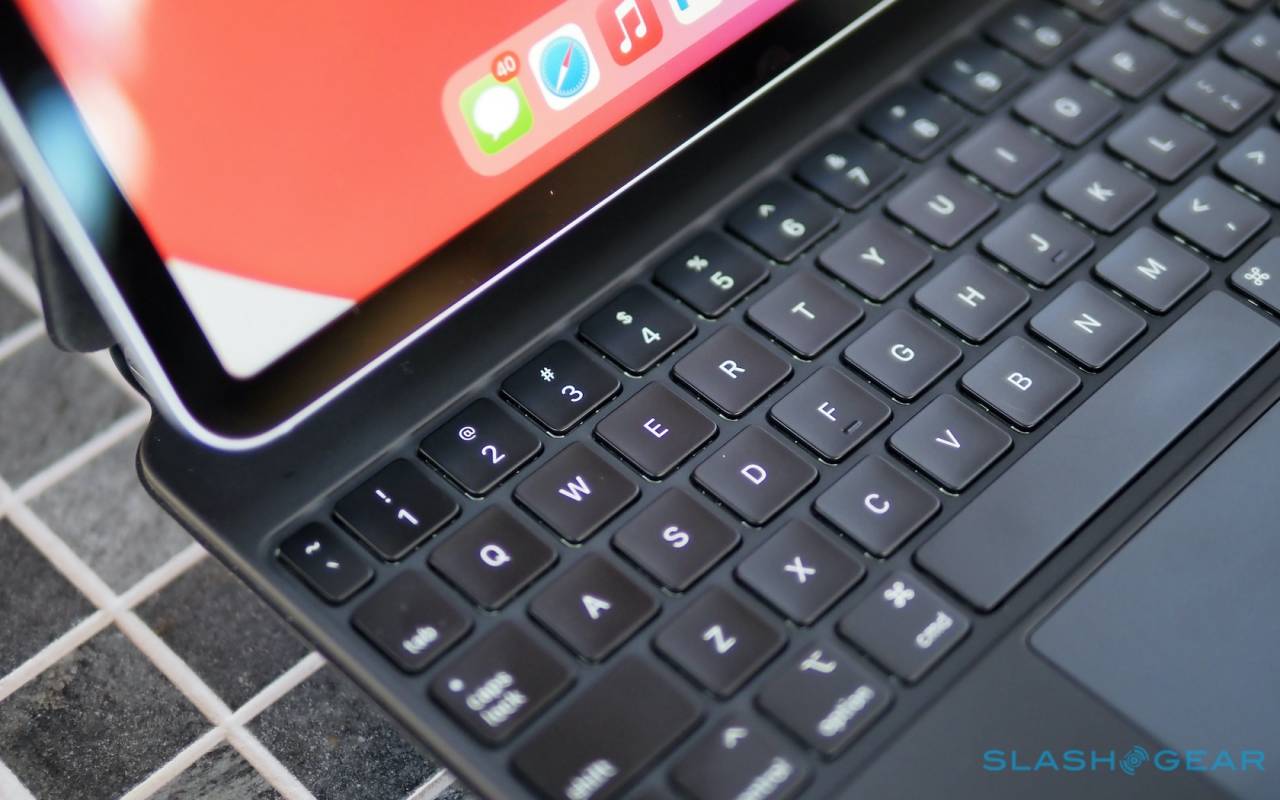 Indeed, switching between the iPad Air’s Magic Keyboard and the keyboard on the latest 16-inch MacBook Pro, the tablet’s ‘board felt more stable and less hollow. There are only two big drawbacks, I’ve found. The first is that the smaller size means the hyphen and equals keys are half-width: I use the former a lot, and am still struggling to hit it consistently. More annoying is that the iPad Air doesn’t quite tilt far enough back for my liking. It’s worth noting that there are a growing number of third-party keyboards, so it’s worth shopping around for the key fix that fits your fingers and budget. 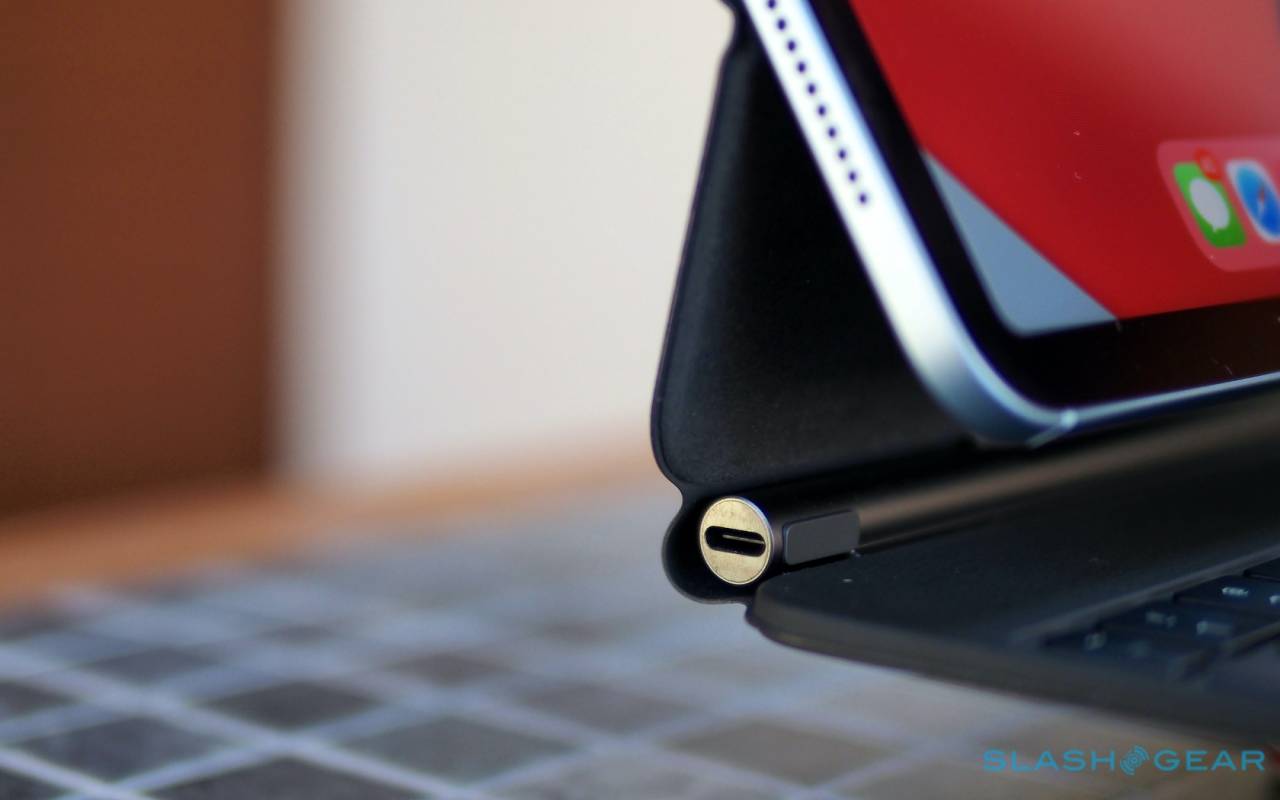 There are, of course, sacrifices in going for an Air not a Pro. You get two speakers, not four, but it still sounds fine and I usually reach for AirPods anyway. On the back there’s a single camera, a 12-megapixel sensor that shoots 4K video, but no ultra-wide and no depth-sensing LiDAR either. Given I don’t typically use the rear camera for anything other than acting as an impromptu scanner, and AR apps and experiences are still few and far between, neither of those omissions really bug me.

On the front, the big news is the 7-megapixel FaceTime HD camera. Without the TrueDepth camera that the iPad Pro uses for Face ID you don’t get depth measurements, so you can’t use Portrait mode, but that’s not the real advantage here. That’s the fact that, with so many more video calls on my calendar at the moment, the noticeable uptick in quality from the iPad Air’s front camera versus the entry-level iPad (or, for that matter, the measly 720p camera in the MacBook Pro) pays dividends for cleaner streaming. 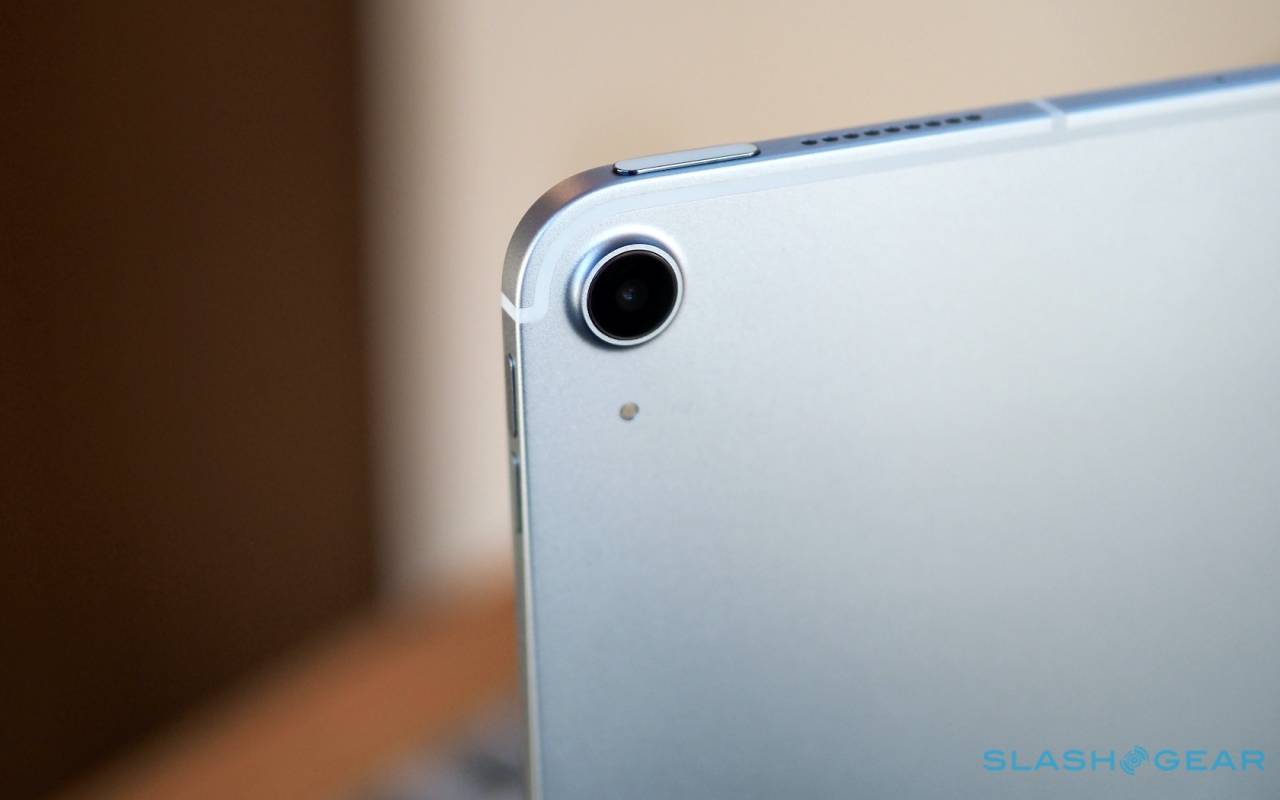 It’s there, though, that you get a reminder that despite Apple’s efforts to make the iPad a laptop alternative, there’s still some ways to go. If I’m happy to focus entirely on my video call, that’s fine; if I want to take notes, though, or go researching online while it’s happening (or, okay, distract myself from dull group calls), iPadOS turns the webcam off. I suspect it’s trying to respect my privacy, but it’s an easy giveaway to others that I’m sneakily multitasking.

Apple says you’ll get up to 10 hours of web browsing or video playback over WiFi (or 9 hours on cellular data), the same as both iPad Pro versions. In practice, using the iPad Air as much like my regular laptop as possible, I went through a full day and into the evening before I needed to recharge. Used more sporadically, figure on several days between plug-ins. 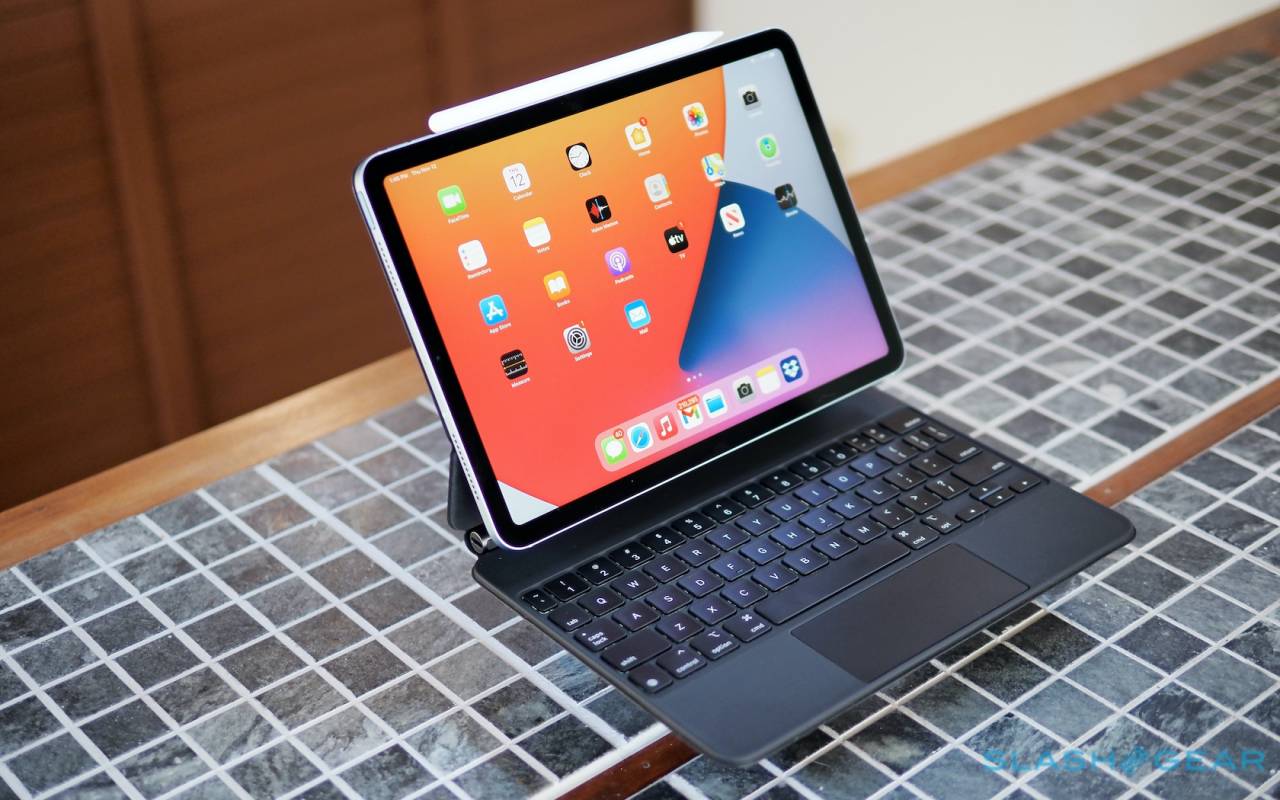 What stands out about the 2020 iPad Air is how well-rounded it is. Yes, there are still people for whom the iPad Pro will be a better fit – those whose go-to apps benefit significantly from ProMotion, for example, or a larger display, or who want more storage and are willing to pay handsomely for it – but I suspect the new iPad Air will quash tablet upgraditis for most people.

As a result, though it may be $100 more than the old Air, this new 4th generation iPad Air feels like it offers the best of all worlds. Affordable, powerful, beautifully designed and constructed, and increasingly able to do the things that once would have almost certainly demanded a “full” laptop to achieve. Even if that doesn’t make it the device for you, as a teaser of what Apple Silicon will do for Mac, you should be excited.