First steps, then sleep, and now Jawbone is taking on food tracking in the wearables’s company’s latest bid to quantify life. UP 3.2, the latest version of the Jawbone iOS companion app for the UP and UP24 bands, aims to do what no food logging platform has quite managed: make logging as close to automatic as possible, and then deliver personalized recommendations around things like health and weight loss.

UP 3.2 introduces a freshly tweaked UI, in addition to debuting new features that Jawbone hopes will help answer two questions it regularly hears from users: “How am I eating?” and “How can I eat better?”

76-percent of UP users have a specific weight goal in mind, Andrew Rosenthal, Jawbone’s manager for wellness and platform, told me ahead of the new app’s launch. Meanwhile, 84-percent of people who log weight do so with an aim to lose it. 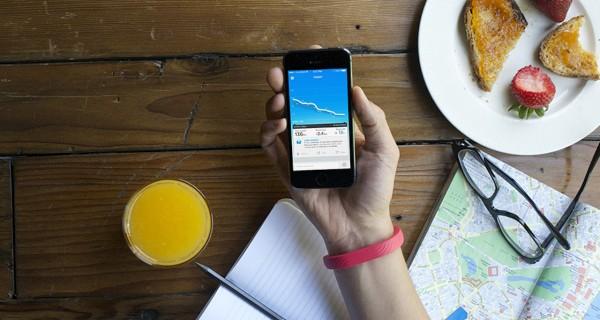 Frustrating those weight-loss efforts are three factors, Rosenthal argues. First, logging has generally been a tedious process, which discourages consistency. Second, people commonly eat out at restaurants, where they’re often unsure of what’s in their meals along with what would be the most healthy option on the menu. Finally, there’s a shortage of education and guidance as a result of the logs themselves.

Problem is, while the UP app and accompanying bands can count steps without the user’s conscious involvement, along with sleep, food tracking requires more attention. UP 3.2 approaches things in several ways. A camera mode, for instance, allows records of food to be snapshotted, while a barcode reader pulls in nutritional details on preprepared meals. A water logger makes figuring out hydration more straightforward, in a similar manner to how Jawbone Coffee did the same for caffeine. 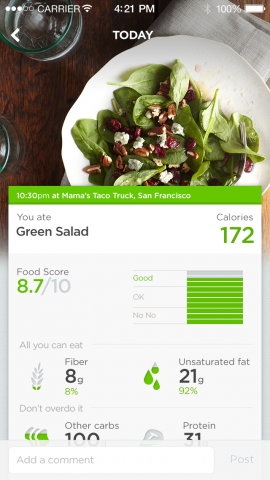 Arguably the gem is the restaurant menu and food database, however. Jawbone is building a huge dataset, including everything from sandwiches at Starbucks, through steak at popular chains, to common breakfast items. For those places without an official menu, users can input their own nutritional findings, and eventually this crowdsourced data gets polished up and fed back into the app itself.

What Rosenthal expects to make UP 3.2 stickier to loggers is how the food data is presented and inputed. Jawbone uses context at each stage: the list of restaurants is ordered by proximity, as well as the time of day and the most likely meal type at that point, and as you pick an item the app automatically suggests common pairings.

So, if you say you’re having an egg for breakfast, the app will ask if you’re having that with bacon, perhaps, or toast. Order a burger, and UP will remind you to log the ketchup if that was added.

Jawbone’s goal is full autonomy of the logging process, though Rosenthal concedes that UP still has some ways to go on that. Nonetheless, there are some shortcuts thanks to Jawbone’s APIs. Orange Chef’s $149.95 Prep Pad, for instance – a kitchen scale that can feed precise nutritional information into its companion iPad app – will now push that same data to the UP platform

That means, if you’re preparing a meal from scratch, you can still include accurate nutritional details into your log. Those who order food for delivery from services like Munchery, PlateJoy, and HealthyOut can have their meals automatically logged, while soon NuMi’s recipe recommendation engine will take into account calorie goals, time of day, and lifestyle preferences, as well as telling UP what you ate.

The second half of UP 3.2 is guidance: taking the logged meals and extracting some sort of context from them to make it all worthwhile. “Surfacing data isn’t sufficient,” Rosenthal points out, and so Jawbone has some new metrics to try to replace the often-confusing nutritional labels on all bought foods. 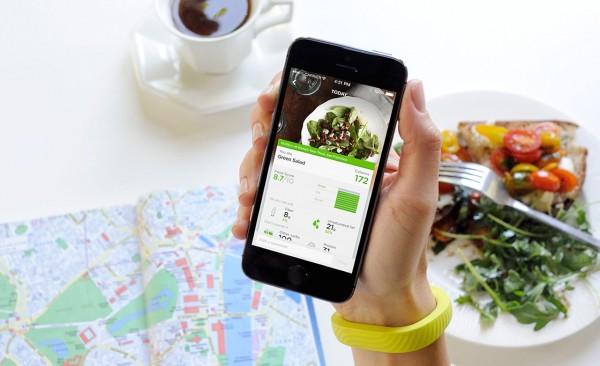 Key to that is the Jawbone Food Score, based on individual ratings for fat, fiber, protein, sugar, sodium, and other factors. Rated out of 10, and color-coded according to which should be primary picks and which should be avoided, the overall Food Score for the day is tracked (along with calorific intake) to give an easier at-a-glance rating on overall intake.

It’s not perfect, at least not at this stage, and Jawbone concedes that the food functionality is very much a first-gen feature. The biggest drawback as I see it is the fact that it’s all based on a single type of diet, in which protein and carbohydrates are prioritized, whereas other diets – like paleo, low-carb, or other alternatives – aren’t considered. 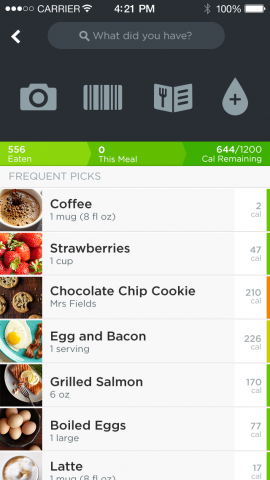 Since the Food Score is based on offsetting the primary “good” categories (fiber and unsaturated fat) with the rest, it could be meaningless if you’re not following that one dietary style. In an example, Rosenthal showed me how UP 3.2 might suggest a list of possible snacks: in that list, a bagel had a higher Food Score than goat cheese, presumably because of the fats in the cheese. However, someone on a low-carb or paleo-style diet might actually prefer the higher-fat option, and as such the value of the single number rating is undermined.

Rosenthal agrees it’s not the right approach for everyone, but tells me he expects third-party developers to weigh in and address that with their own custom apps. An app for diabetics might place greater emphasis on sugar intake, maybe.

Jawbone is of course already working on the next version of UP, but with developers able to tease out the app’s logged information, as well as feed its own back into the database, there’s the potential for all manner of diet-specific apps that cater to non-traditional approaches to eating.

The new calorie bar isn’t the only UI change introduced with this new release. The UP Insight Engine, which creates the pop-up cards making suggestions or setting challenges, has also been refreshed, brought into prime app real-estate on the homescreen, and now able to tap into food too. 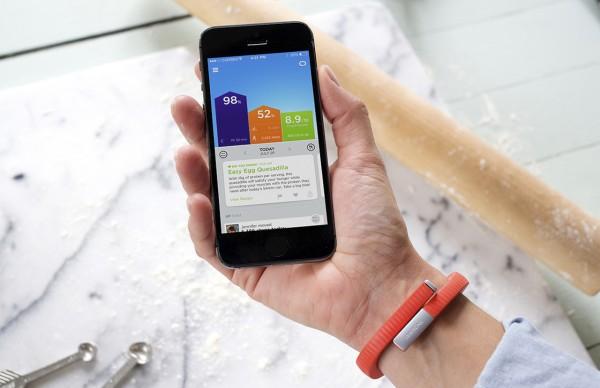 So, conclusions based on sleep, your last meal, and how much exercise you did the day before can be drawn, or UP might suggest stopping eating sooner or having a particularly healthy snack after a workout. The “Today I will…” challenges can also set food goals, such as eating more fiber, as well as giving more comprehensive suggestions as to how you might actually do that.

I’m yet to properly try the new UP app, but early impressions are tentatively positive. Food logging is often considered the next step in the quantified-self movement after steps and sleep, but has traditionally demanded a considerable investment in time to make it worthwhile. UP’s contextual restaurant and menu engine, and its clever suggestions to accurately round-out your meal records certainly look to be more user-friendly than what has come before. 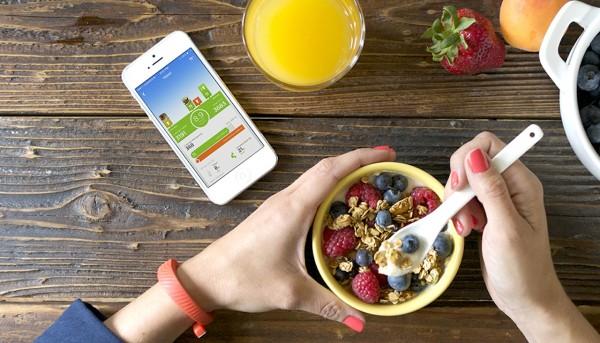 It’s not the only approach we’ve seen, however. Devices like the Vessyl smart cup which promises to figure out what liquid is inside and how much is being drunk over the course of a day, is a good example, though we’re still not at the stage where you could scan in the details of a full plate of food as easily as you’d boast about it with a photo on Instagram.

The HAPIfork, which tries to figure out nutritional information based on what you’re shoveling into your mouth is another example. Of course, each is free to use the Jawbone APIs, too.

Jawbone UP 3.2 is released for iPhone today. An Android update is in the pipeline, Rosenthal told me, and there’s more to come in software and hardware. For more on the UP24, check out our full review.