You can’t accuse Jawbone of taking shortcuts with its fitness wearables. The company prematurely pulled the plug on the original 2011 UP and took it back to the lab to work on battery and stability for a year before the 2012 version was released, and it’s taken another twelve months for Jawbone to settle on a wireless implementation it’s happy with. The Jawbone UP24 is the culmination of those efforts, now toting Bluetooth LE for real-time exercise and sleep updates on your iOS device. Meanwhile, Jawbone also has UP 3.0 ready for release, the latest version of its iPhone app, and which will also work with the existing UP (which stays on sale, too), so is the UP24 worth the upgrade? Read on for our review.

Jawbone hasn’t strayed too far from the original UP with the UP24’s design, resisting the urge to add a display. The company tells us that’s because users are already carrying a far better screen in their pocket or purse, in the shape of their smartphones, to warrant the hit on battery life and weight including it on the rubberized band itself would involve. 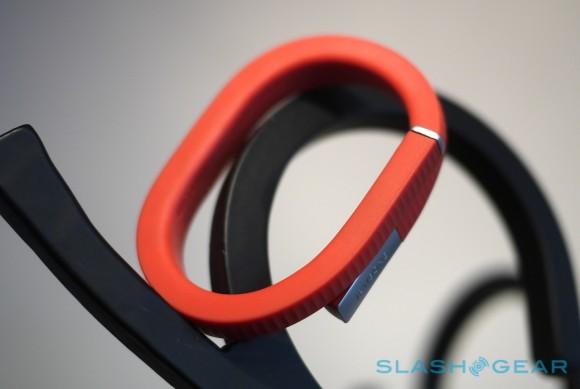 Instead, you get a different finish to the band – crosshatching that swirls into a curve across the broader underside, rather than the zigzag ridges on the original UP – and a new, softer-edged multifunction button. The latter is a welcome change, as it’s easy to scratch yourself on the UP’s sharp-sized key. Under the pull-off cap, which clings tenaciously in place, is a smaller, 2.5mm plug for charging with the included short USB dongle.

Jawbone says the change in size was to make clear to users that Bluetooth LE is used for transferring data; unlike the original UP, the UP24 won’t push across the exercise tracking by plugging it into the headphone socket of your phone or tablet. However, it also means you can’t use the original UP charger dongle to recharge the UP24.

As before, there’s a black “onyx” version of the UP24, which is released today alongside a new “persimmon” finish that’s a striking orange. Three sizes – small, medium, and large – are offered to suit different wrists, and it’s water-resistant to withstand a splash in the shower or if you’re washing dishes (though Jawbone says it’s not fully waterproof).

Using UP24 is straightforward. The flexible rubber band snaps around your wrist and is comfortable for extended periods – useful, since Jawbone suggests wearing it at night, too, to track your sleep – and pressing and holding the button switches it between active and sleep modes. A different press combo puts it into Stopwatch Mode, signaling a specific bout of activity – weight lifting, yoga, stationary biking, etc. – that gets flagged up in the companion app with an estimated calorie burn. It can communicate with you via discrete vibrations and two red LEDs that show which mode it’s in. 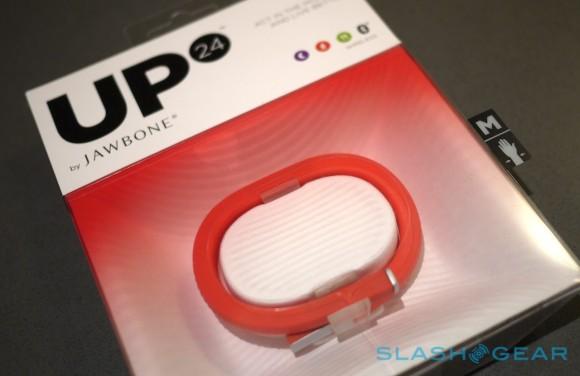 Jawbone claims the UP24’s battery is good for up to seven days of constant use, even given Bluetooth being powered on continuously. That’s actually looking like a conservative estimate, with the battery meter in the app claiming we still have three days use left despite having worn it continuously for almost six.

Welcome as the addition of Bluetooth LE in the UP24 might be, Jawbone’s new UP 3.0 app is arguably more important, given the new features it introduces to uses of both generation of band. Available for iOS only, initially – Jawbone tells us an Android version is in the pipeline, but that the extra complexity of trying to cater for dozens of different devices means it’s not ready alongside its iPhone/iPad counterpart, and there’s no public timescale for its release – almost all of its abilities are shared by UP and UP24. 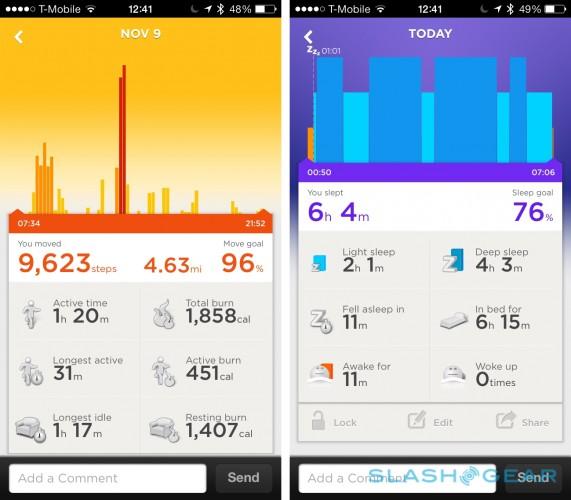 According to Jawbone product manager Brad Kittredge, the changes in the new app come after the company did some deep-diving into the stats UP has been collecting so far, all 50bn+ steps of it. Some clever analysis has meant that Jawbone can reach both qualitative and quantitative conclusions: those people who sleep with a partner in the same bed, for instance, go to bed on average 35 minutes earlier than those who sleep alone.

UP 3.0, therefore, aims to deliver more personalized data, more insights as a result of that data, and better recommendations to improve it, as well as celebrating achievements over time. That uses iOS’s notifications system to push prompts and triggers to the lockscreen, among other things, with a new “Try This” system that makes suggestions as to what you might like to challenge yourself with a goal based on your past behaviors.

Jawbone calls this “Today I Will” and initially it’ll cover sleep, steps, and drinking eight glasses of water a day. Exactly which you’ll see depends on your activities over the past 4-7 days: if you’ve consistently missed your sleep goal, UP 3.0 might issue you with the challenge to go to bed earlier, tracking how well you do at that along the way. 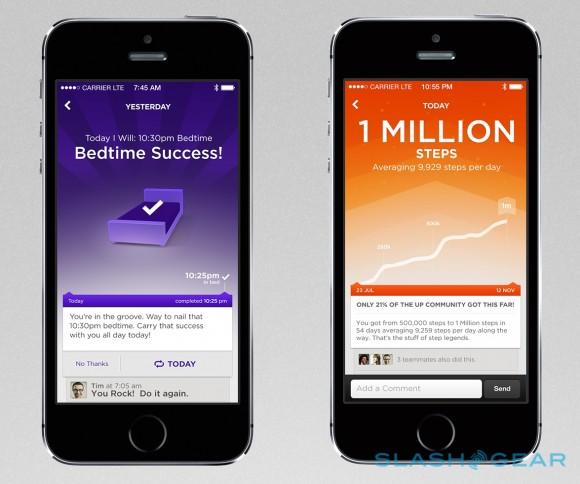 The real-time communication between UP 3.0 and UP24, meanwhile, means the app can give live feedback, too. For example, if you’re getting close to your daily steps goal, it can ping you with a reminder to “nudge” you toward completing that goal; if you’ve accepted a “Today I Will” challenge, the app will use a push notification to remind you when your bedtime approaches. Alternatively, timely recaps – such as how much sleep you got the previous night, and the overall quality of it – can be surfaced too.

In fact, one of the most welcome features addresses what was among our biggest criticisms of the original UP system: how it handles sleep tracking. Previously, if you forgot to put the band into sleep mode, it would assume you were still awake (but just terribly lazy): UP could figure out if you had got up and not switched back into day mode, but not intuit when you went to sleep. It meant we periodically lost a few days of sleep data every few months. 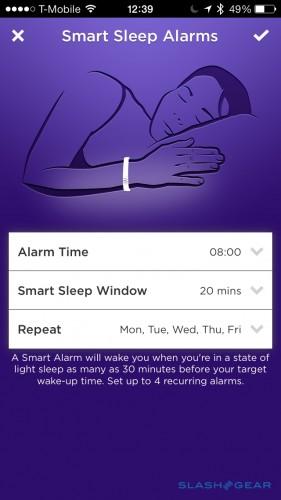 Now, though, UP 3.0 offers sleep recovery. If you forget to switch modes manually, once you wake up the app can give you an estimate of when it thinks you fell asleep and when you woke up. Each can be manually adjusted, and then the app will automatically figure out light and deep sleep phases for that period.

UP supported sharing between teams of wearers and social networks before, but now Jawbone has added more notifications to mark streaks and milestones. That’s part of how the company aims to prize consistency, Kittredge told us: based on your lifetime data using the app (even if you upgrade from UP to UP24), it will flag up three, five, and seven day achievements of step and sleep goals, as well as tell you what percentage of other UP wearers have managed that. Milestones are more longer-term, celebrating things like 1m steps taken.

As before, there’s food logging, which requires you to hunt through Jawbone’s database of foods and record exactly what you ate and how much of it. It works, but it’s a time-consuming thing to do, and we still can’t see it being widely used.

For those new to the platform, the $20 difference seems a small price to pay for the extra functionality. UP24 gets not only real-time transfer of data from band to app, but it also allows the app to set Smart Alarms – which promise to wake you up with a discrete vibration at the optimal point in your light/deep sleep phases – without having to plug the band into the phone. 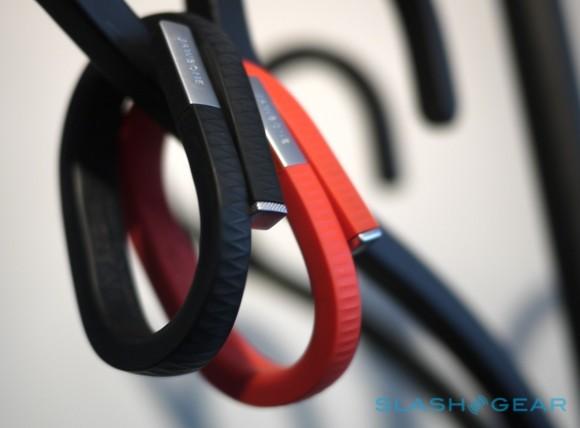 That live data also opens the door to more timely integration with other services. Jawbone has had IFTTT (“If This Then That”) support for a while now, allowing UP events to trigger other services ranging from Google Docs or Evernote logging, through to sharing goals on Facebook and more, but with real-time communication there’s more that can be done with your data. For instance, waking up could trigger a remote-controlled outlet to turn on your coffee machine. 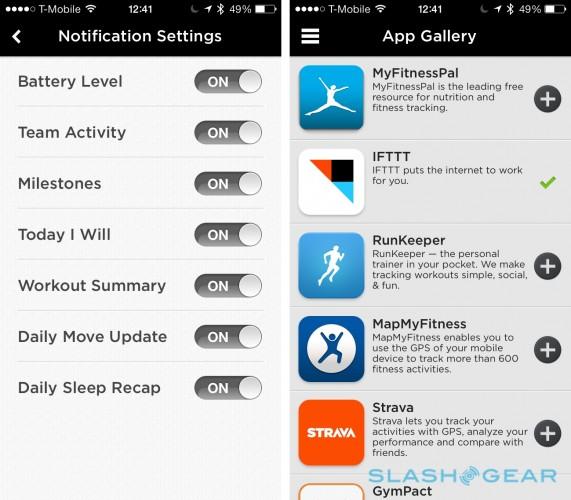 Not everybody needs that sort of smart home integration, however, and nor does everybody need a live record of their movement in UP 3.0’s pull-down Activity Log. Existing UP owners get the new app as a free update, and that brings with it everything bar the real-time data. Unless you’re addicted to seeing exactly where you’re up to with your current goal, we’d suggest living with UP 3.0 for a while before you rush to upgrade the hardware.

There’s no shortage of fitness trackers out there. UP24 goes up against Fitbit’s new Force, Nike’s Fuelband SE, and numerous other models from lesser-known brands. It also faces a growing challenge from software: the iPhone 5s and Nexus 5 each promise more precise movement data from their various sensors, but apps like Moves and Runtastic work across most iOS and Android devices, and at a fraction of the price of dedicated hardware. 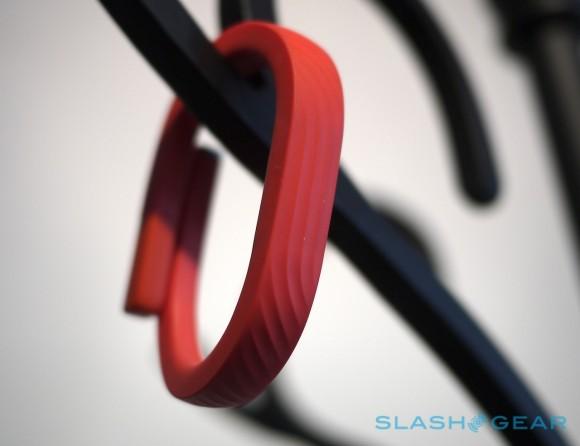 Still, there are times and places where phones can’t go – we don’t recommend taking your iPhone into the shower, for instance, and many would rather not carry it while running, either – and there proper wearables make more sense. There’s something to be said about the physical reminder to be mindful of health and movement, too, which many find is easier when they have something on their wrist.

With so many devices offering the same logging functionality, their relative merits hinges perhaps more on how they use the data they collect. The interest level in a list of how many steps you took today and how that compares to yesterday soon wanes. There, Jawbone’s more qualitative analysis and habit-changing challenges give it an edge over rivals, encouraging you to stick with UP24 for the long term.