Jawbone’s newest Jawbone Bluetooth headset has arrived, the Jawbone ERA, evolving the discrete styling of the ICON and taking its place at the top of the company’s range. There’s more than just good looks promised, though; Jawbone has also slotted in a bigger speaker for HD Audio, together with an accelerometer for more intuitive control. Is it enough to warrant the $129.99 price tag? Check out the full SlashGear review after the cut.

The Jawbone ERA is longer than the ICON, which shifts the microphone closer to your mouth, but the physical controls have been streamlined thanks to the addition of an accelerometer. Jawbone call it Motion-X, but it’s basically a way to kick the headset easily into pairing mode – “ShakeShake” – or answer/end calls – “TapTap” – by shaking or tapping the body of the ERA. Power on and shake ERA four or so times and it will automatically go into pairing mode; then, when you’re wearing the headset, a brisk double-tap will answer incoming calls. 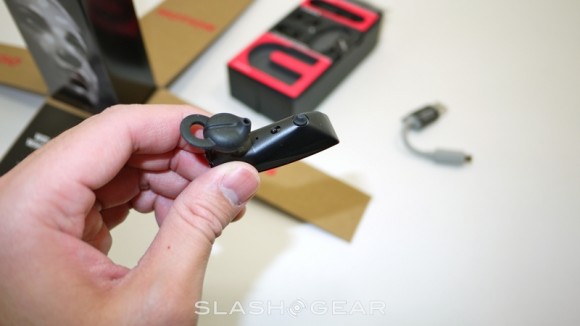 Inside there’s Bluetooth 2.1+EDR with headset and hands-free profile support, as well as (mono) A2DP, and Jawbone reckon up to 33 feet range. Multipoint support means the ERA will remember up to eight paired devices, of which two can be simultaneously connected at any one time; that means you can have your cellphone and your laptop paired, and handle voice and VoIP calls with the same headset.

In the box there’s the ERA, four round earbuds for use with the easily-detached ear hook, four different earbuds with integrated rubber hoops for when you don’t want to use the ear hook, a short microUSB cable, carry pouch and a USB AC adapter. Unlike previous Jawbone ear hooks, the loop supplied with ERA is far more flexible which makes for more comfort together with a better fit for those wearing glasses or sunglasses.

As with ICON, ERA will work with Jawbone’s MyTALK online suite of services to extend the headset beyond merely answering calls. Basically, it’s an app store for your Bluetooth headset, and with ERA Jawbone has boosted the connectivity speed so that updates take seconds rather than minutes. That’s useful, because you can now upload your address book to the headset’s onboard flash storage: whereas on the ICON the caller ID was read out as a number by a synthetic voice, with the ERA you hear the caller’s name (Jawbone ERA’s CallerID Function works with ten contacts that you’ve programmed using MyTALK). read out by a proper voice artist. Jawbone tells us it will be adding further voice artist recordings throughout the life of the headset, so names not initially covered – and which will get the robotic voice – will eventually get the premium treatment. There’s also the usual voice-control, the ability to dictate an SMS or Twitter update by voice, and the ability to send a short voice memo to Jawbone’s Jawbone THOUGHTS app.

Audio quality lives up to the solid construction of the ERA itself, putting the headset among the best we’ve tested. Jawbone has used a new wideband speaker – supposedly 25-percent larger – for what it calls HD Audio, along with the latest version of its noise-cancelation tech, NoiseAssassin 3.0. The latter adds automatic volume adjustment and intelligent DSP; with normal voice calls and Skype there was little in the way of obvious processing and simply clear, bright sound. When we tested in more noisy environments, however, such as while driving, the processing shifted into gear and was more ruthless at cutting out background sounds. We prefer the ERA’s performance to that of our previous favorite, Plantronics’ Voyager PRO+, and the Jawbone is more discrete in its design as well. 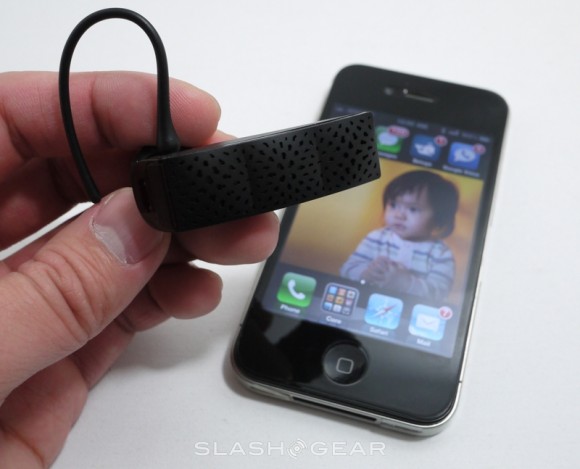 While the ShakeShake pairing system is slick, it’s the tap-to-answer that really makes the ERA straightforward to use. Rather than hunting for a button – or having to press so hard that it hurts your ear or even dislodges the headset – it’s intuitive to gently tap the ERA a couple of times and then start talking. Jawbone tells us that the Motion-X tech on the ERA is simply the first step in how it expects to develop the technology, and the upgrade potential via the MyTALK system means there’s a good chance new motions will be introduced at a later point.

We haven’t had a chance to put battery life to the test properly yet, but will do so over the next week or so. Jawbone claims up to 5.5hrs of talktime or 10 days of standby time. 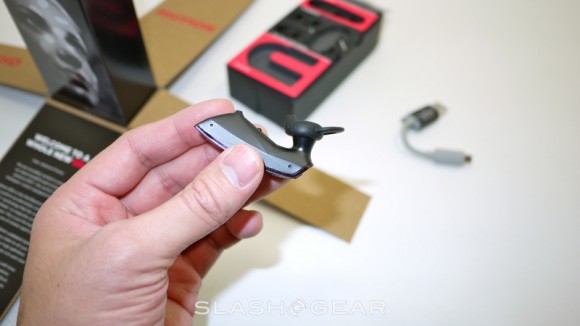 It’s tough not to be impressed by the Jawbone ERA: the HD audio and effective noise-reduction technology take care of the core functionality, around which the solid build quality, innovative use of an accelerometer, and comfortable fit add up to an all-round winner. Jawbone definitely seems to be listening to feedback, and given the upgradable nature of the ERA we’re hopeful the MyTALK platform will mean future software modifications aren’t solely preserved for new headsets.

At $129.99 – available in Shadowbox, Smokescreen, Midnight and Silver Lining finishes – it’s in the premium price range, but the functionality means you’re getting one of the best performing devices for your money. We’d opt for the ERA over the $99.99 Jawbone ICON (which will remain on sale alongside the new flagship) for its boosted HD Audio performance and easier control.