Apple’s new programming language, Swift, has achieved widespread acclaim. While some deride it for not being a “finished product” out of the box, others see the promise of a simpler, cleaner language that can be used for native iOS apps (and hopefully beyond). In a recent survey of Developers via social forum and crowdsourced help center Stack Overflow, Swift was voted the “Most Loved” language. Over 77% of those polled said they already Develop with Swift and will continue to do so.

Seems a bit quick, right? Maybe not.  After debuting at WWDC last year, Apple’s super-simple language immediately saw Developers toying with it. In just over a day, someone had already created a native Flappy Bird clone; nothing groundbreaking, but a proof-of-concept showing Swift was easy and effective.

Earlier this year, RedMonk gauged Stack Overflow and GitHub activity of various programming languages. At the time, they called Swift’s rise up the charts ‘unprecedented’. The champion to Objective-C went form 68th place to 22nd on the list in about three months. 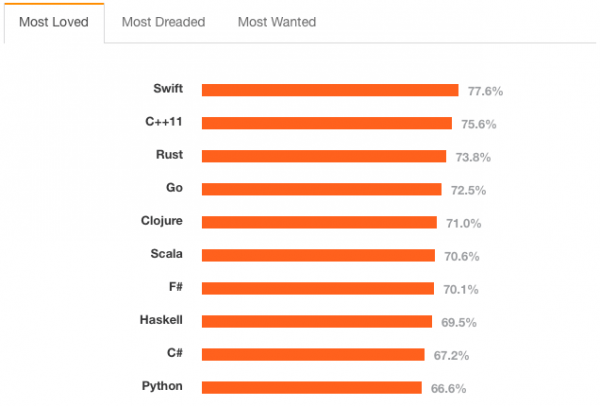 That doesn’t mean Swift has taken over, though. In the same survey, Stack Overflow asked Developers which languages they used most. Javascript continues to dominate that list, while Swift can’t be found in the top 12. Though loved, it means less than 7.8% of Developers currently use Swift.

That metric lends credence to the “it’s not ready” talk, but that’s not really the point. Swift is quickly getting to a point it can be used exclusively for more robust apps, and Stack’s “most used” metric only shows where time is devoted. Once Swift starts rounding into shape with native APIs and the like, things will start ramping up in a big way.