It’s not your imagination: the US and UK Netflix libraries suck

Netflix users were up in arms when the service banned VPNs, and for good reason: depending on where you live, the Netflix library may be pretty crappy. The complaints are most common among US and UK users, and we now know why — the libraries available to both those regions have the lowest number of top movies. A study looking into the numbers found the UK has the lowest among them all.

Any U.S. users who fired up a Canadian VPN can tell you about the land of milk and honey that lies just over the border. As it turns out, you get the most top movies if you look further south to Mexico or Brazil instead, the latter boasting 85 of the top 250 movies as selected by IMDB. In comparison, the UK’s Netflix movie library only has 28 of them and the US is slightly better at 33. 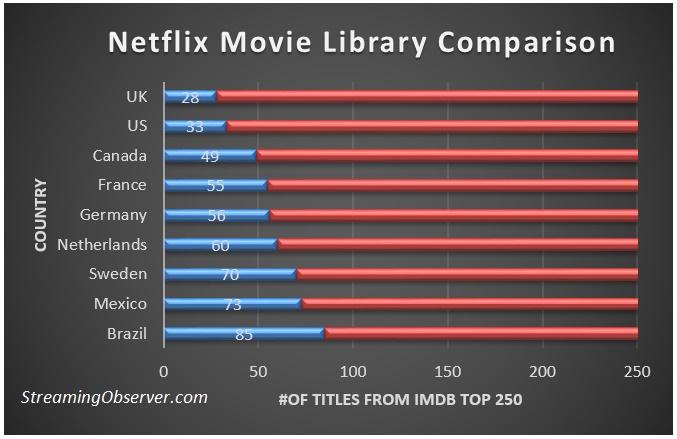 Such information comes from Streaming Observer, which looked at the Netflix movie libraries available in the UK, US, Canada, France, Germany, the Netherlands, Sweden, Mexico, and Brazil. The number of IMDB 250 top movies available in each of those regions increases the further you go through the list.

Of course, how strongly you feel about this will depend on how keen you are about watching these top movies. The study does underscore the general issue with Netflix’s library, though, where it’s much easier to find heaps of bargain bin, low-rated shows and much more difficult to find quality movies.

Netflix has taken steps to address that issue in recent times, but it has been a slow crawl, and the influx of notable movies is sometimes met with the stripping away of other great movies — meaning you have to stay on top of what you watch, or that list you made last month may no longer be available this month.

All of this may become less of an issue in the future, though, as Netflix works on increasing its own original content and giving them preference. The company has more than 1,000 hours of original content planned for next year, and it released about 600 hours’ worth of original content last year. As we heard last month, the company is planning for 50% of its content to be original offerings, with licensed content making up the other half.

This does mean that consumers will have to change their view of Netflix. At one time, Netflix was the go-to source to watch the movies you’ve been putting off. Most people don’t have DVD service through it anymore, though, meaning what’s available for streaming is all you get.

That’s great if you like Netflix’s own shows, but not so much if you’re looking for a service through which you have tons of good quality content available. For many movie lovers, Amazon Prime Video has filled that void.