Is Dual-Touch the Future of Phones and Tablets?

If one touchscreen is good, how great must two be? Tapping into the same part of the brain that screams how geekily-cool Star Trek tablet props are, the allure of a double-display smartphone or computer isn’t new, but neither has it been done right. That’s not stopped various new attempts, however, Acer’s twin-14-inch Iconia Touchbook notebook for one, or the imminent Sprint Kyocera Echo phone for another. Double-vision each may offer, but the manufacturers responsible are still showing serious myopia in how they’re delivering on the twin-touch dream.

In the UK, where the Iconia has been on sale for a couple of months now, Acer says adoption has been “good” among similarly-priced premium notebooks. They won’t share actual sales figures, but it’s supposedly making a moderate splash among the £1,500 competition. With mainstream notebooks selling for a third of that, though, it’s easy to assume that sales have – relatively speaking – been minor. We’re not expecting much different in the US and Canada, where the Iconia will be $1,200 when it goes on sale this month.

Don’t get me wrong, I love the idea of a dual-screen phone or tablet. Microsoft’s original concept of the Courier was brilliant, a true digital book that not only sandwiched larger overall screen real-estate into a clamshell form-factor, but which promised to leverage those two panels in a way one big display doesn’t quite lend itself to. Having two distinct sections gives each workspace a mental boundary: the whole idea of Courier, of having one pane for research and the other for collection, worked because it wasn’t an artificial barrier, it wasn’t just two windows butting up on a single screen. 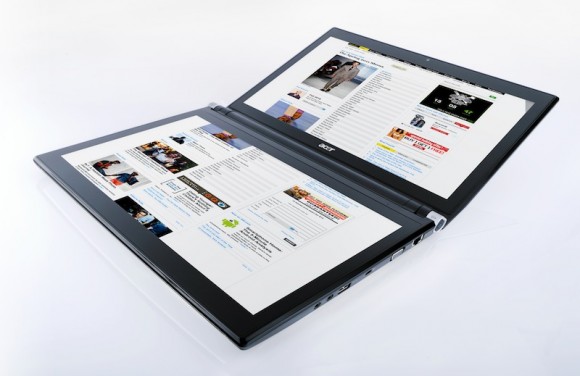 That sense of distinction encourages you to multitask. With a single display, especially on a smartphone, there’s the assumption that whatever software you’re using will be full-screen, and multitasking means hopping between those full-screen apps. With two separate displays, it’s not that you’re halving attention or relative “importance” – as with having a 50/50 split on a single panel – but instead encouraging users to consider the interaction between the apps.

Courier worked – as a concept, at least – because it had a tightly bounded use-case which played on those strengths. Research and workspace, simultaneously viewable. Unfortunately there’s a big difference between concepts and practice.

Where those who have attempted the segment have fallen short has generally been in battery life and functionality. The former is obvious: the display is usually the biggest hog of power in any device, and so when you double up on them you’re going to put even more strain on the average mobile battery. Of course, you can slot in a bigger pack, such as the bulbous lump on the Libretto W100, or bundle a second battery, as Sprint will do with the Kyocera Echo, but neither are particularly elegant solutions.

Functionality is trickier, especially as I’d argue OEMs and software engineers need to be paring back their ambitions rather than adding to them. Where Toshiba went wrong – in my opinion – with the Libretto, and where Acer has gone wrong with the Iconia, is in trying to make them all-things to all-users. Full Windows machines, they therefore demand full x86 processors (rather than more frugal ARM chips) and attempt not only to do the interesting, eye-catching finger-and-touch stuff that makes them unique, but everything a $400 notebook does too. That generally means on-screen keyboards, with all the mediocre tactile feedback which goes along with them.

That desperation to make one device everything to every user means battery consumption goes up, higher-power components are needed, and thus the whole thing gets expensive. Often it’s the software which gets left behind; the dual-displays are considered the draw in and of themselves, Star Trek style selling points which are never really taken advantage of. So far we’ve seen nothing from the Sprint Echo that a big, single-screen Android smartphone couldn’t achieve just as well. Yes, there have been tweaks to run two apps on two screens simultaneously, but beyond that it’s business as usual – only business with double the power drain.

I can’t be alone in wondering whether simply strapping two iPads together – each half having its own battery good for 10hrs+ of runtime – with a hinge down the middle isn’t the obvious solution. TI, NVIDIA, Marvell and other ARM-based chip manufacturers have been showing off multi-display capable SoCs for the past couple of years, each able to run two or more touchscreens while still sipping power. Tablet-scale devices have the room to accommodate the sort of bigger batteries that would make smartphones too chunky for the average pocket or purse, and the ARM chipset support for Android (or other “mobile” platforms) would mean native finger-control without the half measures of Windows 7.

You’d need the right software, though, so how about, instead of a couple of iPads, pairing two HTC Flyer slates. HTC has already finessed Android with active stylus control, Evernote integration and everything else which makes the Flyer unique; all they need to do is double it up and make a slick, dual-7-inch clamshell, a true digital notebook for the internet age. If anybody can do it, segue away from the core, single-screen Android ethos as seen through Google’s eyes, and deliver something sufficiently customized and polished to be appealing both on paper and in practice, it’s probably HTC.

Dual-touch may well be the future of mobile devices, but it’ll take more than a hinge and a reskin to deliver.