It would appear that some massively uninformed iPhone 7 users are falling for a hoax of epic proportions. The folks at TechRax have created a video which suggests – in title, only, really – that there is a secret “hack” to gain access to the iPhone 7’s (perhaps hidden) headphone jack. The idea here is that the iPhone 7 has the hardware it needs to allow a headphone jack, but Apple has just covered up the area we’d need to plug the cord in. Then comes the power drill.

“This video is for those who don’t want to get $159 wireless airpods or have to insert your headphones into an adapter every time you listen to music,” said TechRax, without explaining what massacre was about to happen.

Our host explains (at length) why the iPhone no longer has a headphone jack and suggests that it DOES need one before moving toward the vice grip. Once the grip has gripped the phone, the drilling begins.

If you’ve seen the 1976 film Bloodsucking Freaks (entitled as such after the Troma Entertainment crew got ahold of it), you know what’s about to happen.

While destined to go down in history as one of the most absurd pranks ever distributed and landed upon iPhone users around the world, this video serves its purpose well. It shows exactly what users most certainly should not do. It shows one of the very worst ways to react to the news that Apple’s done away with the headphone jack on the iPhone for good.

Also on the list of greatest – most absurd – iPhone-related pranks ever pulled are such classics as Please don’t microwave your iPhone and iOS 7 Waterproof hoax: it’s not waterproof yet. 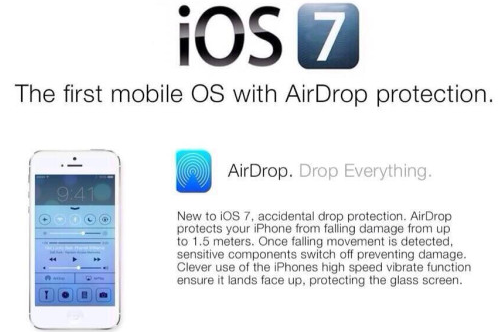 If you’re currently preparing a list for your less-than-informed Uncle Benny, or if you’re an I.T. worker for a building full of foolish beasts, you may want to have a peek at the also-infamous AirDrop Protection hoax, just to be safe.

See below for additional hoaxes, as well.