Apple’s trio of new iPhone models for 2018 could see it sacrifice familiar features in order to offer a budget option, it’s been predicted, with the 6.1-inch iPhone tipped to compromise in unexpected ways in order to stay affordable. Though Apple has, unsurprisingly, not made any comment on its roadmap for iPhone launches this year, the Cupertino firm is widely expected to offer three new models, all more akin to the iPhone X than the iPhone 8 or iPhone 8 Plus.

Indeed, the iPhone X will spawn not one but two high-end models, it’s believed. On the one hand there’ll be a new version of the current 5.8-inch iPhone X, with an OLED display with its distinctive top “notch” and dual cameras on the rear for Portrait mode. Like the existing flagship, it’ll be made of stainless steel.

However it will be accompanied by a larger version, which will effectively replace the iPhone 8 Plus. Unofficially known as the iPhone X Plus, this 2018 flagship will have a 6.5-inch OLED screen, and effectively be a larger iteration of the 5.8-inch iPhone X 2018. That includes the stainless steel body.

What KGI Securities analyst Ming-Chi Kuo is suggesting now, MacRumors reports, is how the third new iPhone for 2018 may differ from those high-end models. It’s arguably a tougher device for Apple to get right, since it’ll need to occupy a lower price point. The company was widely criticized for the $999 starting price of the current iPhone X, but is unlikely to modify that for the 2018 iPhone X, and the iPhone X Plus is likely to be more expensive still. 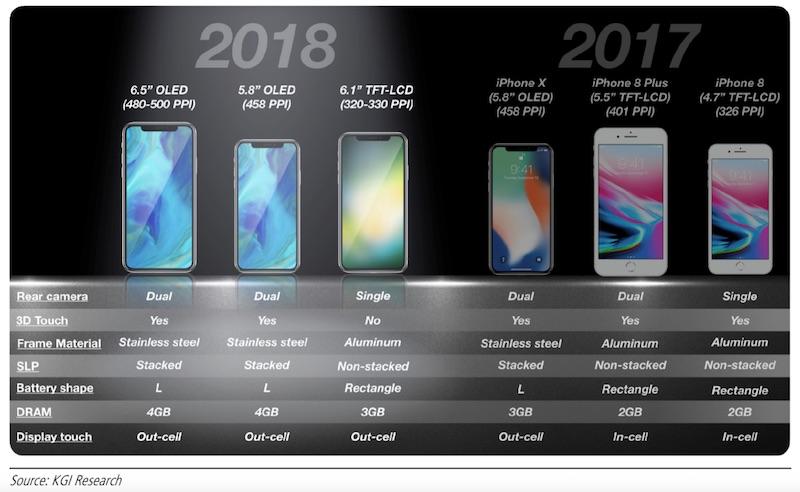 In contrast, the analyst predicts, Apple is targeting a $700-800 price tag for the 6.1-inch iPhone. In order to achieve that, it’ll make some compromises, both on design and internal hardware. The screen will be a lower-resolution TFT LCD panel, though still with the minimal bezels of its more expensive OLED counterparts (and the distinctive notch at the top).

However, it’ll be wrapped in a frame made of cheaper aluminum rather than stainless steel, it’s expected. Face ID will be included, using the TrueDepth camera in the notch, but the expectation is that the rear camera will be a single sensor, not the dual sensor. Unexpectedly, Kuo also says that Apple will leave out 3D Touch, the pressure-sensitivity that allows iOS to trigger contextual menus and more by measuring firmer pressure on the smartphone’s display.

Despite the compromises, the combination of lower price and a distinctive styling change from the iPhone 8 and iPhone 8 Plus are predicted to be strong motivators for buyers in late 2018. Indeed, Kuo believes around half of all 2018 iPhone model sales could be of this cheapest 6.1-inch iPhone version.