This afternoon it would appear that two rather key components to a next-generation Apple device have surfaced, and while neither piece of architecture will be able to be verified as such, it would seem that these two may fit together with one another, if nothing else. It’s being suggested by MacRumors that these two components may be pieces of the iPhone 5S. It’s also noted that, with the hardware shown here, the two do appear to be able to latch on to one another.

As is often the case, the iPhone 5S (as we’ll be calling it here for consistency) does not appear to be bringing any major cosmetic changes to the iPhone 5. This model will be bringing at least a black iteration to the market with the same 4-inch display as the iPhone 5 as well. 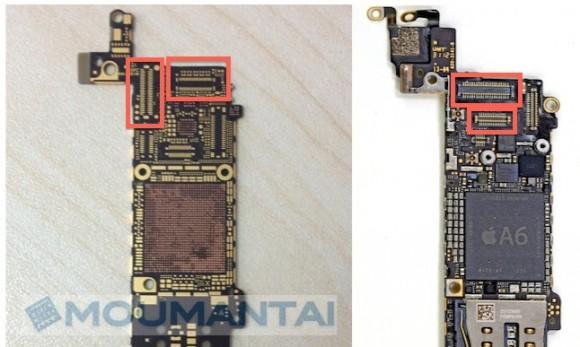 The flex cable that appears sprouting from the display above shows two connectors, one horizontal while the other is vertical. This setup would seem to fit well with the logic board that was also leaked today. These two connection points represent the display and digitizer. The machine itself has been suggested – but of course, again, not verified by Apple – to come with an upgraded camera and a boost in computing power.

This device will likely be revealed on schedule later this year as each successive version of the iPhone has for the past several years. The iPhone 5 brought on a 4-inch display and a thinner body, while the iPhone 5S will likely work with essentially the same thickness and outer bits with improvements under the hood.

The iPhone 5S has also been suggested to be appearing later this year with a companion “budget” iPhone which would work with some amalgamation of parts that would allow it to be released at a lower price point. The budget rumor has been joined by no shortage of mock-ups and suggested plastic body forms, but has also not been substantiated by any entirely solid evidence.