iPhone 5 vs Galaxy S4 early adopter: Devil’s in the details

The battle between Samsung’s Galaxy smartphone line and the Apple iPhone rages on. The folks behind the ad group Chitika have released a new study which incorporates several angles centering on the web traffic of iOS and Android devices. More specifically, today we’re looking at the web traffic generated by the Samsung Galaxy S4 and the Apple iPhone 5 in the months after they were first released last year (and the year before that). 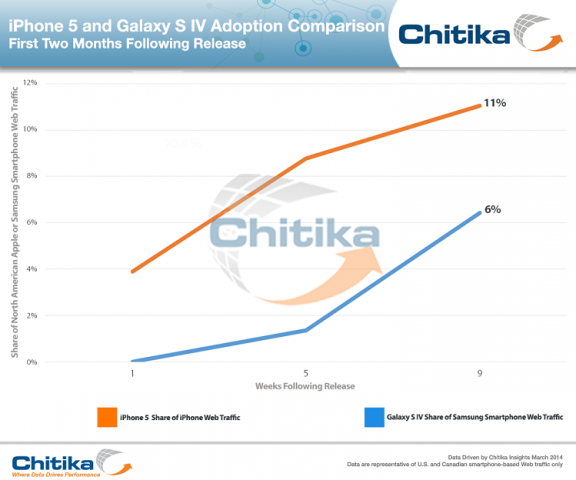 So the comparison here is really how well each device does within its own brand, not exactly one up against the other. Unless both company’s goal was to replace their older phones in the market with newer ones, of course.

Chitika also shows web traffic for both iOS and Android – though their chart mistakenly suggests that the blue line is just Samsung. We know these numbers represent iOS and Android, not iOS and Samsung, because we spoke with Chitika back in March when they first released the numbers shown at the start of this chart. Back then, iOS vs Android was a very similar battle. 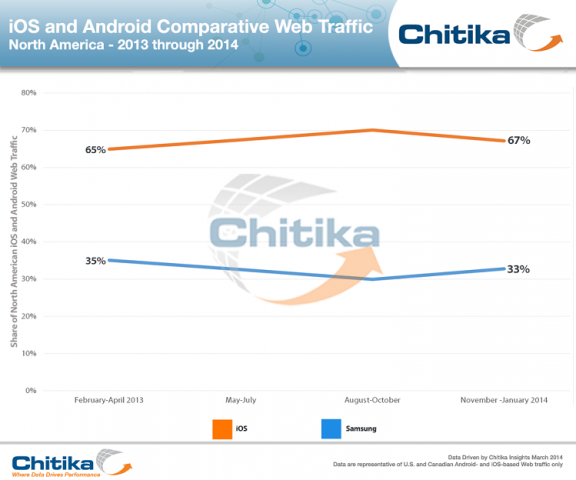 Since March 2013 (or the span between February and April, if you prefer), you’ll find that Apple’s mobile operating system took a bigger chunk out of the web traffic total, then fell once more – the opposite happening for Android, of course. Our most recent reading here shows Apple to have gained a couple of percentage points since March of 2013, while Android has gone down by two.

So what does this all tell you, the consumer? It suggests that mobile web traffic hasn’t changed a lot over the past several months. It also suggests that both Samsung and Apple have customers that like to upgrade to their newest device when they arrive – not much else.