Earlier today the folks at Chitika showed off their newest chart of impressions from Android devices, showing Samsung taking the cake in a big way. Since its release, SlashGear reached out to Chitika for more data on the larger mobile device market, showing iOS as well. As you’ll see, while Samsung dominates Android, Apple’s iOS takes the largest portion of the web traffic market for smart devices.

This first chart shows the days between February 20th and 26th, for a little less than a week. What you’re about to see is Chitika’s chart of impressions made with Chitika advertisements through the web – that’s the mobile web with smartphone and tablet web browsing apps. 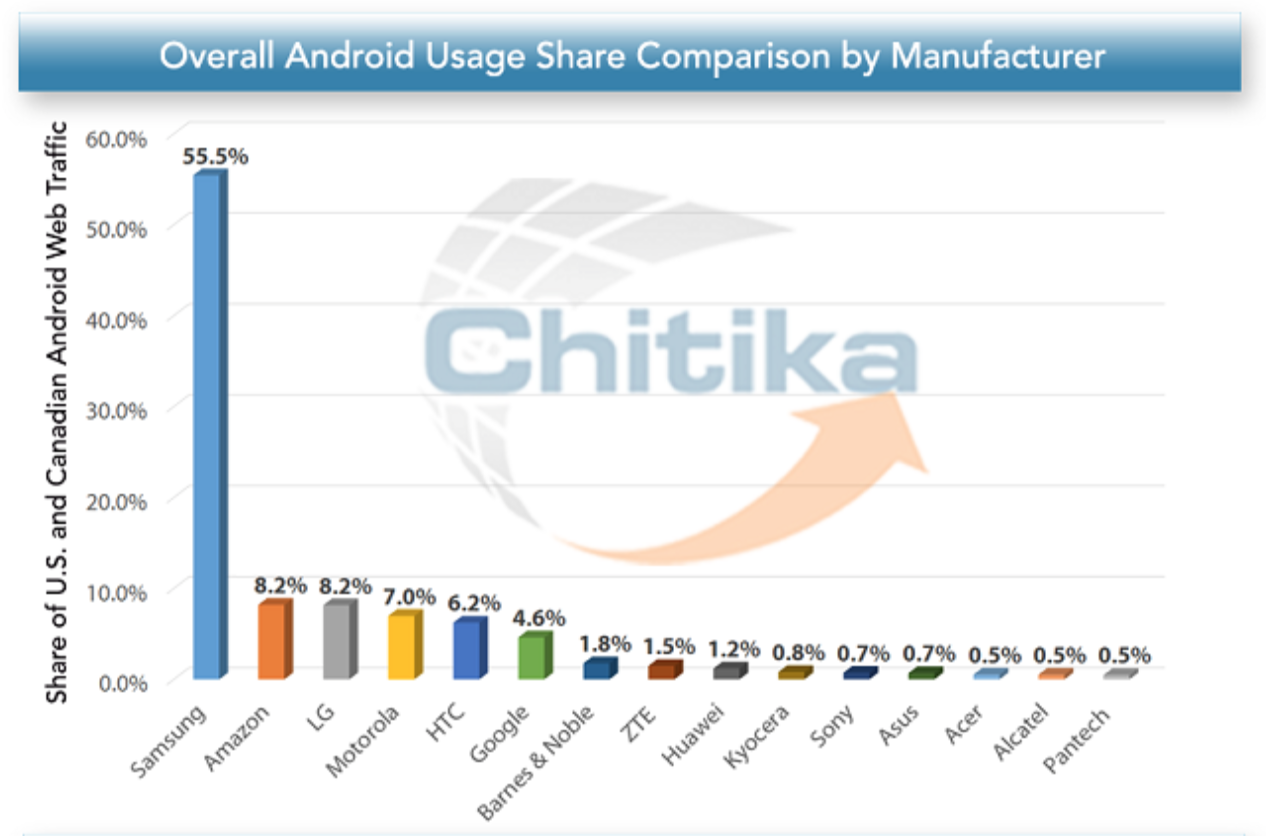 The chart you’re seeing here is of North American Android Web Traffic as marked by Chitika. You’ll find that, were Samsung to take even half a percentage point more in this market, they’d have seven times the traffic that their closest competitor does. In other words – Samsung is absolutely dominating the market according to Chitika.

We reached out to Chitika to see if it were possible that Samsung may have been represented inaccurately in any way – perhaps more Samsung-aimed websites worked with Chitika, as a possibility. As Chitika representative Andrew Waber explains, they “don’t believe we are seeing abnormally high Samsung traffic based on the nature of our sample.”

“Our data is garnered from the ad impression data cataloged across our network of more than 350,000 websites. As an important note, we don’t include any app traffic within our sample. In the case of this study, the total number of Android-based ad impressions studied totaled in the tens of millions – all of them coming from IP addresses associated with the U.S. and Canada.

The sites within our sample range from several in the Alexa Top 10 to smaller blogs. Additionally, the vertical or topic focus of these 350,000 sites is significantly varied – from automotive, to finance, to media/entertainment, photography, etc.

On the statistical front, prior to publication each of our studies is reviewed by one or more independent statisticians on staff. Keep in mind that while our sample is composed of 350,000+ websites and tens of millions of impressions, we are one of many potential sources on a topic, and we can only see what’s occurring on our network.” – Andrew Waber for Chitika

Next you’ll see Amazon and LG taking home 8.2% of the market themselves while Motorola comes next with 7% and HTC brings home 6.2%. Google Android devices – we must assume Nexus devices – take home 4.6% of the market after that. 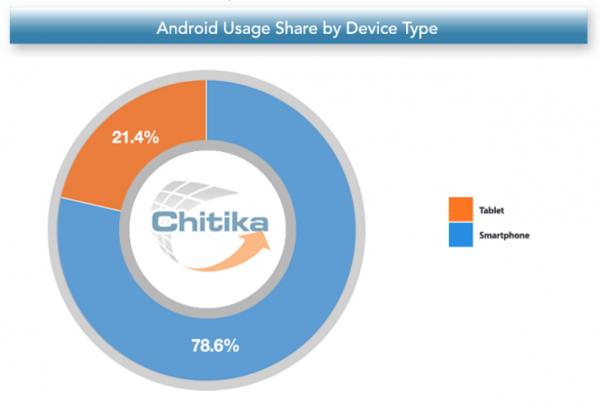 Chitika also shows 78.6% of mobile device market traffic during this period to be taken up by smartphones while 21.4% is taken by tablet. Meanwhile Chitika suggests that Apple still generates “more than three quarters of all tablet web traffic” as supported by their most recent report as well as the one just before that.

As for the iOS question, here we’ve got the days immediately following the study done on Android. This bit of information works with the same sort of study as shown above, only this time showing Android vs iOS.

“In terms of the sample for this data set, we examined tens of millions of North American Android- and iOS-based online ad impressions cataloged within our network from February 26 through March 4, 2014.” – Andrew Waber for Chitika 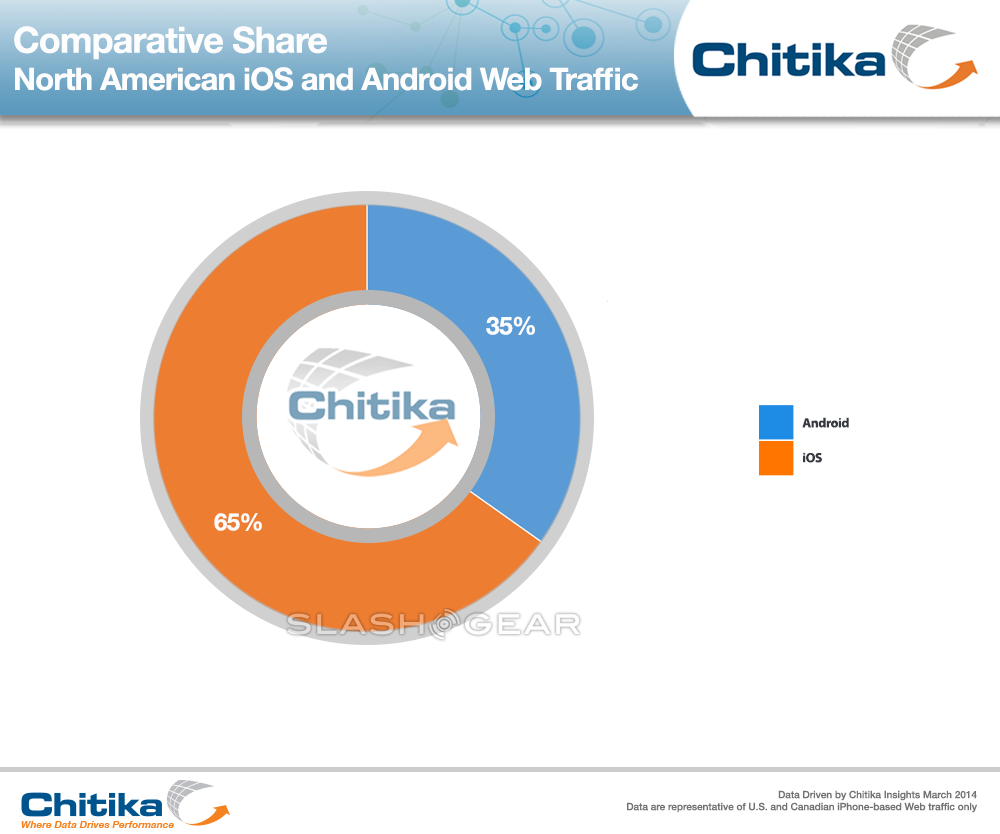 Chitika pointed out also that this data can be compared to a study done by the group back in December of 2012 where they compared iOS to Android in a six-month range. There it was 67% iOS vs 33% Android in the end, this showing us that the two continue to keep basically the same command of the web traffic market regardless of the unit sales growth of either. That’s a 2% transfer from iOS to Android, mind you.

You should take note that this set of graphs still do not include Windows Phone or BlackBerry, and that they’re set during slightly different ranges. Our iOS vs Android provided by Chitika is slightly fresher, starting on the day the earlier study ends.

NOTE: We’d like to thank Chitika for the rapid response to SlashGear’s request for the most current iOS vs Android Data.