While we know good and well it’s more about the full package than it is about any single specification on the device, it’s always interesting to compare one hero device to another. That’s why what we’re going to do here is to take Apple’s current best in class, the iPhone 4S running iOS 5, and compare it to the Lumia 800, the newest Nokia hero running Windows Phone 7.5 Mango, also Microsoft’s newest mobile OS. Will this device that looks RATHER similar to what we’ve seen in the Nokia N9 MeeGo device be able to run Windows Phone successfully enough to take a cut into the iPhone’s mighty market share?

Both the Nokia Lumia 800 and the iPhone have rather unique looking casings going on. With the 800, you’ve got a solid piece of polycarbonite and a single piece of curve-edged glass up front on top of a 3.7-inch display and the three standard Windows Phone buttons. With the iPhone, you’ve got a 3.5-inch display covered with a single sheet of flat glass, glass on the back of the device as well, and an aluminum ring around the edges. The iPhone design as well as the design of the 800 have been called perfectly suited for the hand by Vincent Nguyen and Chris Davies, so where do we go from here? 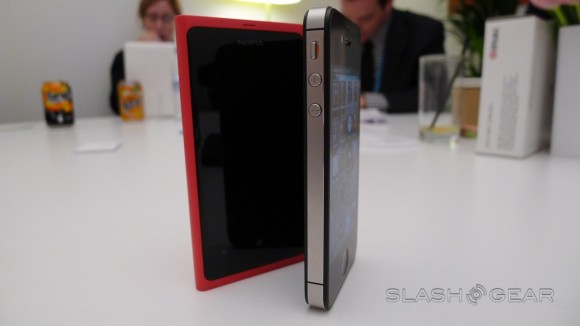 We could note that the iPhone has an app store with several hundred thousand apps in it, each of them hand-approved by Apple, the Windows Phone device has a tiny market in comparison – again the apps are well curated, but the point is of course that the Apple device has an undeniable gigantic following of developers while Microsoft has yet to find even a fraction of the support for their own platform. On the other hand, with Nokia jumping in on the Windows Phone 7.5 Mango game, there might be hope yet. 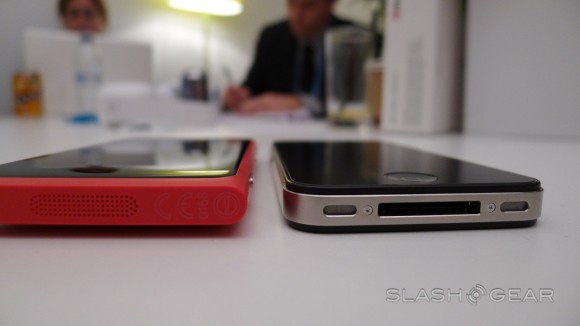 If we can rely on the several casing colors of the Nokia N9 to move over to the Lumia 800, we’ve got a much larger array of choices for the actual physical phone’s look than the iPhone who currently still only comes in black or white. The iPhone is flat on all sides with curved corners while the Lumia is “pillowy.” Then of course the Nokia manufacturer stance on Windows Phone is that it’ll drive them through the next few years at least, this device one of the first TWO they’ve ever made with the software, while Apple has only ever had the iPhone.

Check out our hands-on with the Nokia Lumia 800 as well as our full review of the iPhone 4S if you want to compare specifications any closer than we’ve done here, and check out the videos below to see how these devices look in the hands and tap under the fingers. Are you deciding between the two?

Bonus point: the Nokia Lumia 800 will be rolling out in stores by November internationally, but this first release wont include the USA. That affect your decision any? It sure as heck does mine.