The flip side of entertaining teardowns is the bill-of-materials (BoM) assessment, and while we’ve seen the iPhone 4 reduced to its constituent boards (and beyond, if you don’t mind grey dust) it’s taken a little longer to do the sums.  iSuppli reckon the components for the Apple smartphone cost the company $187.51 for the 16GB version.

That’s just under $17 more than the iPhone 3GS estimate back in 2009, but around $30 less than iSuppli reckon each original iPhone cost Apple in parts all the way back in 2007.  Unsurprisingly it’s the 3.5-inch IPS Retina Display that costs Apple the most in terms of an individual part: $28.50, iSuppli say, or just over 15-percent of the entire BoM.

Meanwhile the Apple A4 SoC is a $10.75 component, the 16GB of Samsung flash is $27 and the 5-megapixel autofocus camera – which Apple said had been specially selected because it maximised pixel size – just $9.75.  Obviously on top of that Apple has to pay Foxconn to manufacture the iPhone 4, pay for software development and everything else. 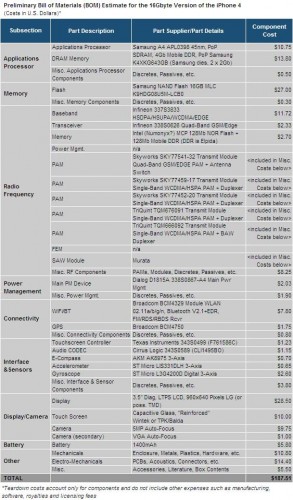