It’s time to have a peek at a few pre-made cases for the fabled iPad mini, a device which Apple has not yet confirmed the existence of, but which appears to have made the rounds in case-form fashion to case manufacturers. This device, if we’re to believe the cases we’re seeing here and now via IorN, have a camera on the back near the power button on top with no LED flash to speak of. It also appears that this tablet will have at least a 7-inch display if not larger.

This device, again if these cases are to be any indication of the real final product, will have a mini dock connector as opposed to the original 30-pin iPod dock. It’ll also have two microphone holes, one on the top and another near the top on the back for noise cancellation. This device also has a headphone jack at the top on the opposite side as the power button. 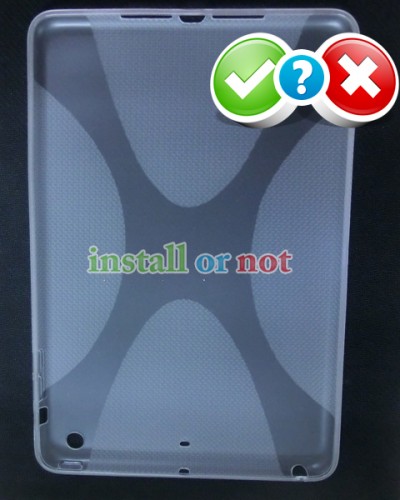 Apple has long been rumored to be creating a miniature version of the original iPad but hopes were dashed when Steve Jobs gave his infamous “sandpaper” comment during an earnings call back in October of 2010. The important bits of this talk are here, courtesy of Miguel Helft of CNN Fortune:

If you take an iPad and hold it upright in portrait view and draw an imaginary horizontal line halfway down the screen, the screens on the seven-inch tablets are a bit smaller than the bottom half of the iPad display. This size isn’t sufficient to create great tablet apps in our opinion.

Well, one could increase the resolution of the display to make up for some of the difference. It is meaningless, unless your tablet also includes sandpaper, so that the user can sand down their fingers to around one quarter of the present size. Apple’s done extensive user-testing on touch interfaces over many years, and we really understand this stuff. There are clear limits of how close you can physically place elements on a touch screen before users cannot reliably tap, flick or pinch them. This is one of the key reasons we think the 10-inch screen size is the minimum size required to create great tablet apps.” – Steve Jobs

Much more recently, on the other hand, a Samsung lawsuit revealed that Jobs may very well have been “very receptive” to a smaller iPad. At the moment we’re all still a bit suspicious and doubtful of an actual smaller iPad as such a device wouldn’t be very “Apple” when it comes to one hero device per hardware category. On the other hand, we’re in an age where Apple releases two versions of the MacBook Pro, one with a Retina display, one without, at the same time. So anything is possible!

Have a peek at our timeline of iPad mini stories below to put together the whole puzzle before the device actually gets revealed by the company!