The fifth generation full-sized iPad appears to be popping up this week for the first time in schematics – not the average leak vehicle, to be sure. Information included in this set of plans suggests that the upcoming iPad model will take on many of the characteristics of the iPad mini, especially those at the edges of the machine, slighter body and all. This machine would be ever-so-slightly less tall and wide than that current-generation iPad and would be about 3/4 the size in thickness.

This device appears – according to the images shared by NWE, to shave off around 1/4 of the thickness that is in the wi-fi edition of the iPad 4 (the current generation machine on the market today.) This device also appears to be thinner – however slightly – than the iPad mini, with corners and edges that essentially match those of the smaller tablet. 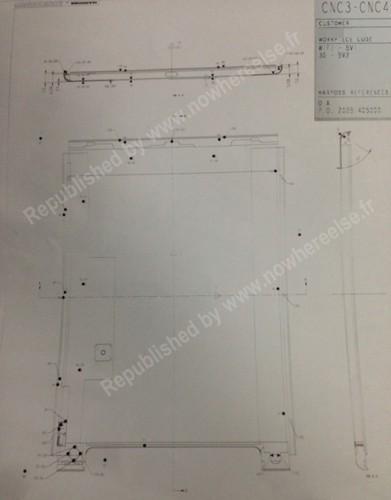 This same source – said by NWE to be “undoubtedly proven to be reliable” in the past, shows the iPad 5 to have a 7.9mm thickness, 232mm length, 178.5mm width, and may or may not include the display in these measurements.

That factoid – the idea that this set of schematics may have some millimeters added to it when the display glass is added in the end – could very well put the thickness back up to the same size as the iPad mini. That’s still significantly thinner than the iPad 4, of course.

The release time for this machine has been suggested to be right in-between mid-September and the end of October, this lining up generally well with past iPad releases. This release will likely be joined by iPod and/or iPod touch device reveals as well.

ALSO NOTE: This leak matches up extremely well with a previous leak of the iPad 5’s iPad mini-like corners and bezels.