Finding something the whole family can agree on at Christmas is usually a nightmare, but it seems as long as what’s in giftwrap is rectangular, has a 9.7-inch touchscreen and an Apple logo, then kids, teenagers and adults will be happy. Market researchers Nielsen claim Apple’s iPad is the most coveted gadget, rating the highest for buying-interest over the next six months in both the 6-12 and 13+ brackets. Non-Apple tablets, meanwhile, languish behind in fifth place.

Younger people seem to be Apple-holics, in fact, with their top three must-haves being from the Cupertino company’s stable. For the older people surveyed, a new computer or a new ereader took joint second place, while a new TV is in fourth place. Gaming hardware, perhaps more traditional holiday fare, has drifted down the charts considerably.

The stats are particularly interesting when viewed alongside recent suggestions by analysts that Apple would have to resort to iPad 2 price cuts if it wanted to maintain buoyant sales, while sources in the supply chain claimed easing demand had forced a cut in production. That could well be Apple ramping up for iPad 3 production, however, with the company tipped to launch a third-gen tablet in early 2012, complete with a new high-resolution display. 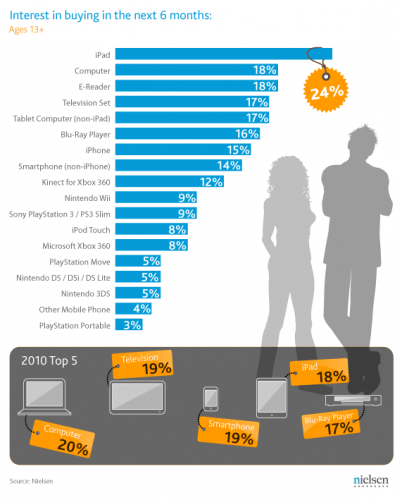