Apple just released iOS 9 beta for its testers so now we’re getting to hear about all the hidden gems that Apple has left for treasure seekers to find. One of those, apparently, relates to Apple’s latest high-profile, and somewhat contentious, service: Apple Music. Now the app’s settings reveal an option that will allow users to switch over to higher quality audio even when they are on cellular data, presumably to afford higher audio quality. Of course, this will come at the expense of data usage and, eventually, higher bills.

Apple made it no secret that it does control the bit rate of the music tunneling through the Internet based on the device’s connection. If Apple Music detects that it’s connected through Wi-Fi, it will have very little regard for any data cap. Conversely, if it’s running on cellular data, it will switch to a lower bit rate to cut down on data usage. It’s not an uncommon practice and many will perhaps appreciate how this automatic feature saves them from bill shock.

However, not all smartphone users are the same and some might be less conscientious about their data usage. These people would prefer to have the decision left to them. Normally, Apple is known for deciding on behalf of the user, but this time it was willing to yield. In iOS 9, Apple Music users can opt to switch to high quality bit rate even when they’re on cellular data, with a warning about possible costs and slightly longer startup times for songs. 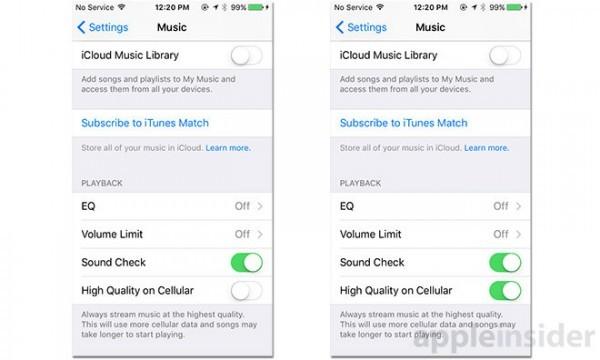 Of course, this all presumes that higher bit rates equate to better quality and some content that, with today’s compression technology, that might no longer be absolutely true. At least the option is now there for those who dare. After all, “high bit rate” might be a better marketing term than having to explain compression and music formats.