Following the iOS 8 Beta 2 release back on June 17, Apple has pushed out the next iteration, iOS 8 Beta 3. As expected, the update brings improvements and new features, including changes to iCloud Drive, a new wallpaper, and an opt-in for App Analytics, among others.

There are a lot of changes, fixes, and known issues in the Release Notes. Accordingly, T-Mobile subscribers who nab iOS Beta 3 can utilized WiFi Calling, the feature that allows one to make calls over WiFi. There’s also a new iteration of Find My Friends. 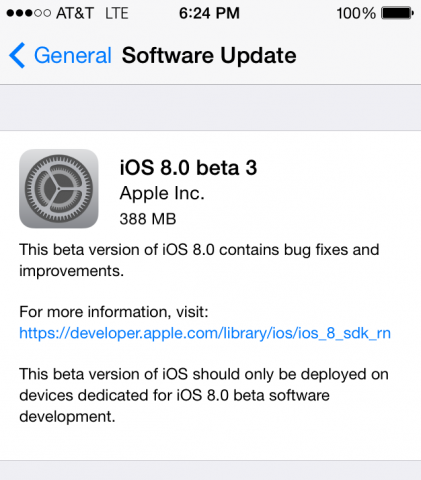 As mentioned, iCloud Drive changes have taken place — users will see an option to upgrade to iCloud Drive, and according to the notes, may also find issues with automatic syncing and “up to two minutes” for signing in. Apple says a workaround to the syncing issue is rebooting the mobile device.

Some keyboard changes have taken place, as well: there’s a way to toggle QuickType with the latest beta release, for example. Other smaller tweaks include Shared Photo Streams being dubbed Shared Albums and weather data being presented with a shift in its layout.