This afternoon an over-the-air update to the iPhone has been appearing for users across the USA, this upgrade including an issue “that could impact cellular performance and reliability” in the device. At this very moment it appears that the iPhone 4S will be included in the first wave of upgrades and that no other issues are being listed by Apple as the software change comes about. This update comes through less than a month after the initial iOS 6.1 update hit iPhones around the world.

If you’re wondering if your iPhone has an upgrade available, you’ve only to go to your settings and head to “Software Update”. From there you’ll find either an update available to you or a wait in front of you. Don’t fret if nothing is up for you right this minute as the upgrade has just begun to roll out this afternoon – no worries! 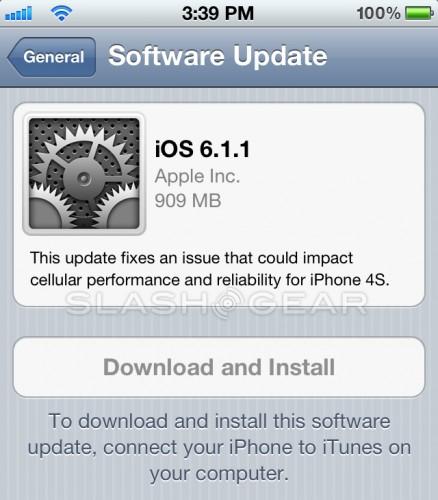 This update also comes just days (or hours, in some cases) after a set of warnings and/or messages urging users to skip the iOS 6.1 upgrade were released by carriers like Vodafone. Also in the mix was (and is) evasi0n 1.1, a rather popular jailbreak system that works with iOS 6.0 and 6.1 specifically. Now we get to see if this update breaks that break and that team has to break it all over again.

Meanwhile it appeared that iOS 6.1.1 started to be released back on the 6th of this month, so we’re not long for a wide release without a doubt. Have a peek at the timeline below for additional iOS news from this past week and keep up to date on your devices – update and upgrade daily!

Thanks for the tip, Jake!