An entire online group exists that tasks itself with scouring space photos for any oddities they can find — ancient alien pyramids, Mars creatures they’re positive NASA is keeping hidden, and other fun things. Every so often the collective reveals a new finding — we’ve seen the Mars ‘crabs’ and the space ‘rat’ and other things. The latest image supposedly shows an alien’s face.

While admittedly the Mars crab photo was pretty interesting, considering that the ‘crab’ looks like a large insect and is shaped differently than the rest of the surrounding environment, this latest finding is disappointing. In fact, it’s just a rock. Yes, the end of the rock does look like the side view of a human-like face, but it’s not. It is very clearly a big rock. 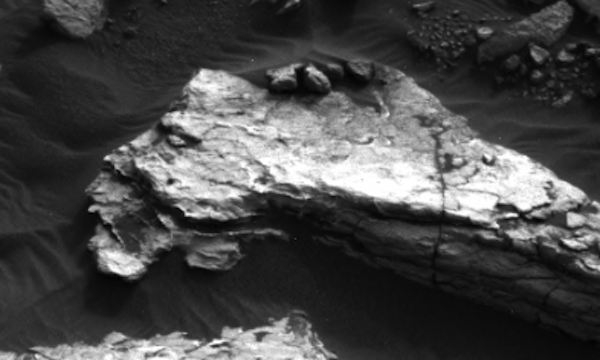 The photo ‘face’ was spotted by UFO Daily, the same source responsible for the crab photo and some others. The photo was apparently captured by the NASA Curiosity Mars Rover, and definitely positively shows an ‘intelligent species.’ The site doesn’t think the rock itself is a face — as in an actual preserved physical alien head — but rather some kind of sculpture left partially preserved among Mars’ remains.

We’ve seen that line of thinking in the past — that Mars is home to ruins left over from some long-gone civilization, and that NASA is purposely hiding these ruins. However, the space agency sometimes misses the ruins and one makes its way into a public photo (or so the conspiracy theory goes). Do you find these photos amusing? Here’s one that supposedly shows the remains of a large statue, and we can’t forget about the floating spoon.