The widespread Windows 7 RC release has meant many users attention turned to the OS’ recently-announced Windows XP Mode, only to discover what Microsoft had warned from the start: many processors won’t support it.  XP Mode requires hardware-assisted virtualization, which means the CPU must support either Intel VT or AMD-V technology, and the motherboard BIOS must have it enabled.  What many Intel users are discovering now is that their CPUs – even high-speed processors still on sale now – don’t support Intel VT, and as such XP Mode can’t be used.

The issue appears to be one of marketing and product differentiation, with Intel disabling VT support on certain processors in its ranges so that it can hit various price-points.  That means price, clock speed and number of cores isn’t a sign of whether VT is enabled: high-spec dual-core CPUs can have VT support, while low-spec quad-core CPUs do not, and if the buyer is busy balancing price versus performance they may not realize what’s omitted.

Intel’s own confusing spec sheets don’t help matters, and nor does a public lack of understanding about virtualization.  This is ironically not so much Microsoft’s fault as it is the chip manufacturers, but you know who’ll get the lion’s share of the blame.  Thankfully ZDNet’s Ed Bott has put together a list of which Intel processors currently support VT; you can find it here, but be warned, Intel are about to change things up again.

“Even the cpu listing does not help in a lot of cases. For instance Sony disables VT in the BIOS of their VAIO laptops even if the CPU in the system supports it. Potential buyers won’t even be able to see this on the packaging before buying” 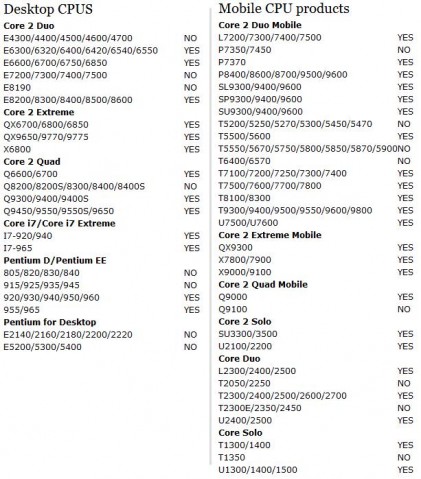