The barrier to Android development is already low, but concentrating your efforts with one particular manufacturer can pay dividends. That’s the message from HTCdev, HTC’s “built by developers, for developers” outreach program launched this year. SlashGear caught up with Bruce Jones and Leigh Momii from HTCdev at Droidcon UK last week, the developer evangelism team’s biggest public outing to date, to find out why independently cultivating coders could well be HTC’s best strategy to stay relevant in Android.

HTC CEO Peter Chou announced HTCdev back in June, at Uplinq 2011, though the project itself has only really been running for the past sixty days or so. In that time the site has seen 500,000 unique hits, though Jones wouldn’t say exactly how many of those went on to register as developers. Initially, HTCdev is focusing on three key areas. Firstly there’s the OpenSense SDK, consisting of APIs and tools to access the 3D capabilities of devices like the EVO 3D, the digital pen on the Flyer and Jetstream, and the common controls in HTC Sense. Second, is the unlocked bootloader, with HTCdev being the central point for people wanting to unlock the core software on their phones. Finally, there’s the kernel download, a mandatory requirement for open-source software providers.

For developers, the promise is hitherto unseen access to HTC’s roadmap, engineers and core software, and the opportunity to create apps that take advantage of the differentiating hardware in some of HTC’s latest devices. Perhaps more importantly, there’s also the potential for access to markets that are currently closed, such as China, where Google’s official Android Market isn’t operational. One of the most common queries from developers, HTCdev told us, is how they can get into HTC Likes and the HTC Hub for distribution on Android devices, a very real possibility for those using the OpenSense SDK.

Cultivating developers is undoubtedly the strategy HTC sees as most likely to maintain its position in the smartphone market. Unlike Samsung or LG, the company lacks a direct link to component manufacturing, leaving it dependent on suppliers for the hardware choices in its devices. We’ve already seen one recent side-effect of that: the HTC Sensation XL’s WVGA resolution was pretty much decided, the company told us, because securing sufficient numbers of higher-res 4.7-inch panels was too difficult today. In the meantime, Samsung is preparing to offer a 4.65-inch 1280 x 720 Super AMOLED HD display on the Galaxy S II HD LTE (and, if the rumors are to be believed, on the incoming Google Galaxy Nexus). Motorola, meanwhile, has all the benefits of being Google-owned to look forward to.

HTC Sense was the first example of the company using custom software services to in effect “lock in” users: after giving owners a taste of the free phone tracking, remote access and other value-adds, HTC hoped they’d be less likely too look elsewhere when it came time to upgrade. Unsurprisingly, then, the HTCdev project is being operated closely in tandem with HTC’s product development, with the software team paying visits to the company’s hardware and software labs to see exactly what’s in the pipeline.

Mention custom software and Android, and the specter of fragmentation is seldom far behind. That’s something the HTCdev team are quick to counter, however: they reckon it’s possible to develop not only with custom hardware in mind, but still for the mass market too. “Differentiation without fragmentation” Jones calls it: apps that work across all Android devices, but better on HTC’s. Developers can choose whether to broaden their appeal by making the pen or 3D capabilities entirely optional, or target it more specifically by baking HTC’s APIs in more deeply. 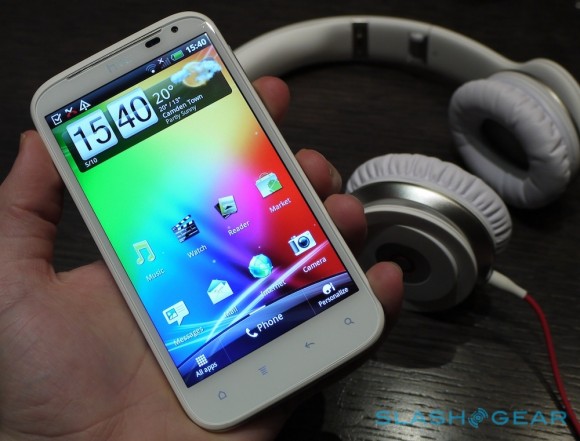 HTC isn’t the only company looking to third-party devs for software support, of course. Samsung’s recently announced Galaxy Note will have an S Pen API SDK, the Korean company confirmed at the oversized smartphone’s launch, allowing coders to take advantage of the digital stylus input option. HTC has “a healthy respect for competition” Momii says, and points out that calls for multiple APIs can co-exist in an app and be summoned depending on the device being used. The company hopes that eventually the APIs will coalesce with Google’s core Android codebase; still, for the moment that leaves some hard work for developers to integrate every API implementation.

[aquote]There’s potential for being one of the company’s key developers and invited on stage, Apple keynote style, to demo your wares[/aquote]

A carrot or two to encourage that isn’t beyond HTC, and indeed HTCdev has a few sweeteners to help seal the deal. “We get very excited when developers use our SDK” Jones admits, “we answer their calls.” In addition to the prospect of extra attention, hardware loans, local testing labs and access to virtualized HTC devices in order to make sure apps run as intended, there’s also the potential for being signed up as one of the company’s key developers and then being invited on stage, Apple keynote style, to demo your wares at the launch of future devices.

Also in the pipeline, the team is pushing for earlier access to APIs and a more visible “what to expect” timeline for developers: giving as much of a heads-up as possible (while still preserving roadmap confidentiality) so that software can be prepared in advance. That’s likely to incorporate a growing HTC device ecosystem, for instance more peripheral and connectivity kit like the MediaLink. “Anything a developer can control, we would like to give access to in apps” Jones says, though refused to be drawn on whether HTC’s growing list of services – including OnLive streaming gaming and Watch video rentals – would mean the company would finally deliver on the “digital home” concept its been hinting at since late 2010.

We finished up by asking Jones and Momii what their own immediate hopes for HTCdev might be. “Log in and give it a try” is the message both had for developers, “show us what you can create.” You can register for OpenSense SDK access here.