Are you ready for a fight? The HTC Sensation and the Samsung Galaxy S II: two smartphones overflowing with superlatives, high-end specs and consumer appeal. We’ve already given the Galaxy S II a thorough going-over and come away mightily impressed, but how does it stand up next to the Sensation, with its extra pixels and polished Sense interface? Read on for round one of what’s likely to be an extended war.

Physically, while the Samsung’s wafer-thin chassis is great in the pocket, the HTC feels better in the hand. Tapering edges, a neatly curved display and high-quality metal and soft-touch plastic make for a device that feels more expensive than the Galaxy S II can manage. It’s thicker – 11.3mm versus 8.49mm and just under a millimeter longer, but slightly narrower too. The more rounded corners belie those measurements, however, making the Sensation feel like the smaller phone. 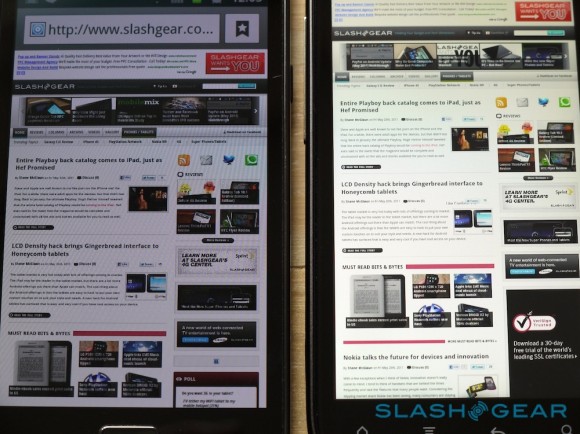 Both companies make plenty of their display technology, and it basically comes down to a choice between resolution or quality. HTC has used a qHD 960 x 540 resolution LCD panel on the Sensation, whereas the Galaxy S II has a lower-resolution, WVGA 800 x 480 screen, but uses Samsung’s own Super AMOLED Plus panel. The extra pixels are most noticeable in the browser and in lists, where the Sensation can fit more on the screen at any one time and, perhaps more importantly, offer more readable text at minimum zoom. In the browser, viewing the SlashGear homepage, we could read the articles on the Sensation with no zooming necessary, something which proved trickier on the GSII.

[Note: I accidentally say the Sensation has 1GB of RAM in the video, whereas it actually has 768MB]

The HTC panel seems to offer brighter whites, but the contrast and colors don’t pop like the Samsung screen. Blacks are noticeably inkier on the Galaxy S II, colors more saturated. It’s clear in the benchmarking comparison shot below, where the colored bars on the Samsung are richer than the subdued-in-comparison HTC. It’s worth remembering, though, that viewed in isolation the Sensation does have a great panel; a streaming trailer in HTC Watch proved particularly viewable, with lots of detail in the picture. Outdoor visibility was easier on the Samsung, with the screen visible even in direct sunlight. 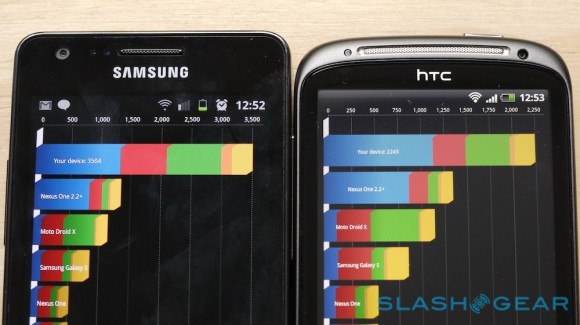 In terms of performance, the Galaxy S II keeps its crown at this early stage. We ran benchmarking tool Quadrant Advanced, and the Samsung scored 3504 overall, with 7119 in the CPU category. In contrast, the HTC managed 2245 overall, with 5918 in the CPU category. I/O is also low, at half the score that the GSII manages. Bear in mind, though, that raw benchmarks generally don’t tell the whole story, and depending on how HTC (and Samsung) throttles its processor, results will vary widely (you can see that in the video above, where both phones get different in a different run of Quadrant; the CPU appears to be so new that Quadrant can’t identify it, either, in the System Info pane).

It’s too early to say whether the Sensation offers enough to take the Galaxy S II’s spot at the top of our Android leaderboard, that will have to wait for the full review. Its display holds up surprisingly well to Samsung’s Super AMOLED Plus, though we’ll have to see whether it can match the GSII’s impressively lengthy battery life. Let us know what else you’d like to know about the two phones in the comments below, and we’ll try to answer as many questions as we can about these coveted devices.