HTC isn’t just relying on the One to turn its 2013 around: the company has the HTC One mini to help with that, a new 4.3-inch version of the aluminum smartphone. Slimming the flagship down – as well as some of the core specifications – the One mini is fronted by a 720p touchscreen where the One has 1080p, but still keeps the UltraPixel camera and Zoe photography system, among other things. We caught up with the new smartphone to see if the One’s undoubtable charms have been distilled down to a more hand-friendly size.

We made no bones about how appealing we found the original One, and in many ways the One mini is the same phone. At first glance you could mistake them for each other – at 132 x 63.2 x 9.25 mm and 122g the actual difference between the two unibody aluminum casings is surprisingly small – and the 4.3-inch screen isn’t far off the 4.7-inch of the first One. 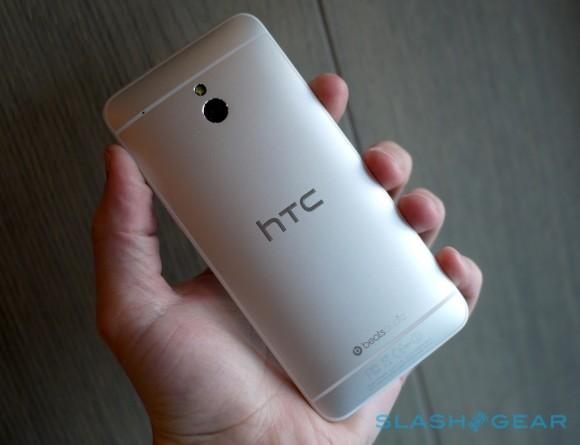 Nonetheless, there are aesthetic changes, most noticeably the plastic frame that runs around the One mini. It combines both matte finishes – on the back – and gloss – on the edges – which is something HTC tells us prompted no small amount of discussion internally. We’re not quite convinced by it, however; considering it’s where your fingertips generally land when you’re holding the phone (which is, otherwise, nicely sized for the palm and shows exemplary build quality), it feels a little cheap, certainly in comparison to the smooth aluminum back and the toughened glass fascia.

It’s a rare blip in the design, however, and in comparison to the Galaxy S4 mini for instance, the One mini is still leagues ahead in aesthetics. With the smaller size, though, you get a shrinking of power: the processor is now a 1.4GHz dualcore Snapdragon 400, paired with 1GB of RAM (versus the 2GB and quadcore of the full-sized One), and there’s just 16GB of storage with no microSD expansion.

There’s LTE and HSPA – complete with a 4G version suitable for AT&T’s bands in the US – along with WiFi a/b/g/n and Bluetooth 4.0 with aptX support, but no NFC since, HTC tells us, there simply wasn’t room for the necessary antenna. HTC BoomSound is accommodated, though, with the stereo speakers upfront, flanking the 341ppi Super LCD display, though the front camera is now down to 1.6-megapixels, and there’s no clever IR blaster integrated into the power button.

Thankfully, there’s still HTC’s UltraPixel technology, which trades megapixels for low-light performance. On paper, the 4-megapixel resolution should be underwhelming, but in practice the physically larger pixels themselves make for an impressive camera; the One mini gets the same f/2.0 aperture and dedicated ImageChip 2 processor, along with 1080p Full HD video recording and HDR video support. What you don’t get is optical image stabilization, which is a disappointment.

There’s also HTC Zoe, the company’s photography system which snaps both twenty full-resolution stills and a 3.6s Full HD video simultaneously. The HTC One mini gets the new Zoe highlight video presets included for the original One in the recent Android 4.2.2 update – in fact, it runs v4.2.2 out of the box – as well as the ability to use 30s of music from a track of your own choosing for the backing. If you opt for your own music, Zoe automatically beat-matches the transitions to the audio. 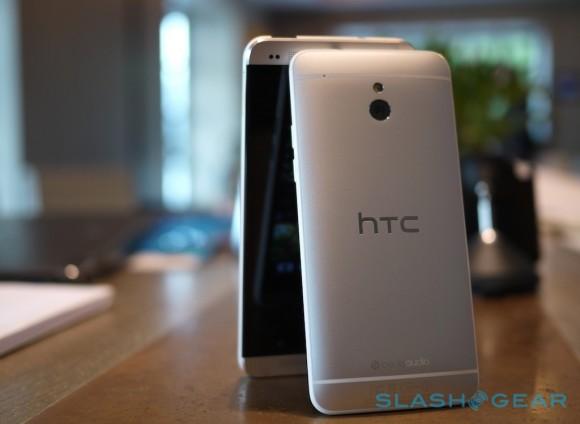 The obvious comparison, perhaps, is the iPhone 5 – something many smartphone users point to when they request a smaller device without compromising on specifications. The HTC One mini is still bigger than Apple’s phone, though (plastic ring aside) it feels on a par with its premium construction. Of course, HTC has diluted the specs somewhat, though the One mini still feels swift, with only minimal slow-down when processing the Zoe highlight reels.

HTC One vs iPhone 5:

There’ll also be various accessories to go with the One mini, ranging from flip-cases (with brightly colored internal lining) to a car kit. That works with the phone’s in-car interface, complete with larger buttons offering access to common features like hands-free calling, navigation, and media playback.

HTC tells us that the One mini is expected to begin its global roll-out in August 2013, in silver and black. There’s no word on which carriers will get the handset – nor which specific countries – though HTC tells us that North American partners will be “announced soon”. Pricing is also unconfirmed, though HTC told us it expects the One mini to come in “two price points below” the original One.

HTC One mini vs HTC One: