HTC has introduced the HTC One M8s, a new mobile offering with a 5-inch FHD display and all the fine trimmings you’d expect: a higher-end camera, high-quality audio, HTC’s own software, and a design that’s the same as the already available HTC One M8 (the latter of which we’ve fully reviewed). The maker is planning to launch the handset in three different colors — Amber Gold, Glacial Silver, and Gunmetal Gray — in different markets. We’ve all the details after the break!

The HTC One M8s features a Qualcomm Snapdragon 615 octa-core processor, 2GB of RAM, and 16GB of storage, as well as a microSD card slot that supports cards up to 128GB. The smartphone is loaded with Android 5.0 Lollipop and includes HTC Sense, as well as HTC BoomSound and HTC Eye Experience (for the camera).

The HTC One M8s has a long talk time, depending on usage, thanks to the included 2840mAh battery (20.25 hours on 3G), and even longer standby, which is up to 753 hours when on 3G. All the expected sensors are there, including an accelerometer, compass, gyro, proximity, magnetic sensor, sensor hub, and ambient light sensor. There’s also GPS and GLONASS. 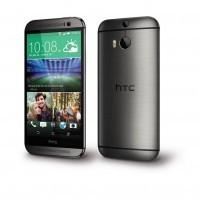