HTC has opened up Duo Shot photos from its One M8 flagship Android smartphone for social editing, with an update to the Gallery app on the phone allowing viewers to adjust the focal point among other tweaks. The new version optionally shares the images enriched with depth data from HTC’s twin camera system through a browser-based version of the Gallery app on the phone itself.

That means others can tweak the same UFocus, Foregrounder, and Dimension Plus effects that until now only the photographer themselves could use. 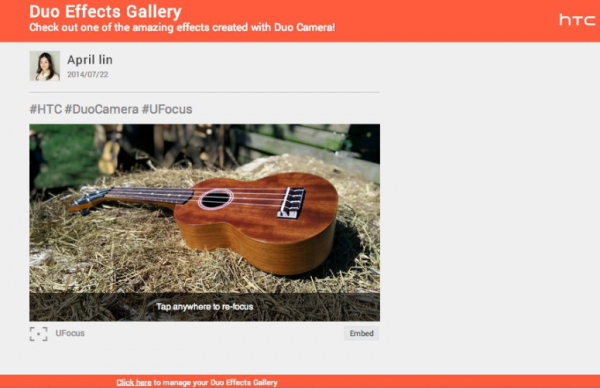 The HTC One M8’s Duo Camera system uses a second, lower-resolution sensor slightly offset with the main camera on the back of the phone, to simultaneously grab depth information on each of the objects or people in the frame. With a little computational work, the phone can then allow for Lytro-style focus changes even after the picture is captured.

Meanwhile, Foregrounder allows the subject to be selected and the rest of the image given a different effect, while Dimension Plus creates an almost 3D version of the frame that can be panned and tilted and then resaved from a different angle.

HTC’s system relies on uploading the raw image to Google Drive (though the company uses its own servers in China, where Drive isn’t available) and then sharing it through there; it’s also possible to just share your own, edited image with no viewer adjustment supported.

There’s more on the Duo Camera system in our full HTC One M8 review, and you can try one of our own UFocus shots below.