Android tablets aren’t exactly in short supply these days. As well as the current big-name Honeycomb slates, like the Samsung Galaxy Tab 10.1, Motorola XOOM and ASUS Eee Pad Transformer there’s no shortage of low-cost alternatives and no-brand upstarts. Into the fray wades the HTC Flyer, fresh to store shelves today and managing to differentiate itself by virtue of its Sense interface, 7-inch form-factor and – perhaps most importantly – digital stylus.

There have been no shortage of pundits proclaiming the stylus dead and the finger-paradigm its successor, and a quick glance at the iPad dominated market might suggest they’re right. Still, after the near-identical Honeycomb tablets we’ve seen of late, the Flyer is enough to have us intrigued. Based on the phone version of Android, Gingerbread (though a Honeycomb upgrade is in the works), it runs the risk of following in the footsteps of the premature Samsung Galaxy Tab, perhaps. 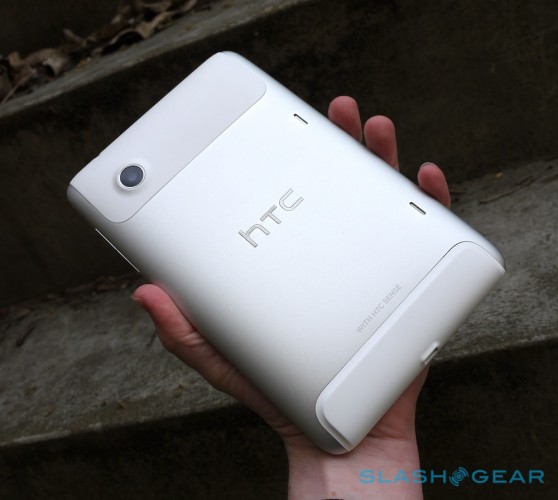 Yet the Flyer’s pen wants to prove it can be more than a relic from resistive touchscreen days, and our first impressions are that it has some promise. The digital ink flows smoothly, despite HTC opting for a 1.5GHz single-core Snapdragon processor rather than the dual-core chips we’re seeing in high-end phones and tablets of late, and the slate is full of neat touches like the twin set of fascia buttons – rotating automatically to suit portrait or landscape orientation – the Evernote integration with its handwriting recognition, and the sturdy, paperback-scale chassis.

It’s not all perfect, mind. For a tablet with such a resolute focus on the pen, the fact that there’s no place – bar the bundled slip-case – to store the stylus is faintly ridiculous. The absence of broad app support for it is also frustrating: you can shoot screenshots by tapping the display just about anywhere in the system, but only a couple of apps will actually allow you to ink into them.

We’ll be putting the Flyer through its paces properly for the full SlashGear review, so until then enjoy the unboxing and hands-on video!