This week we’ve gotten the opportunity to have a peek at three of HP’s newest touchscreen notebooks, each of them having been announced just this week and each of them coming with no less than Windows 8 right out of the box. The first of these is the HP SpectreXT TouchSmart Ultrabook – a device working with a 15.6-inch IPS LCD screen and Radiance Full HD for brilliant visuals. Next is the HP ENVY TouchSmart Ultrabook 4 with a 14-inch multitouch HD display and Beats Audio under the hood. Then there’s the lovely HP ENVY x2, complete with its own detachable tablet PC portion making this a Windows 8 “hybrid PC” – a PC first, and a tablet second.

With the HP SpectreXT TouchSmart Ultrabook you’re getting a full touchscreen experience on a lovely 15.6-inch display and a high quality keyboard and giant touchpad besides. This unit also has a Thunderbolt port for ultra-fast data transfer, and the whole thing only weighs in at 4.77 pounds in the end. It’a also just 17.9mm thick and will be blasting your eyes out with brightness with that IPS technology behind the screen – outdoors time! 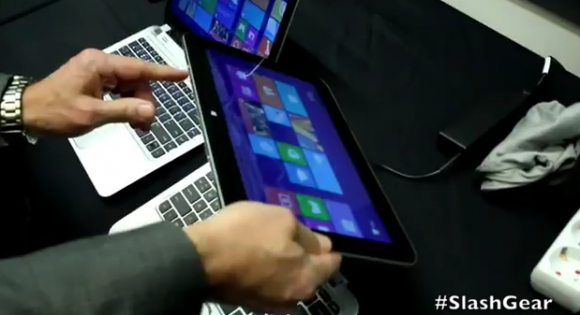 Finally there’s the hybrid PC known as the HP ENVY x2. This device runs Windows 8 as both a notebook and a tablet, with an 11.6-inch touchscreen to make it all bright and optimized for the next generation in HP computing. This device will be coming in at just 3.1 pounds for the whole unit or 1.5 pounds for the tablet on its own. The display on this unit is also rather bright at 400nit working with IPS LCD technology. The HP ENVY x2 also has NFC capabilities – so watch out for the wireless future!